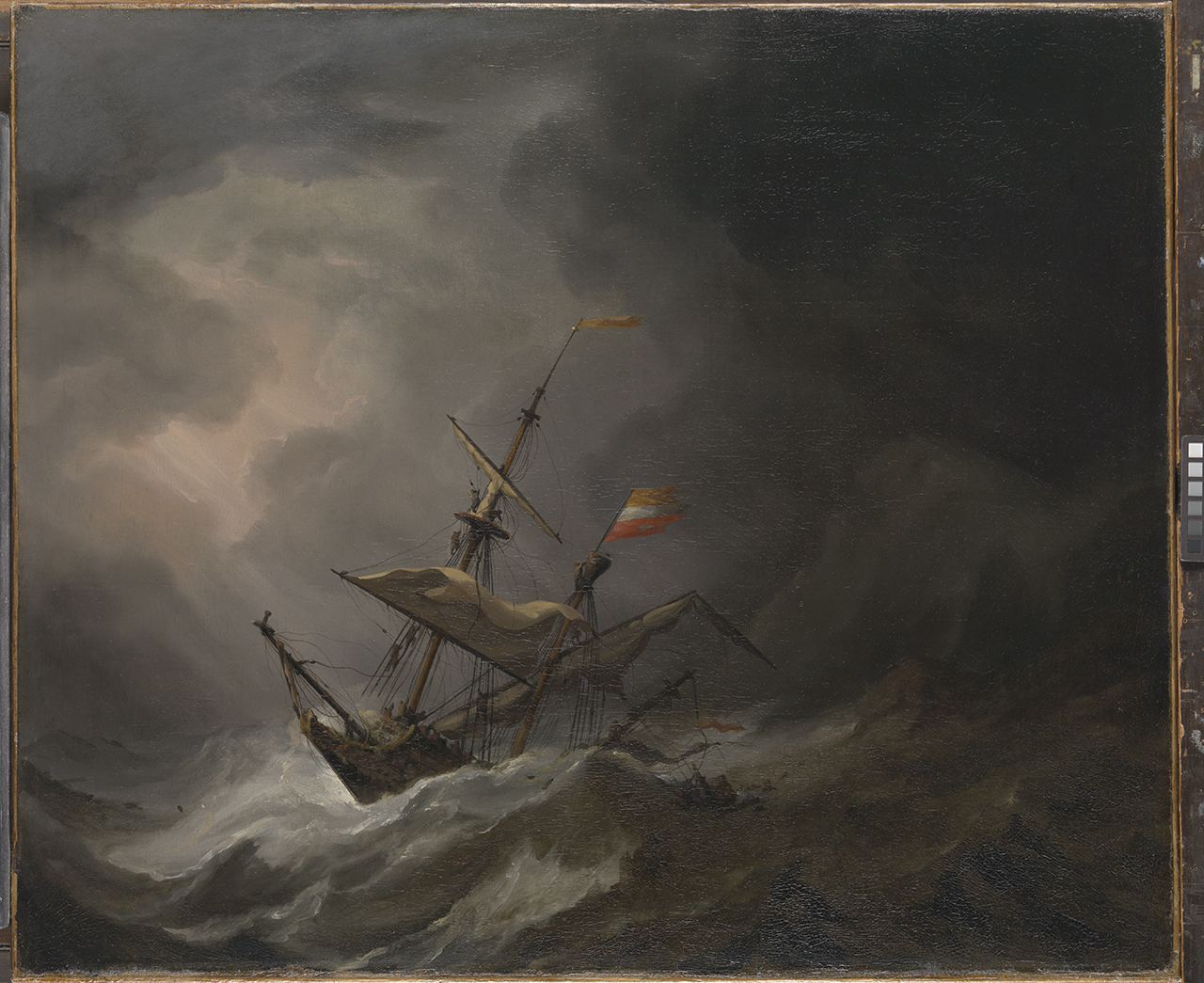 A Mediterranean Brigantine Drifting Onto a Rocky Coast in a Storm

In the centre of the picture is a brigantine or similar Mediterranean type of ship drifting stern-first on to the rocks. Viewed from before the port beam she is sinking and at an angle in the waves. The end of the lateen mainsail is shown at an angle where it has broken off. A man can be seen reaching the head of the mainmast, which bears a tattered striped flag. The artist has concentrated on the plight of those on the ship and sailors are visible both on the deck and climbing the rigging. One figure can be seen standing on the foretop with his arms outstretched.

On the left brilliant light shines through a break in the dark clouds and lights up the sea around the vessel as well as picking up highlights on the masts and sails. Men are swimming from the stern towards a small rock in he middle distance on the right. A high coastline cast in shadow can just be seen beyond. The vessel is an unusual type for van de Velde to have painted and may be a result of his visit to the Mediterranean in 1694. The interpretation of the subject of this painting is thought to be based on a pen-and-ink drawing in the Philadelphia Museum of Art, with an inscription that may imply the shipwreck of St Paul on Malta.

The artist was the younger son of Willem van de Velde the Elder. Born in Leiden, he studied under Simon de Vlieger in Weesp and in 1652 moved back to Amsterdam. He worked in his father's studio and developed the skill of carefully drawing ships in tranquil settings. He changed his subject matter, however, when he came with his father to England in 1672-73, by a greater concentration on royal yachts, men-of-war and storm scenes. From this time painting sea battles for Charles II and his brother (and Lord High Admiral) James, Duke of York, and other patrons, became a priority. Unlike his father's works, however, they were not usually eyewitness accounts. After his father's death in 1693 his continuing role as an official marine painter obliged him to be more frequently present at significant maritime events.
Back to Search Results
Buy a print License an image
Share:
Link copied to your clipboard!