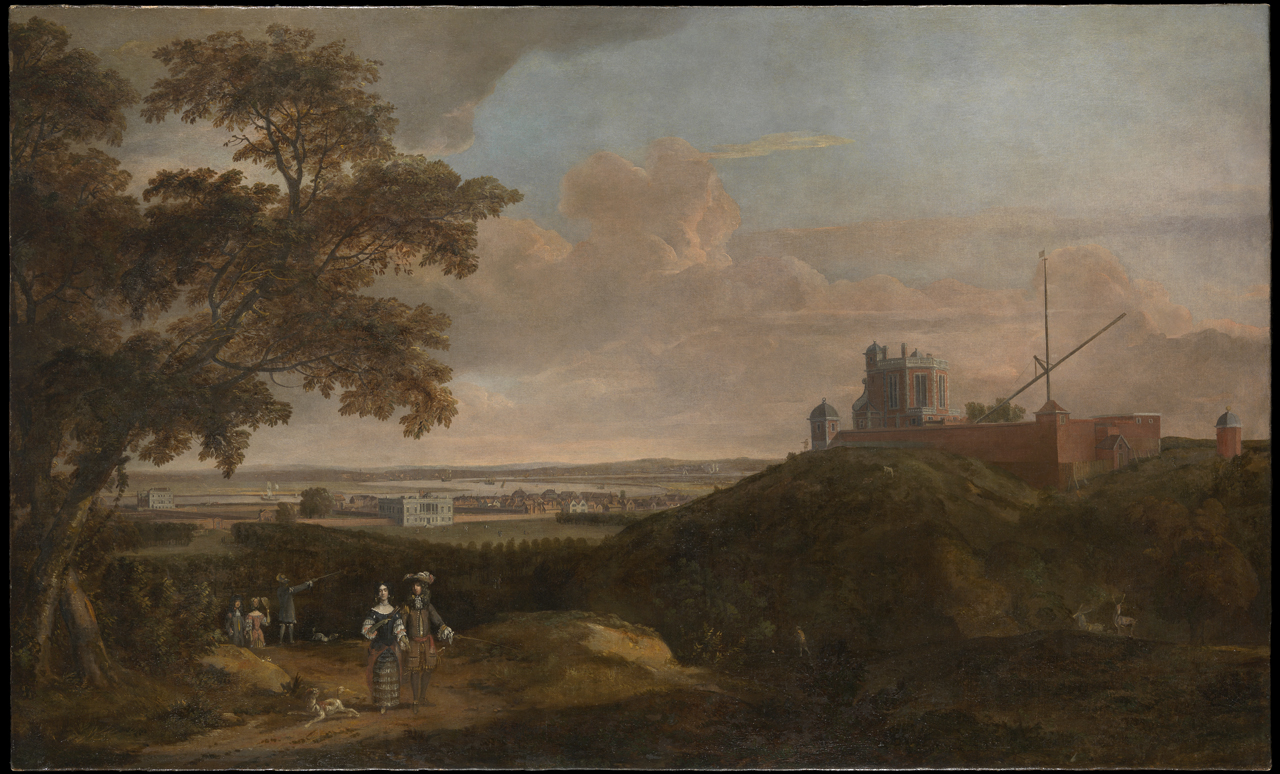 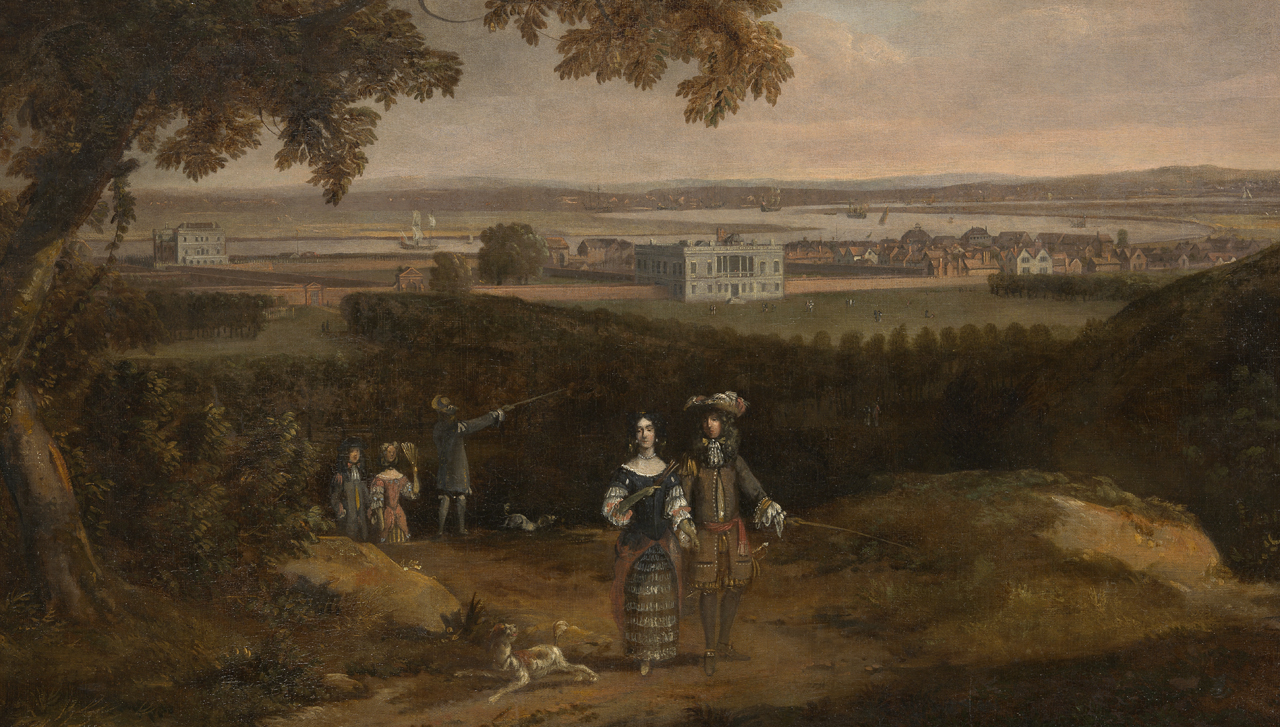 The Royal Observatory from Crooms Hill, about 1696

(Updated November 2015) A scene showing the Royal Observatory at Greenwich on the right and the Queen's House and Thames riverfront buildings of East Greenwich in the distance, left and centre. The main building of the newly constructed Observatory (1675-76), rapidly gained the name Flamsteed's or Flamsteed House from its first incumbent, the first Astronomer Royal, John Flamsteed. From 1676 until his death in 1719 it was his home and workplace in the task of charting the skies to 'find out the so-much desired longitude of places' and to improve navigation and astronomy - all very necessary to the rising sea-trading power that Britain was then becoming. Greenwich was selected as the site for the Observatory following a recommendation by the architect responsible for its design, Christopher Wren. Significantly it was on a royal site, on high ground free of smoke from London. It was purpose-built with tall windows and sufficient space to enable the long telescopes and pendulum clocks required to be housed and used. In fact, and for technical reasons, most of Flamsteed's and his successors' observational work was done in outbuildings, with Flamsteed House itself serving largely (in Wren's later words) 'for the observator's habitation, and a little for pomp' in receiving distinguished visitors. The Observatory was therefore both functional and aesthetic.

This was a fertile period in English science when enormous advances were being made. There was an emphasis on the precise observation of phenomena and on conducting experiments. Charles II had already given prestige to scientific endeavour by transforming the Philosophical Society into the Royal Society by charter of 1662. His appointment of Flamsteed, and foundation of the Observatory - including allocation of the site and provision of £500 for its construction - were further examples of his intelligent patronage.

The painting shows John Flamsteed's walled open garden to the rear of the Observatory. Prominently visible is the 80-foot mast holding his 60-foot refracting telescope. Deer - introduced at Greenwich by Henry VIII in 1515 - are shown grazing below to indicate that this is a royal park. A richly dressed couple saunter in the foreground, facing towards the viewer, with a dog. Another couple also walk on the path below and a man stands pointing towards the Observatory. In the distance the walled Greenwich to Woolwich road marks the bottom end of the Park, with the roadway still running underneath the central bridges of Inigo Jones's Queen's House (1616-c.1638). Beyond, to the left of the House is the open former garden of the Tudor Palace of Greenwich and beyond a second wall the vacant site of the demolished Palace itself. Charles II's unfinished wing (1664-69) of what is now the King Charles Court of the Old Royal Naval College is just visible on the extreme left. Beyond the road to the right of the House is the Greenwich Palace tiltyard, at about this time being used for gunpowder and firework experiments by the Board of Ordnance. Brickwork just projecting above the Queen's House roof is the top of the so-called 'turret', the ruins of the remaining Tudor tower (one of two) on the west side of the tiltyard, which was only demolished in the late 1690s. An isolated building unclearly shown at the base of the Greenwich peninsula (Greenwich Marsh), where it meets the edge of the hill, is probably the Greenwich powder magazine built in 1694. The River Thames with shipping lies beyond. A tree dominates the foreground on the left and the land drops sharply away down the hill towards the river. Ships under construction, and lying in the river, can just be seen at Blackwall yard on the north bank opposite Greenwich Marsh. One vessel, shown in black to the left, and apparently moored on dry land, may be lying in the Blackwall basin excavated in 1651.

The painting is practically contemporary with Samuel Pepys's last known visit to Greenwich in summer 1697, when he dined with Flamsteed and his wife at the Observatory, thanking him in a letter of 5 July for his 'Crowd of Favours, both Intellectual and Culinary, at my late Visit...heighten'd, by the Conversacion and Kindness of your Excellent Lady'.
Back to Search Results
Buy a print License an image
Share:
Link copied to your clipboard!