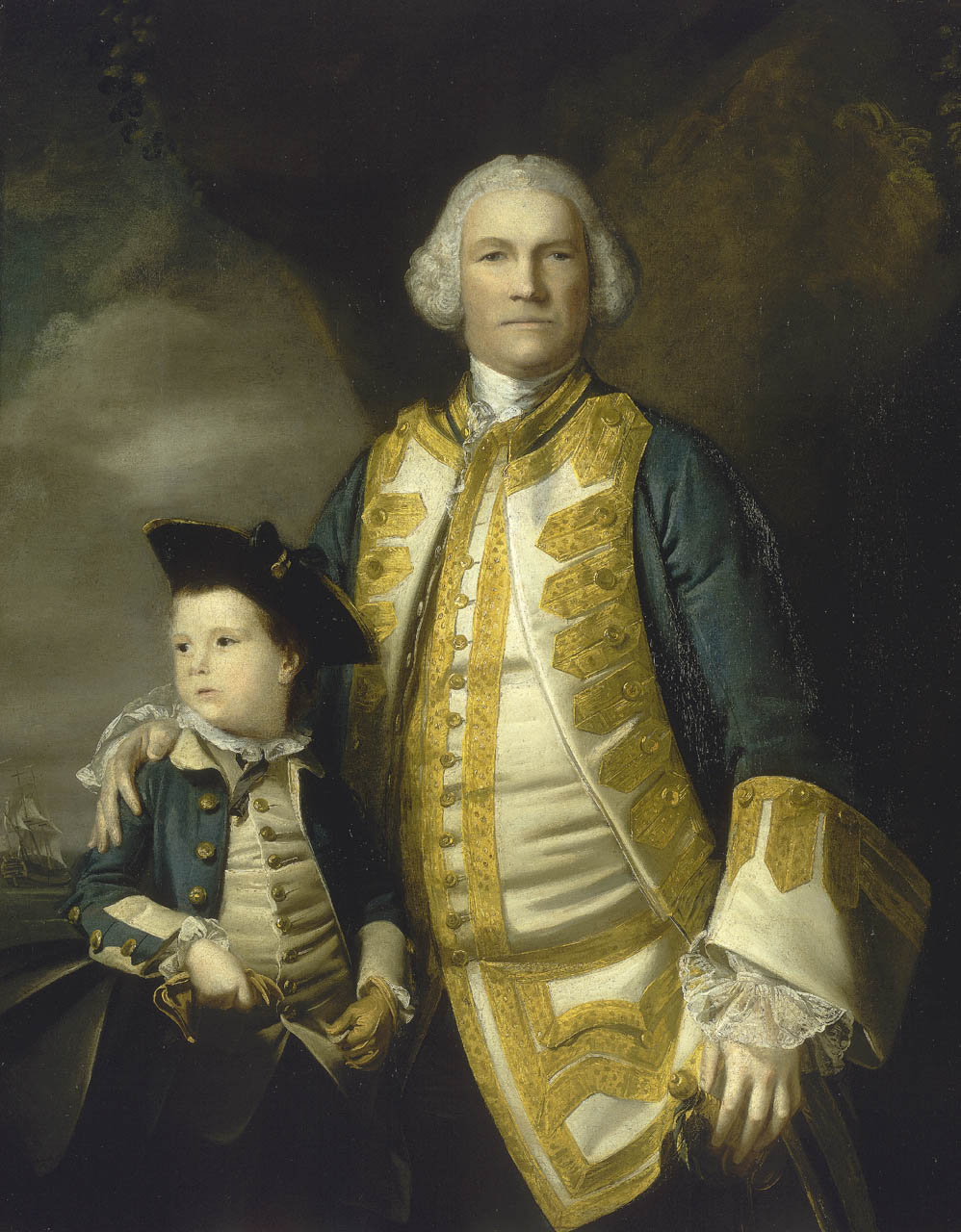 A three-quarter-length portrait, full face, wearing flag officer's undress uniform of 1748–67 and a tie wig. His right hand is round the shoulders of his young son, Francis (1752–1820), who leans on an anchor fluke facing to the left. Facing forwards and looking to the left, the boy wears a midshipman's uniform with a three-cornered hat and leather gloves.

The portrait was started after May 1755 and was initially intended to be head and shoulders of Holburne alone. In 1757 the canvas was extended on the left and bottom to include the child, who was Holburne’s only son (though he had both an elder and younger daughter, both of whom survived to marry well). The portrait was thus fitted around Holburne's naval commitments, since in 1755 he went with reinforcements to America, with Boscawen and Loudon, and two years later sat on Byng's court-martial. He was for eight years Commander-in-Chief at Portsmouth, was made Rear-Admiral of England in 1770 and was briefly Governor of Greenwich Hospital in 1771. At the same time he was MP for Plymouth , 1768-71.

The Holburne family connections are of some significance. The Admiral was second son of Sir James Holburne of Menstrie, created a Baronet of Nova Scotia in 1706: his elder brother, James, (d. 1758) became second baronet. The latter’s eldest son, also James, became a Royal Naval lieutenant in 1745 but was killed commanding the sloop ‘Dispatch’ in 1756. It was therefore the second son, Alexander, who became third baronet in 1758, a year after he too was commissioned as a naval lieutenant. He rose to captain in 1763 and it was on his death in January 1772 that his cousin Francis (the Admiral’s son) became fourth baronet at the age of nineteen. In the present portrait, Francis is at shown aged six at most, which suggests his midshipman’s uniform is either one made for him by his proud father, or simply painted in by Reynolds, since he would then have been too young to be at sea in this role. Whether he later went afloat professionally in the Navy is not yet known, but it could only have been briefly and he was never commissioned. He and his two sisters were the children of his father’s marriage of 1749, at Barbados, to Mrs Frances Lascelles (née Ball) the daughter of a plantation owner. She had been left a widow in 1747 by the death of her first husband, Edward Lascelles (b. 1702), half-brother and business partner of Henry Lascelles (1690-1753), who generated a fortune from West Indian interests, shipping and in other Government contracting. Edward succeeded Henry as Collector of Customs at Barbados in 1734 and was a member of the Barbados Council at his death. He and Frances had six children of whom only three survived, becoming the Admiral’s step-children. In 1795, on the death of Henry Lascelles’ son and principal heir Edwin (b.1713) the eldest of these, also Edward, inherited huge wealth including Harewood House, Yorks. In 1812 he became first Earl of Harewood.

As fourth baronet, Sir Francis Holburne married in 1786 and had two sons and three daughters. The elder son, also Francis, became an army officer and died of wounds when serving under Wellington at Bayonne in 1814, so again it was the younger boy Thomas William (usually called Sir William, 1793–1874) who in 1820 became fifth baronet, inheriting by then considerable family property, though not on the scale of his Lascelles cousins. Sir William lived in Bath and was a very notable collector but he did not marry and on his death his estate passed to his sisters. In 1882, the youngest of these, Mary, left the family house and collection to the City of Bath as the origins of what is now the Holburne Museum. This portrait was until then in the house, but was bequeathed by Sir William to the Naval Gallery at Greenwich Hospital consequent to the death of his sisters and was delivered in 1883.

In 1740 Reynolds was apprenticed to the portrait painter Thomas Hudson (1701-90) and after early work in his native Devon travelled to Italy in 1749. In 1753 he set up in London and rapidly began to make a name as portrait painter, profoundly influenced by his time in Italy. He became the first President of the Royal Academy in 1768 and was knighted in 1769. He was the most influential figure of the century in elevating British painting and portraiture. Reynolds borrowed poses from the old masters and by 1759 he had created social portraits in a new style that were deemed fresh and modern, and yet dignified the status of the sitter.
Back to Search Results
Buy a print License an image
Share:
Link copied to your clipboard!