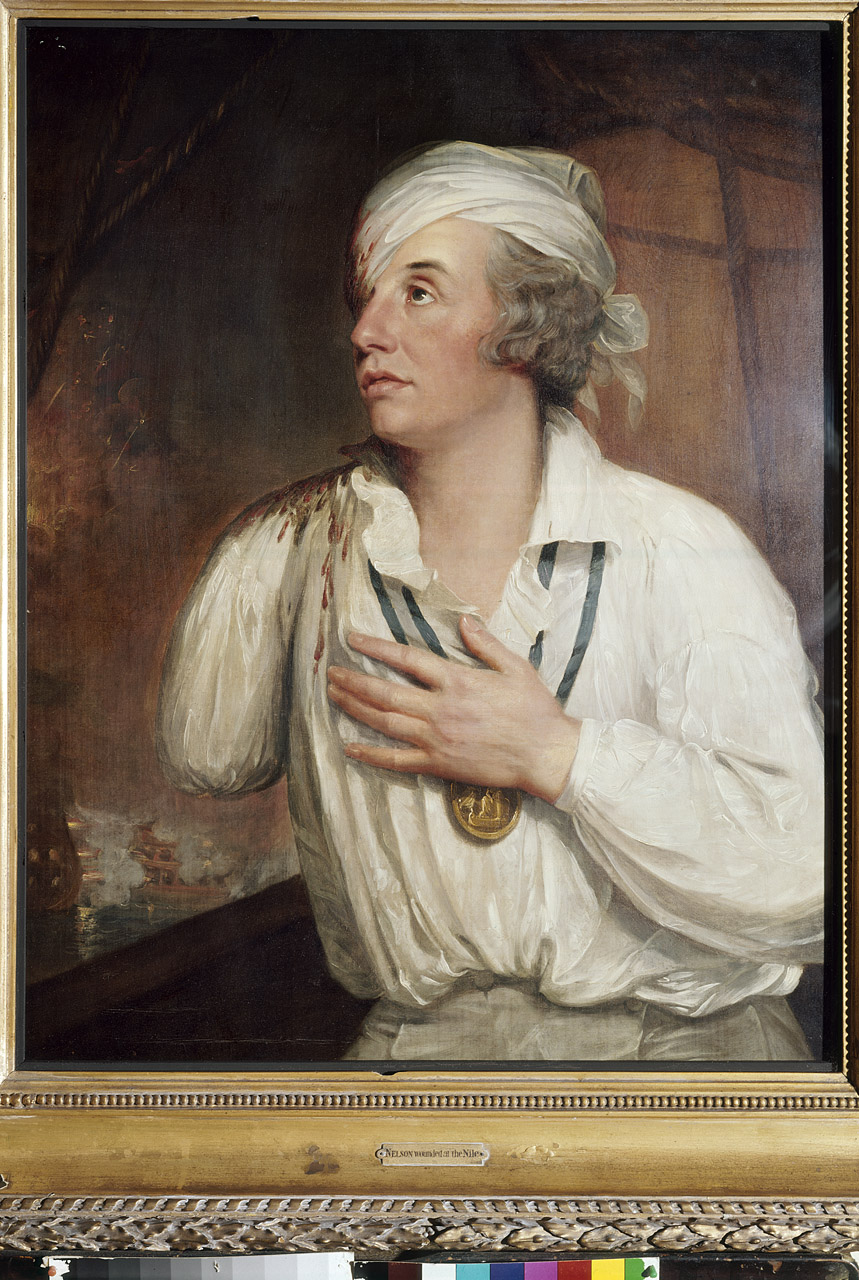 A half-length portrait to left in a white bloodstained shirt open at the neck. He wears the St Vincent medal on a white and blue ribbon around his neck. His left hand is across his chest. He wears a bloodstained white bandage around his head and there is blood on his right shoulder. His hair is brown tinged with white. In the left background is the Battle of the Nile with rigging on the right and the rail of a ship implied on the left. The painting represents the moment when the French flagship 'L'Orient' blew up. Nelson had received a severe wound in the head from a piece of langridge, rough metal fired as shot. The surgeons were dressing this below when, hearing that a ship was on fire, he ran back up on deck.

The portrait is believed to have been owned by Nelson. This significantly means that it is probably based on an accurate account of his battered appearance at this period. He had been severely injured above the eye, bandaged, racked with a headache and pain, and probably concussed. Nelson stands among the rigging with a battle raging in the background. The interpretation is unusual and although theatrical it is also surprisingly intimate, showing the sitter with a shirt open at the neck and tucked into his waistband. His hand rests on his heart in a gesture more akin to a love portrait and, despite the grey hair, he appears youthful with the trappings of uniform removed. It differs from other portraits of the same time and this suggests that it may have been made for a more intimate purpose, perhaps as a love token for Emma, Lady Hamilton, with whom Nelson began a passionate affair shortly after the Nile. The curious gesture may indicate that it was in response to one of Emma's posed 'attitudes'.

The painting has been tentatively attributed to Guy Head, who was working in Naples at the time that Nelson was there. He made a living copying Old Masters and painting portraits of visiting English and prominent residents such as Lady Hamilton. Head was certainly there when Nelson arrived from the Battle of the Nile in 1798 and undoubtedly made sketches of the bandaged admiral. In 1798-99, King Ferdinand of Naples commissioned Head to paint a full-length portrait of Nelson in rear-admiral's uniform, standing with a midshipman on the deck of his Nile flagship, 'Vanguard'. This is now in the National Portrait Gallery, London
Back to Search Results
Buy a print License an image
Share:
Link copied to your clipboard!