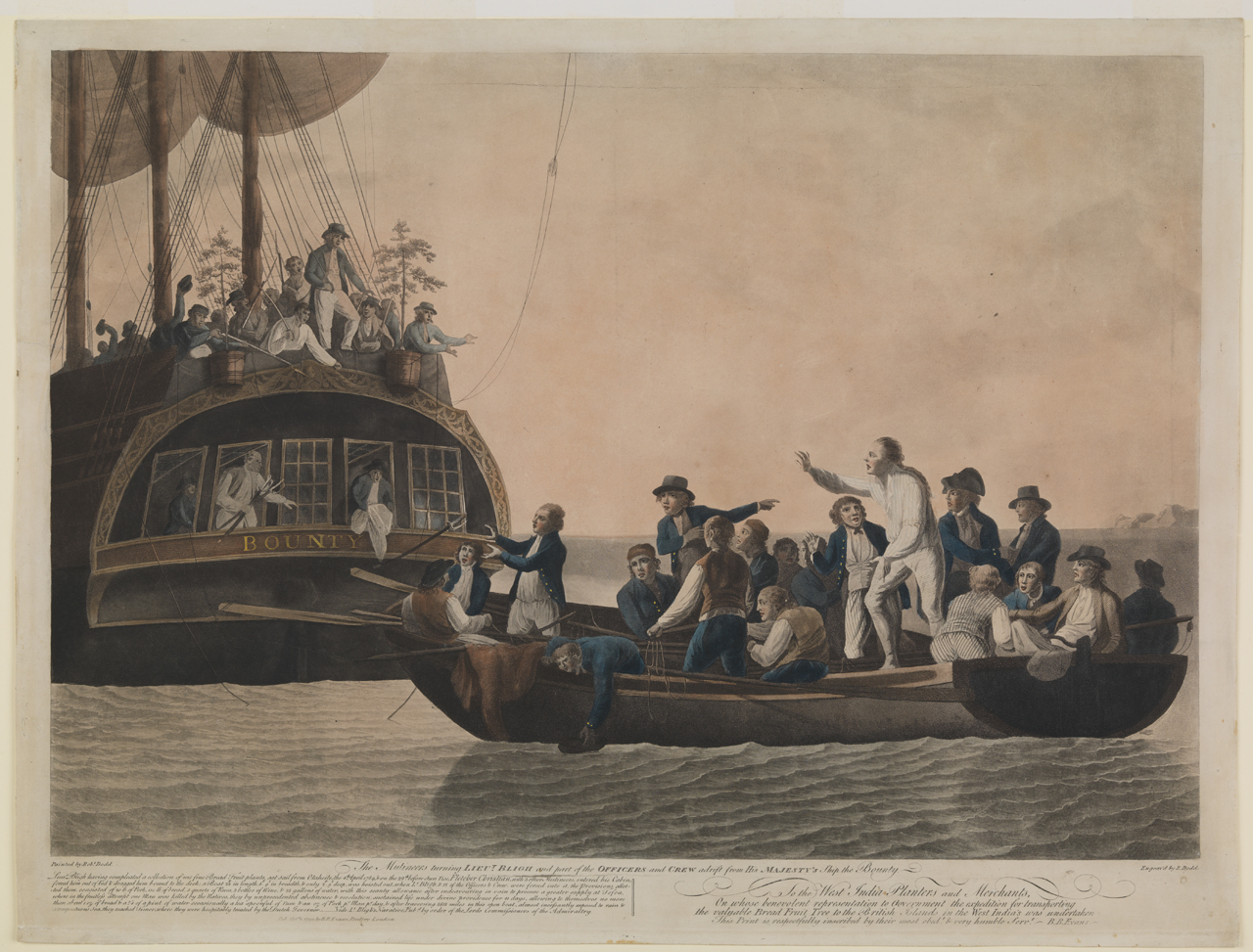 HM sloop 'Bounty' was a small West Indiaman of 250 tons, previously called 'Bethia', and purchased by the Admiralty on the Thames for the voyage to the Pacific to obtain breadfruit for Britain's slave colonies in the Carribean. She was the smallest of several candidates for a voyage which the Admiralty only agreed to under pressure from the Royal Society and the king, and she was not chosen by Bligh (who was at sea and only appointed to command her on return) but by Sir Joseph Banks and the gardener who sailed with her to advise on plant collection. They considered her best suited to purpose: Bligh would probably not have done so, partly because she was small for a single-vessel expedition in practical terms but also because, on that ground, she was rated only as a sloop in which Bligh- then a lieutenant- was the only commissioned officer. Despite Bligh's requests for another lieutenant and a detachment of Marines to support his authority the Admiralty refused both - though both had been granted to Cook on is first Pacific voyage when he also was only a lieutenant - but in the larger 'Endeavour'. This was the start of the practical problems, none of Bligh's fault, which eventually contributed - with his undoubtedly mercurial temper - to the famous mutiny. It came to him as a shock, not least in being led by his favoured acting-lieutenant Fletcher Christian, who was officially a master's mate and who had sailed with him before. Christian appears to have been fairly volatile as well and, with various others, was certainly affected by the disorientating effects of a long stay in Tahiti - where he and they formed relationships with local women - and the consequent tensions between local conditions and naval discipline, especially on leaving. Shortly afterwards a small incident in which Bligh exploded over the alleged pilfering of coconuts brought on board as provisions caused Christian and others to crack. The mutiny was very rapidly arranged and Bligh and eighteen followers were cast adrift in the ship's launch without charts, very limited instrumentation and only meagre rations. They were given cutlasses but no guns. One man was killed by hostile islanders when they briefly landed on Tofoa but, thanks to Bligh's skills as a navigator and seaman, he and all the others reached the Dutch colony of Coupang on Timor safely on 14 June 1789. The journey in the heavily overloaded launch took forty-one days and covered over 3600 nautical miles: it remains the greatest open-boat survival voyage ever recorded. By comparison Shackleton's famous 800-mile Antarctic passage from Elephant Island to South Georgia in 1916 in a slightly larger boat was no less a feat of seamanship but was intentional, not overloaded, well planned, well equipped in navigational terms and area knowledge, and less than a quarter of the distance. After the incident on Tofoa, Bligh considered it too dangerous to try landing on other islands and though they passed safely through the warlike Fiji group (where ritual cannibalsim was active), their next landfall was on the north-east Australian coast.
Back to Search Results
Buy a print License an image
Share:
Link copied to your clipboard!