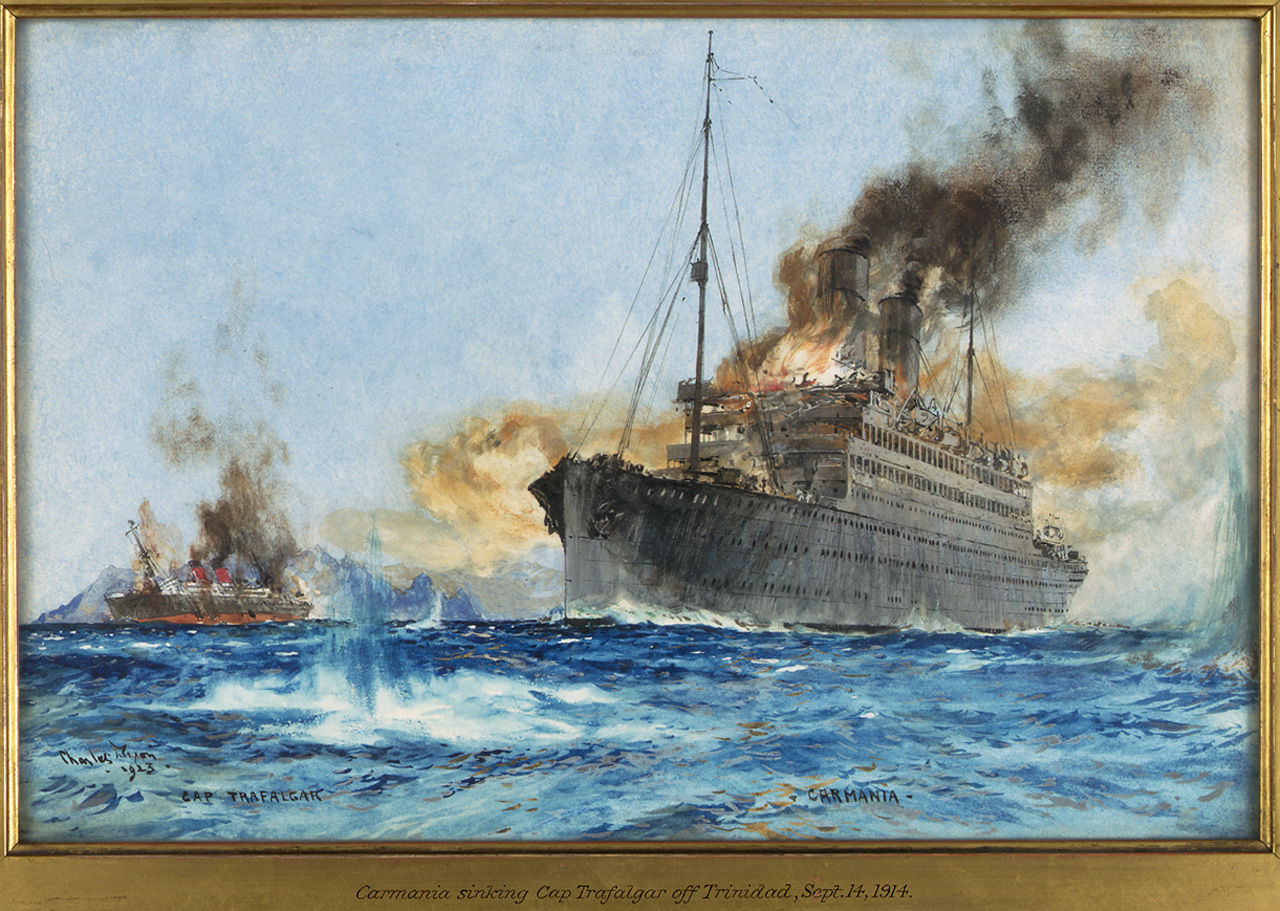 'Carmania' sinking the 'Cap Trafalgar' off Trinidade Island in the South Atlantic, 14 September 1914

Signed and dated by the artist, lower left, and with the ships' names also inscribed in the sea below them. The British 'Carmania', was one of the first transatlantic liners to be fitted with turbines (though preceded by the Allen Line 'Victorian', which began her maiden voyage in March 1905, while 'Carmania's' only started in December). At the beginning of the First World War, she was taken over by the Royal Navy as an armed merchant cruiser and painted grey overall, as shown here on the right. By contrast, the German Hamburg-South America Line's 'Cap Trafalgar' was completed in March 1914 as a three-funnelled passenger liner and, as part of her disguise when she too was converted to a German armed merchant cruiser in August, her forward funnel was removed and the remaining two were repainted red with black tops to resemble the 'Carmania' in her pre-war livery. By a fatal irony, the two then met at about midday on 14 September 1914 off Trinidade Island, about 740 miles east of Rio de Janeiro, Brazil. In a gun battle fought at ranges from 7000 yards down to 100 yards, the 'Cap Trafalgar' (on the left here) sank at about 13.50. Though 'Carmania' survived, she was badly damaged, receiving 79 hits: her bridge was wrecked and she suffered extensive fire damage but only nine crew were killed. This watercolour incorrectly shows the position of her boats, which were slung under davits mounted externally at bridge deck level. The title inscribed on the frame ('Carmania sinking Cap Trafalgar off Trinidad, Sept. 14 1914.') is also misleading in mistaking Trinidad (West Indies) for Trinidade Island.

The son of the genre painter Alfred Dixon, Charles Dixon developed a taste for historical naval subjects. He worked as an illustrator for the 'Illustrated London News', 'Sphere' and the 'Graphic', and also painted Thames subjects in watercolour, rather in the manner of W. L. Wyllie.
Back to Search Results
Buy a print License an image
Share:
Link copied to your clipboard!