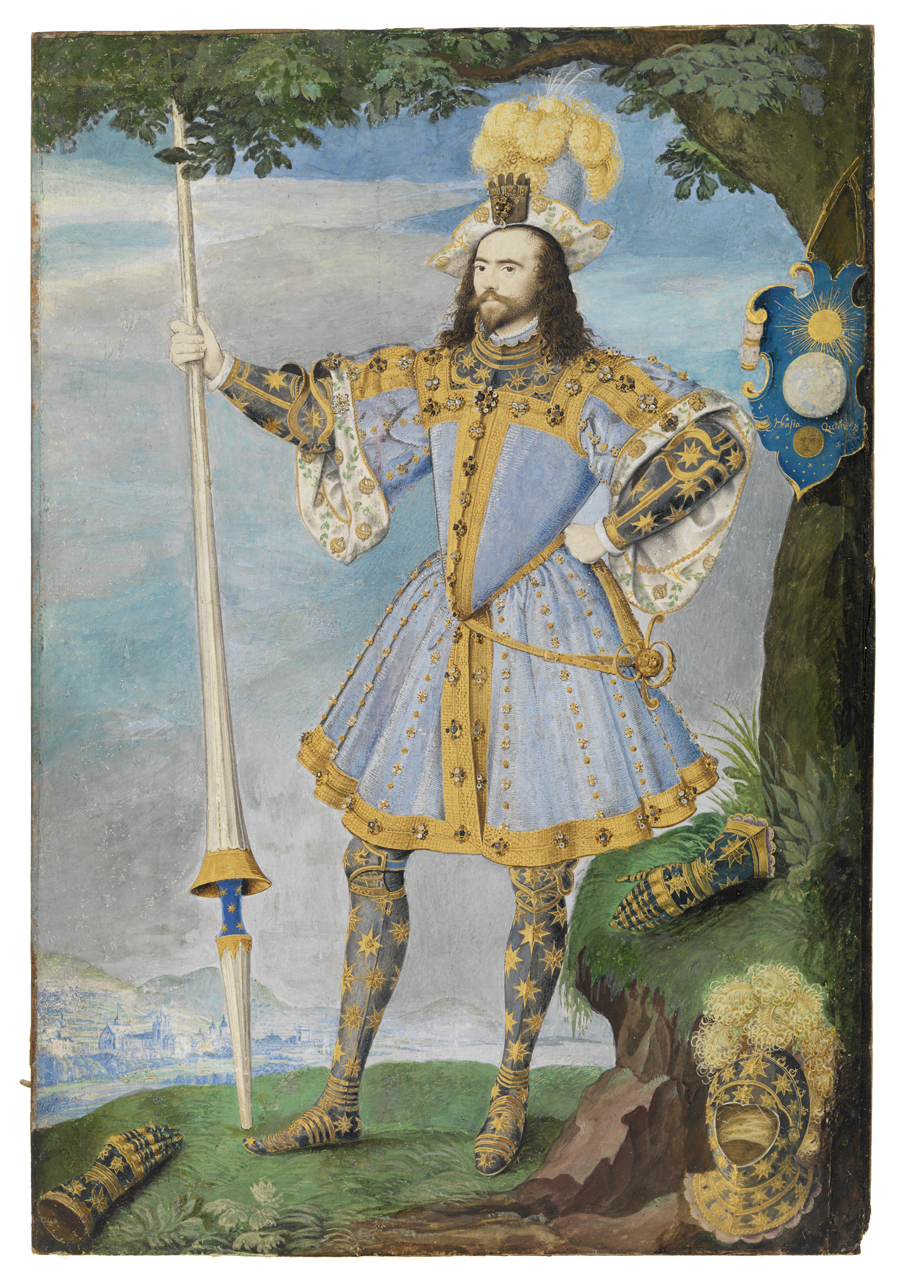 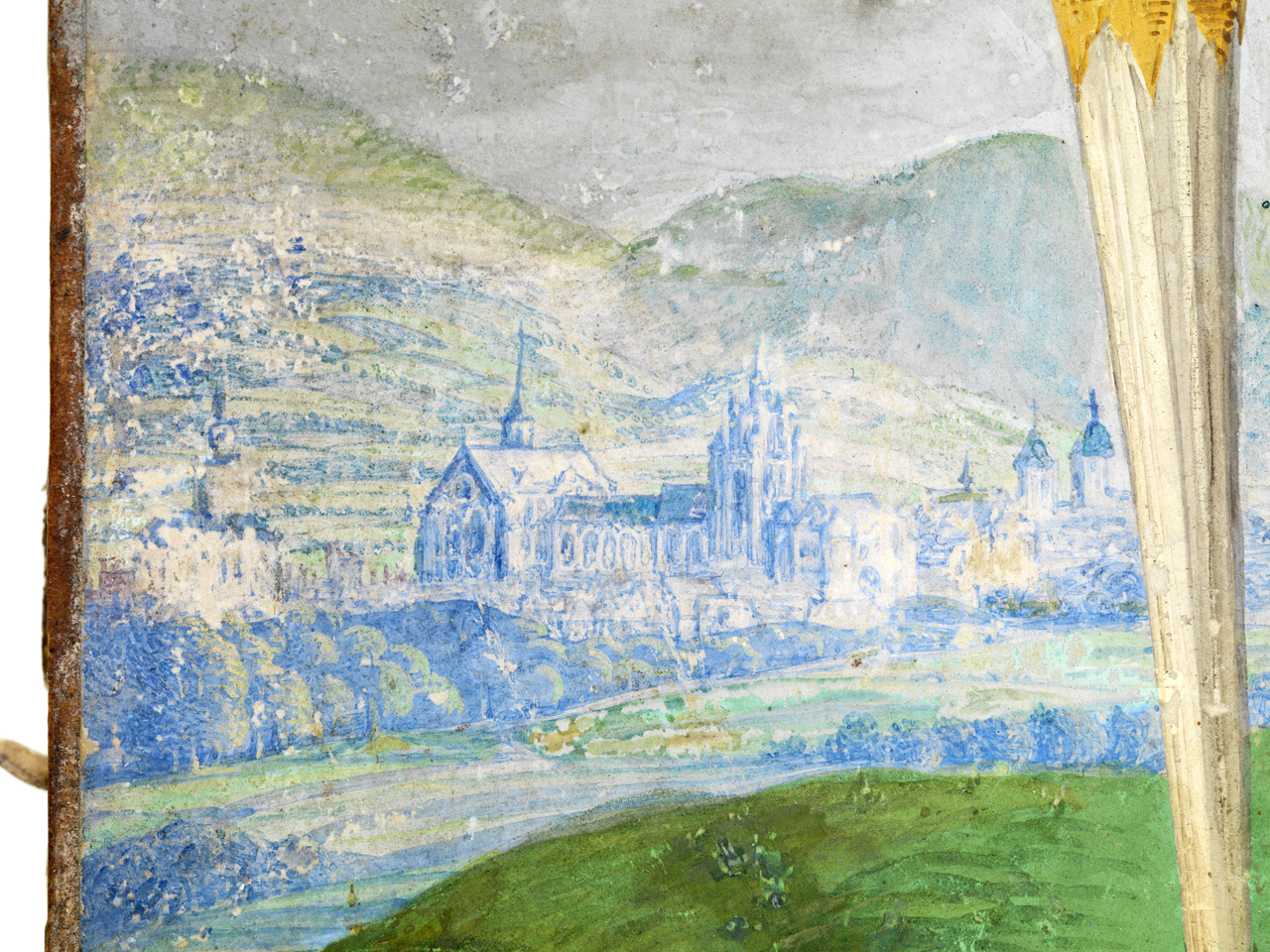 (Updated, March 2019) A full-length miniature of George Clifford, 3rd Earl of Cumberland, in watercolour on thin vellum laid on a fruitwood panel. He stands under an oak tree that grows from a rock to the right, turned slightly to viewer's left, with his left arm akimbo on his hip and his right held out supporting a tilting lance. He has brown eyes, long loose brown hair, moustache and a full beard trimmed to a point, and is in tournament armour of which the right gauntlet lies thrown down in front of him, as in challenge. The ostrich-plumed helmet and left gauntlet lie at the base of the tree on which hangs his related parade shield. The armour is of blued steel engraved with a gilded star decoration, the braiding of the surcoat also being executed in gold leaf. The armour was undoubtedly made for Clifford in Henry VIII's armoury at Greenwich Palace, and the miniature is generally thought to commemorate his assumption in 1590 of the role of Queen Elizabeth's champion (in succession to Sir Henry Lee) and his first appearance as such in that year's Accession Day tilts at Whitehall (17 November). As her new champion he was also their organizer and he appeared both then and in later years in the guise of 'Knight of Pendragon Castle' . Her glove, with a crown visible on the embroidered fingers, is pinned to his plumed bonnet by a rose jewel with a pendant pearl.

On the basis of evidence he received this mark of the Queen's favour in or about 1586, Kennedy in 1917 suggested that the miniature might be a little earlier than 1590, but not after 1592 when he became a Knight of the Garter, since no insignia is shown. The blackness of some of the jewels (probably mainly diamonds) is likely to be from tarnish of their original silver leaf highlights. The hat shares the design of the blue surcoat, bearing armillary spheres (for heavenly wisdom), Tudor roses (some jewelled) and leaves, and gold caducei (staffs encircled by snakes, symbolizing hidden knowledge, the emblem of Hermes/Mercury, messenger of the gods). He also wears a sword over the surcoat, of which the hilt only is visible below his left elbow. The probably pasteboard shield, for display at the tilts and then hung in the Whitehall 'Shield Gallery', has a blue field dotted with gold stars, with an impresa (device) of a gold sunburst above a world globe, and a gold Moon below. Between the last two is the motto 'Hasta Quando' . This may be Latin ('a lance at any time'), implying Clifford's unconditional loyalty to the Queen, under whatever aspect of her favour, though with his 'sun' clearly ascendant in 1590. Another interpretation suggested in the related catalogue entry in the NPG Hilliard and Isaac Oliver exhibition (2019) is that it is the Spanish motto 'hasta quan' ('until when') with the emblem interpreted as an eclipse, indicating loyalty until such a distant or rare event: in either case, the implication is similar. Clifford's 'star' armour does not survive, but a slightly earlier and equally elaborate Greenwich tournament suit of his is now in the Metropolitan Museum, New York. In 1590 Clifford entered the lists on a car in the form of a castle, surrounded by figures from Arthurian romance. The left background here also shows such a mythical castle or palace, set in a fertile coastal landscape rising to distant hills. This idealized setting befitting his assumed Arthurian role is either imaginary or copied from another source. Clifford inherited large estates in Westmoreland and Cumberland and was the leading Northern earl at Elizabeth's court. He was a gambler, privateer, mathematician and navigator, and commanded the 'Elizabeth Bonaventure' in the Armada campaign of 1588. He eventally exhausted his wealth by extravagance and in financing eventful but generally unprofitable anti-Spanish privateering expeditions. This famous miniature is the largest by Hilliard to survive, though he painted others of the same rectangular format. The composition is based on a Netherlandish engraving of a pike bearer by Hendrick Goltzius, published in 1582.

This miniature was formerly in the collection of the Duke of Buccleuch, from whom Sir James Caird purchased it for the Museum in 1941. It was then in a close-fitting rectangular gilt metal frame, with a suspension ring above and a name scroll below. This is shown in the 1917 'Studio' magazine special issue on the Buccleuch miniatures (essay by H. A. Kennedy, ed. Charles Holme; plate xvii). In 1988 the Museum remounted it in a black wooden frame more appropriate to its period (for display in that year's 'Armada' exhibition) though the other has been retained.
Back to Search Results
Buy a print License an image
Share:
Link copied to your clipboard!