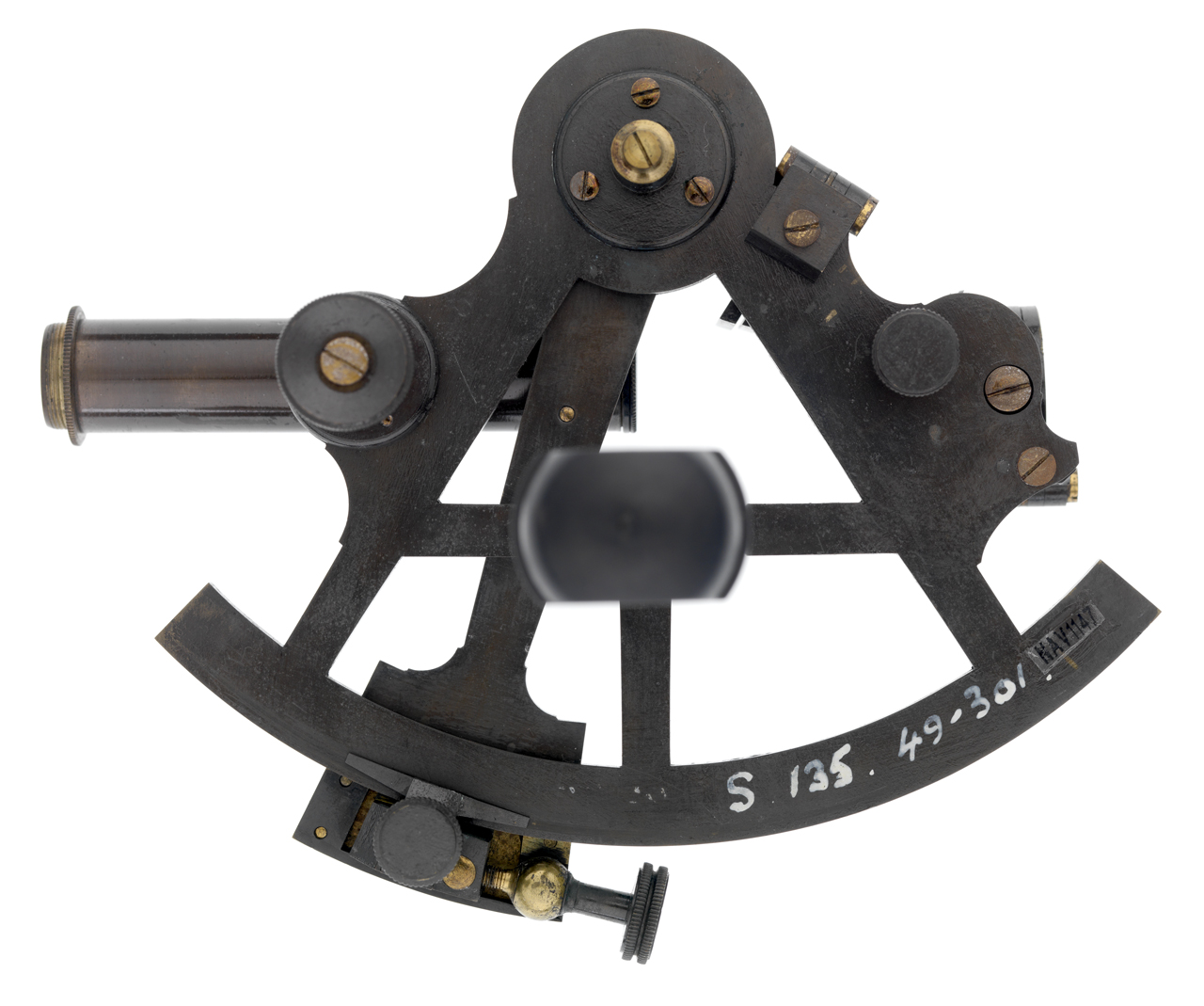 The quintant has an anodized brass alloy frame and a hinged wooden handle with a hole for securing a carrying string. The tangent screw and clamping screw are positioned on the back of the index arm. The instrument has two shades in green and grey, and two horizon shades in green and grey. Index-glass adjustment is made by a screw and on the horizon glass by screws and a milled knob.

Attached to the quintant is a single lens magnifier on a 50mm swivelling arm. There is also a threaded telescope bracket with perpendicular adjustment made by a rising-piece and a milled knob. The telescope is 106 mm in length with an inverted image. A second telescope is 70 mm long with an erect image. Accompanying the quintant is a sight-tube which is 70 mm in length, a mauve shaded eyepiece, and a magnifying glass, which is missing.

The instrument has a polished brass limb with an inlaid silver scale from -5° to 165° by 20 arcminutes, measuring to 144°. The quintant has a silver vernier measuring to 30 arcseconds, with zero at the right.

The quintant is contained in a square fitted wooden box within a leather carrying case marked ‘Admiralty HO [broad arrow] D.86’. The strap for this case is missing. A paper label on the lid of the box with a handwritten inscription reads, ‘This Sextant was used by me during the travelling Expeditions in the Arctic Regions in the years 1852, 53, 54 and was afterwards presented to me by the Hydrographer as a memento of the Service G.H.R.’.

The initials ‘HO’ and the broad arrow indicate this was originally an official-issue Royal Navy Hydrographic Office instrument. It was used by Captain (later Admiral Sir) George Henry Richards RN, KCB, FRS, (1820-96) when commander of HMS ‘Assistance’ in Belcher’s search expedition for Sir John Franklin, 1852-54, and subsequently presented to him by the Hydrographer of the Navy.

‘D.86’ was the Hydrographic Office serial numbering adopted in February 1828, in which D was the letter given to sextants.
Back to Search Results
Buy a print License an image
Share:
Link copied to your clipboard!