Skip to main content
You are here:
Home Discover our stories and collections Museum blog Franklin's ship found! Was it where their crew said they left it?

Franklin's ship found! Was it where their crew said they left it? 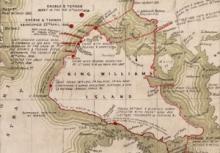 G285:4/18: Detail from Sketch of discoveries on the northern coast of America by Captain M'Clintock RN in search of Sir John Franklin

This year the Parks Canada team searched an area north-west of King William Island. We do not yet know the exact location of their amazing find but we wait with interest to see how far the ship has moved in the last 166 years. By Gillian Hutchinson, Curator, History of Cartography

Print
Sir John Franklin dying by his boat during the North-West Passage expedition of HMS 'Erebus' and 'Terror'
McClintock's expedition found the remains of Franklin's men where they fell...