Skip to main content
You are here:
Home Discover Explore by theme The strange things humans have left on the Moon

The story of how we got humans to the Moon is a well-documented one. But what about after we leave the lunar surface – what is left behind?

Why do astronauts leave things behind on the Moon?

There are many reasons objects have been left on the Moon.

Often it is to make room for Moon rocks to be taken back to Earth. This way the additional weight of the Moon rocks doesn’t impact upon the return flight.

Other times the reasons were more sentimental. Stepping onto the lunar surface is a hugely impressive feat of human endeavour, and the achievement has been marked by some of the things left on the Moon.

As Neil Armstrong and Edwin ‘Buzz’ Aldrin began their return journey to Earth, they disposed of anything they didn’t need from the lunar module. This included the tube that the US flag had been rolled up in, the TV camera they’d used to send footage back to Earth, and the tools they’d used to gather moon rock and dust. In doing this they created a ‘toss zone’, which lies to the west of the Apollo 11 landing site. It was important to lighten the load as they left the lunar surface.

In the Apollo missions that followed, many things were left on the Moon, adding up to an estimated 400,000 pounds of stuff.

What has been left behind on the Moon?

There are a total of 96 bags of human waste on the Moon. Scientists are keen to one day bring this back to Earth, to study how its time on the Moon has affected it, but for now it sits in bags upon the Moon’s surface.

Apollo 16 astronaut Charles Duke left a framed family photo on the Moon’s surface. On the back it reads:

"This is the family of astronaut Charlie Duke from planet Earth who landed on the moon on April 20, 1972."

Charles Duke was the youngest person to walk on the Moon, aged 36 in 1972. Exposure to radiation from the sun has most likely bleached the photo completely white by this point, but the sentiment stays the same. Best dad ever? He did take his kids to the Moon after all.

The bleached fate of Duke’s photo is a similar fate to that of the many flags left on the Moon.

Each lunar landing was marked by the planting of a flag, a tradition begun in 1969 by Armstrong and Aldrin during Apollo 11. Although deciding to plant a flag on the Moon’s surface during the Apollo 11 Moon landing was made at the last minute, it is one of the most iconic images from the Moon landing. All future Apollo missions would follow suit and plant their own flags. 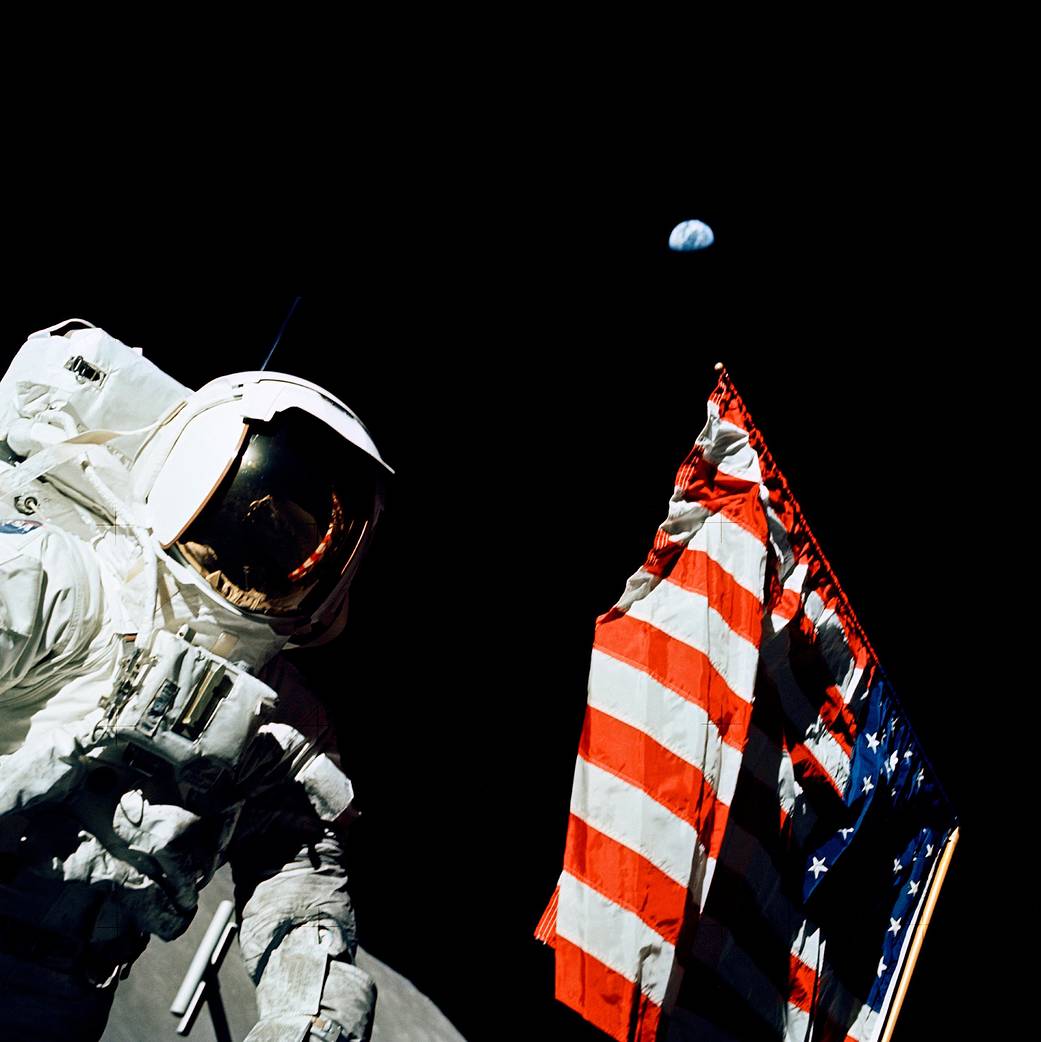 Gene Shoemaker was a US geologist, who studied terrestrial craters and discovered many comets and planets. When he died his ashes were transported to the Moon in a capsule on board the Lunar Prospector space probe. On the capsule, which had been specially designed to be taken to the moon, was a quote from Romeo and Juliet:

And, when he shall die,

Take him and cut him out in little stars,

And he will make the face of heaven so fine

That all the world will be in love with night,

And pay no worship to the garish sun.

Shoemaker is the only person to have their ashes flown to the Moon.

Titled Moon Museum, this small ceramic wafer measuring three quarters of an inch by half an inch was created by Forrest Myers.

The chip featured tiny art works from six artists including Claes Oldenburg, David Novros and Andy Warhol. Although NASA didn’t agree to transport the Moon Museum to the Moon, Myers told the New York Times that he gave it to an Apollo 12 engineer, who attached it to a leg of the lunar module.

As the landers are left on the Moon after the mission, this tiny piece of artwork is supposedly still on the Moon. However, there has been no confirmation from NASA that this was actually transported to the Moon, and there is no way of knowing for sure (without a return trip) that it’s residing on the lunar surface.

In the late 16th century Galileo Galilei is said to have dropped two objects of different masses from the Leaning Tower of Pisa. This experiment was designed to prove that the speed with which they fell was independent of their mass.

In 1971 Apollo 15 astronaut David Scott carried out a similar experiment on the Moon’s surface, crediting Galileo as being instrumental to the achievements of the Moon landings. Scott dropped a feather and a hammer at the same time, and the world watched as they fell at the same speed, and landed on the lunar surface at the same time.

The small sculpture of a human was commissioned by David Scott, mission commander of Apollo 15. Scott claimed that the work was intended to represent the fallen astronauts and Soviet cosmonauts, and it was placed face down, next to a plaque listing their names of the 14 people who had lost their lives during service. However, Van Hoeydonck claimed the sculpture was created with the intention of symbolising all of humankind, not just those who had died during the progress of space exploration.

As well as Fallen Astronaut, other astronauts have left behind memorials to their colleagues. Armstrong and Aldrin left behind an Apollo 1 mission patch to commemorate the astronauts who died in 1967 during a test of the command module.

Apollo 12 astronaut Alan Bean also left behind a golden olive branch to commemorate astronaut Clifton C Williams. Williams was meant to be the lunar module pilot on Apollo 12, but died in a plane crash while flying a NASA T-38 jet trainer due to a mechanical failure.

Moon buggies and other lunar equipment

From descent stages to Moon buggies, there’s plenty of technical equipment that has been left on the Moon.

Some of this equipment left on the Moon has even been used to commemorate the Moon landing. On the leg of the Apollo 11 descent stage is affixed a plaque, which reads; “Here men from the planet Earth first set foot upon the Moon. July 1969, A.D. We came in peace for all mankind."

Astronaut David Scott meanwhile left a bible behind on the dashboard of a Moon buggy.

Alan Shepard managed to get in a game of one-man intergalactic golf during his time on the Moon. He smuggled the head of a golf club on board the Apollo 14 mission, attached it to one of the tools, and hit two golf balls across the lunar surface.

Although a lot of the things left behind on the Moon may seem to be space junk, studying what has happened to them over time after their exposure to radiation and the conditions of the Moon’s surface may one day be able to tell us new things about space.

Shop
Metallic Moon Tote Bag
Carry the moon with you with this black cotton tote bag which has a metallic...

The missions before the Moon landing