Giovanni Riccioli was born in Italy in April 1598 and was ordained as a Jesuit priest in 1628. During his studies of philosophy and theology at the College of Palma, Riccioli’s interest in astronomy developed.

The Almagestum novum (New Almagest) was one of Riccioli’s most significant publications. In ten 'books', divided between two volumes (amounting to 1500 pages), it covered a wide range of astronomical study and was regarded by contemporary astronomers including John Flamsteed, the first Astronomer Royal, as a key text. The books covered celestial motion; study of the Earth, Sun and Moon; lunar and solar eclipses; the motion of the planets; fixed stars; and the structure of the universe.

With such a diverse range of topics covered, this piece will concentrate on just one aspect: book four of Almagestum novum, which is devoted to study of the Moon. Here, Riccioli worked in collaboration with fellow Jesuit Francesco Maria Grimaldi, who drew maps of the satellite.

Riccioli and Grimaldi’s maps were not the first of the Moon. In 1645 Michael Van Langren published what is acknowledged as the first map of the Moon, introducing a scheme of names for its features, setting it apart from earlier unlabelled drawings of the Moon. Two years later, in 1647, Johannes Hevelius published maps of the Moon in his work Selenographia. 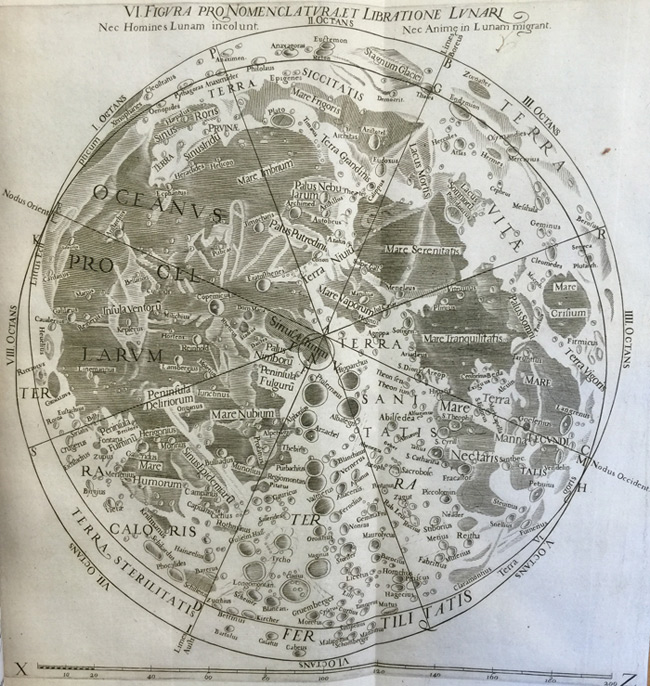 With each new revision of lunar maps, new nomenclature for the features came into use, sometimes competing against each other. Of the 325 names that Van Langren used in 1645, about 168 are still in use today. Hevelius was less fortunate, with ten of his names still in use on modern maps. Only four of these are still attached to the original feature Hevelius intended! Naming conventions often depended on the leading figures of the time who were to be honoured with the names of lunar features, but this could be heavily influenced by national and religious backgrounds.

Riccioli appeared to favour the naming conventions of Van Langren, who had already introduced names based on the terrestrial features of land and sea to denote the difference between dark and light regions of the Moon. Riccioli took this further by naming features after terrestrial weather, for example Mare Imbrium (Sea of Showers). One famous feature that owes its name to Riccioli is Mare Tranquillitatis – the Sea of Tranquillity, landing site of the Apollo 11 mission and where the first Human steps were taken on the Moon in 1969.

In total, Riccioli provides a list of over 240 names used on the map. Some have not survived to be in modern use, such as the Peninsula Deliriorum (Peninsula of Insanities) and Terra Sanitatis (Land of Healthiness).

The map itself is divided up in to eight parts (octants) with names assigned to the lunar features placed in keeping with the borders of these divisions. Names within the octants cover astronomers, both ancient and contemporary to Riccioli. Within these, he grouped the names of similar time periods and philosophies together. The grouping of features named after Copernicus and others who shared the understanding of a heliocentric solar system (i.e. a stationary Sun with orbiting planets) are together in 'stormy waters' in the Oceanus Procellarum (Ocean of Storms). They are, however, attached to prominent features on the lunar surface. This is a possible indication of a degree of support for those championing this theory, which would have been at odds with Riccioli’s Jesuit theology.

Another point of interest with Riccioli and Grimaldi’s map is the statement printed at the top of the map “Nec Homines Lunam incolunt” (no men reside on the Moon). This clear statement shows that Riccioli did not believe that there was life inhabiting the Moon.

The Caird Library’s copy of Almagestum novum is part of the Airy Library collection, which represents the library of the Royal Observatory up to 1881. If you are inspired to find out more about the astronomy collections held here at the Caird Library, search our online catalogue at: www.rmg.co.uk/librarycatalogue.

Find out more about the Caird Library and Archive