Aaron Jaffer, Curator of World History and Cultures at Royal Museums Greenwich, highlights some of the objects from the National Maritime Museum's collections related to East and Southeast Asia. 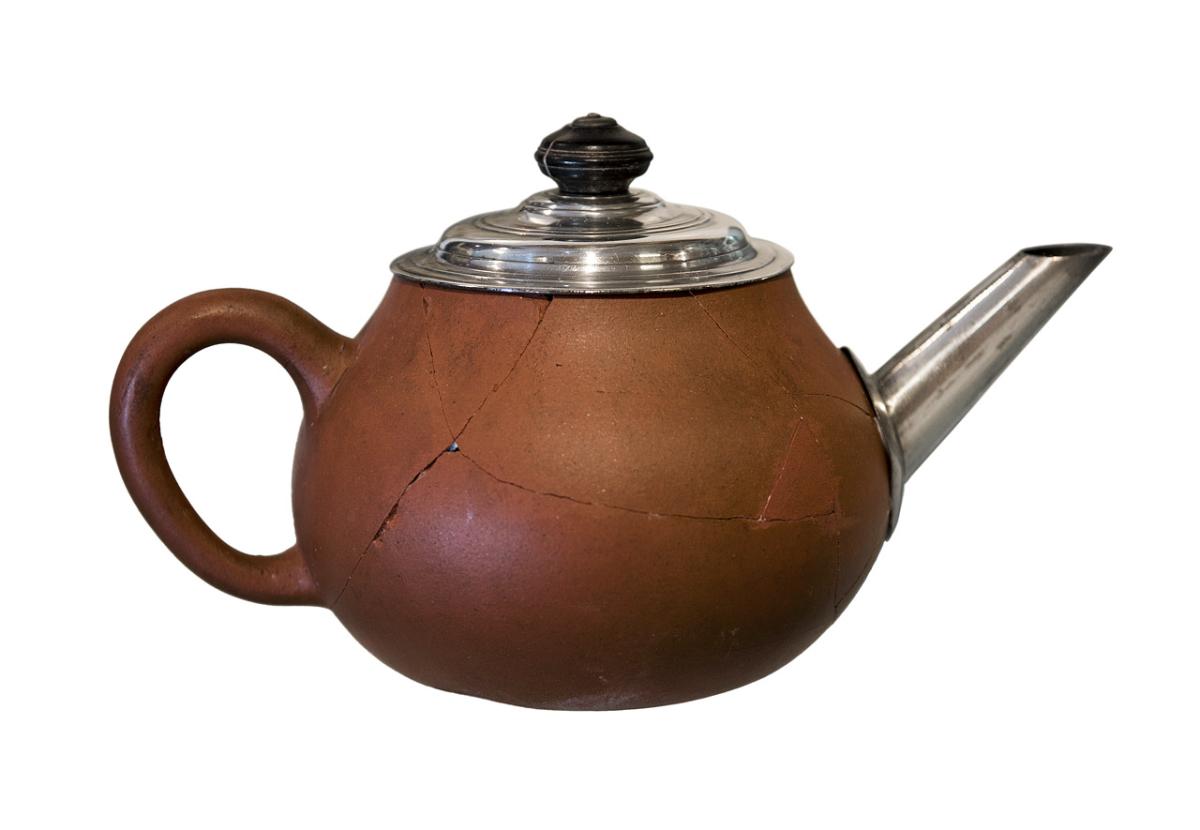 The British adopted tea drinking from the Chinese, later adapting it to suit their tastes (by, for example, adding milk and sugar).

This small stoneware teapot is much plainer than the many ornate teapots you can find in museum collections. This is because it wasn’t used for serving tea in people’s houses, but was instead provided by merchants for sampling tea. It was probably made in the late 1600s in Yixing in eastern China. The silver spout and lid were added later, suggesting someone may have dropped the teapot or accidentally broken it. 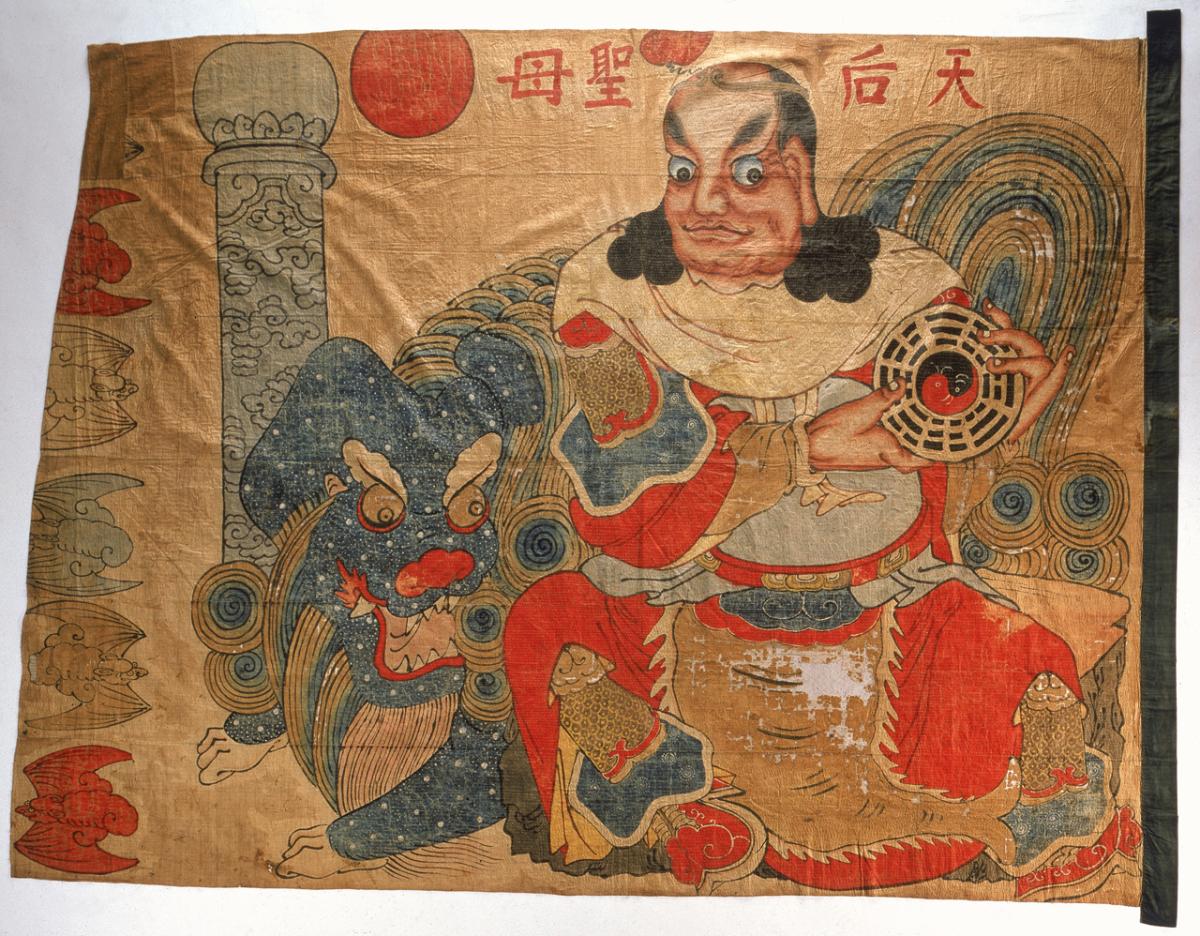 This colourful object has been called a ‘pirate flag’, but it is more likely to have been used inside a pirate’s ship than displayed as a banner on the outside.

It was captured during a joint naval operation launched by the British and Chinese against pirates in the South China Sea in 1849. Their chief target was Shap Ng Tsai, a notorious pirate who extorted money from coastal communities and threatened Hong Kong trade routes.

This ‘flag’ was probably a hanging from a shrine aboard a junk (a type of sailing ship) that formed part of his fleet. It shows a deity named Ziwei Dadi flanked by a fearsome mythical beast and an ornate carved pillar. The red characters along the top refer to another god, T’ien Hou, who watches over the sea. 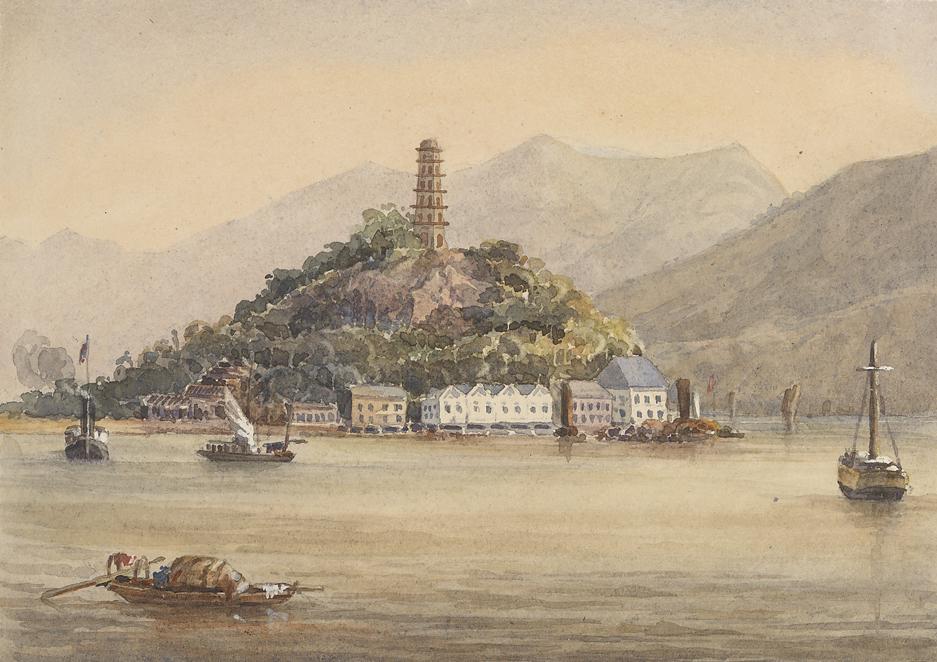 James Henry Butt was a Victorian sailor who served in the Royal Navy and, like many seafarers before and since, he painted the places his ships visited.

He sailed to the Far East during the 1850s and 1860s, producing numerous watercolours of China and Japan. You can still see this famous octagonal pagoda in Mawei in southeastern China. However, due to land reclamation, it is no longer on an island.

Tall buildings like this were useful landmarks for Asian and European sailors as they navigated Chinese waters. 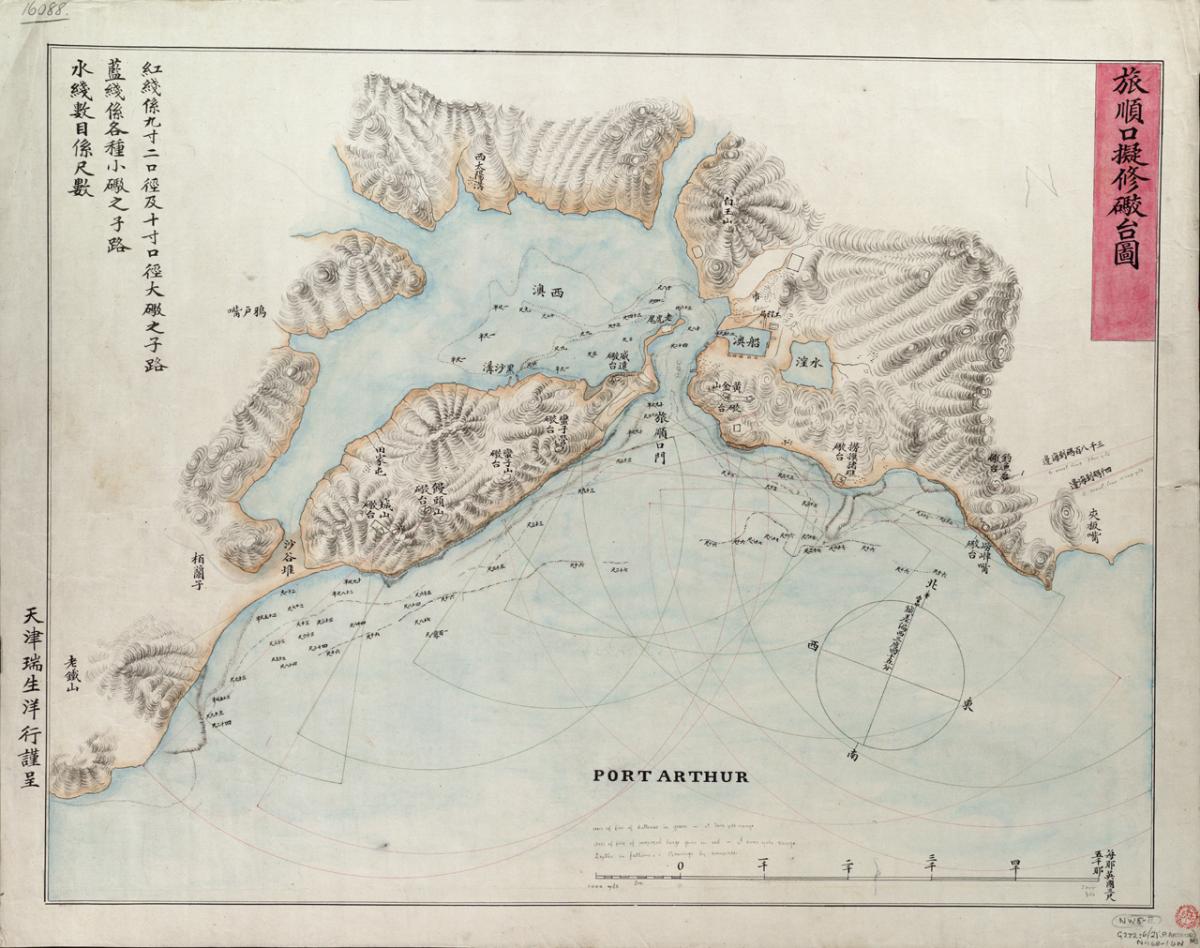 China and its coasts appear on hundreds of maps and charts in Royal Museums Greenwich's collection. This chart shows an inlet called Lüshun on the Liaotung peninsula in northeast China. The British called it ‘Port Arthur’ after the captain of a ship who visited during the Second Opium War (1856-60).

The Qing government began constructing a naval base in this once quiet area in the 1880s as part of attempts to modernise China’s navy. The shading on the chart shows the steep hills that surround the sea, which made it a difficult place to attack.

The area was to become the scene of fierce fighting over the coming decades as foreign powers became ever more involved in Chinese affairs. The Japanese took it twice, once during the Sino-Japanese War (1894-95) and then again, after Russia had leased the port, during the Russo-Japanese War (1904-5). 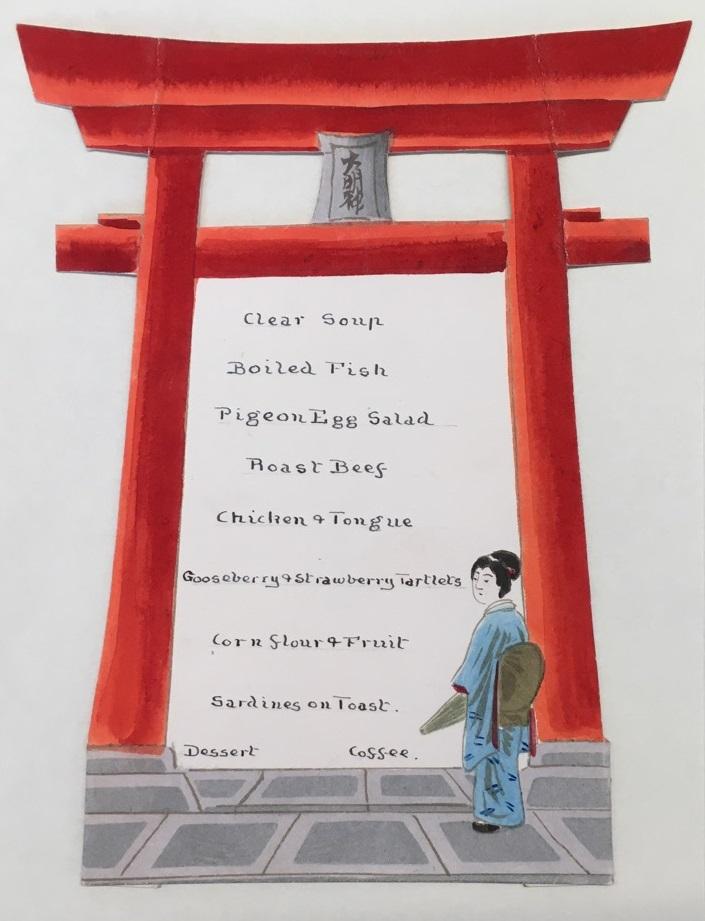 Royal Navy officers of the 1910s and 1920s often hosted formal dinners, which could feature ornate menu cards. This menu lists roast beef, gooseberry and strawberry tartlets, sardines on toast and other Western foods but it is framed by a Japanese structure called a torii.

Thousands of these symbolic gateways can be found across the country, typically marking the entrances to sacred places. This menu was kept by an officer serving on the ‘China Station’ (an operational area covering East Asian waters) and was probably made during or after a visit to Japan.

Many Europeans were fascinated by Japanese culture at this time, often making drawings of Japanese people, buildings, dress and motifs. 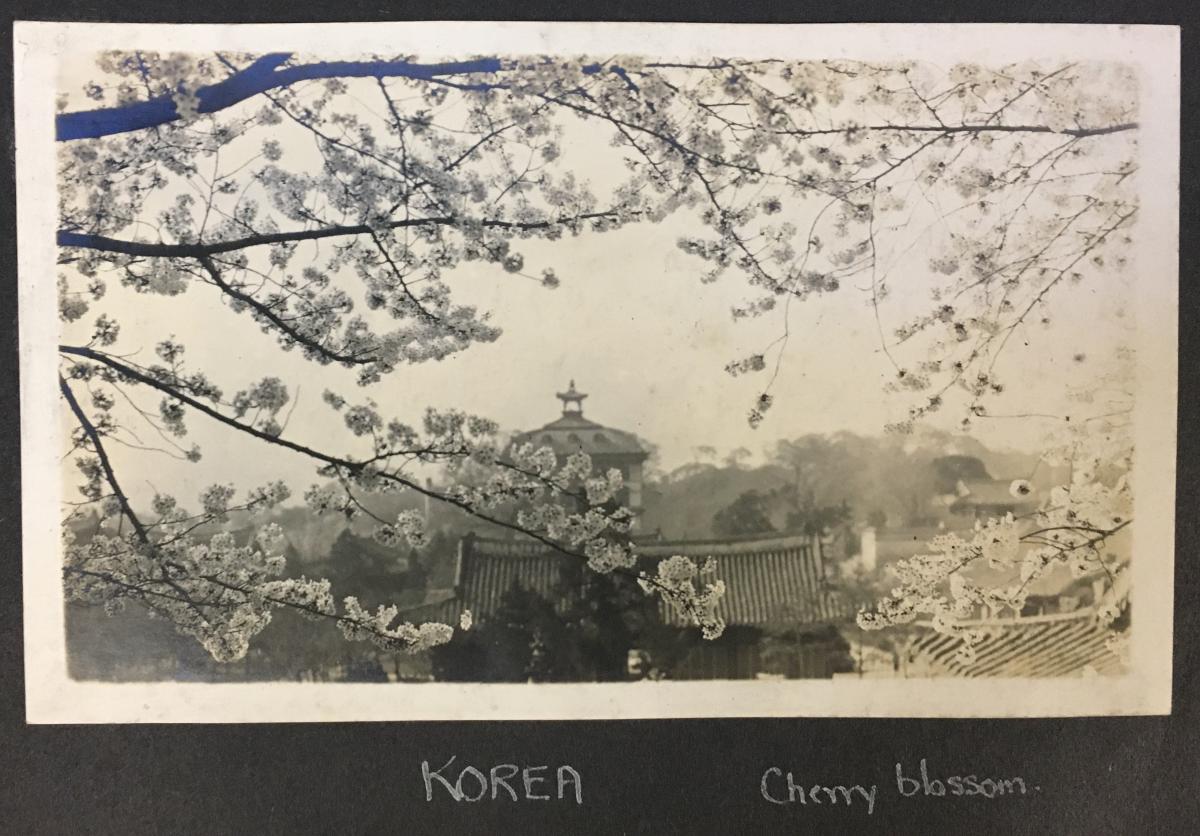 Appreciating the beauty of cherry blossom in Spring is often associated with Japan, where this annual custom is called hanami. It is also popular in China, Korea, the Philippines and Taiwan.

Royal Navy midshipman A.C. Price engaged in his own hanami when he visited Seoul in the 1920s. Officers-in-training like Price had to work and study hard but they were also granted spare time and opportunities to go ashore, which some used to take photos. His camera was unable to capture colour but he was careful to bring the delicate blossom of this tree into sharp focus, producing a simple but beautiful image. 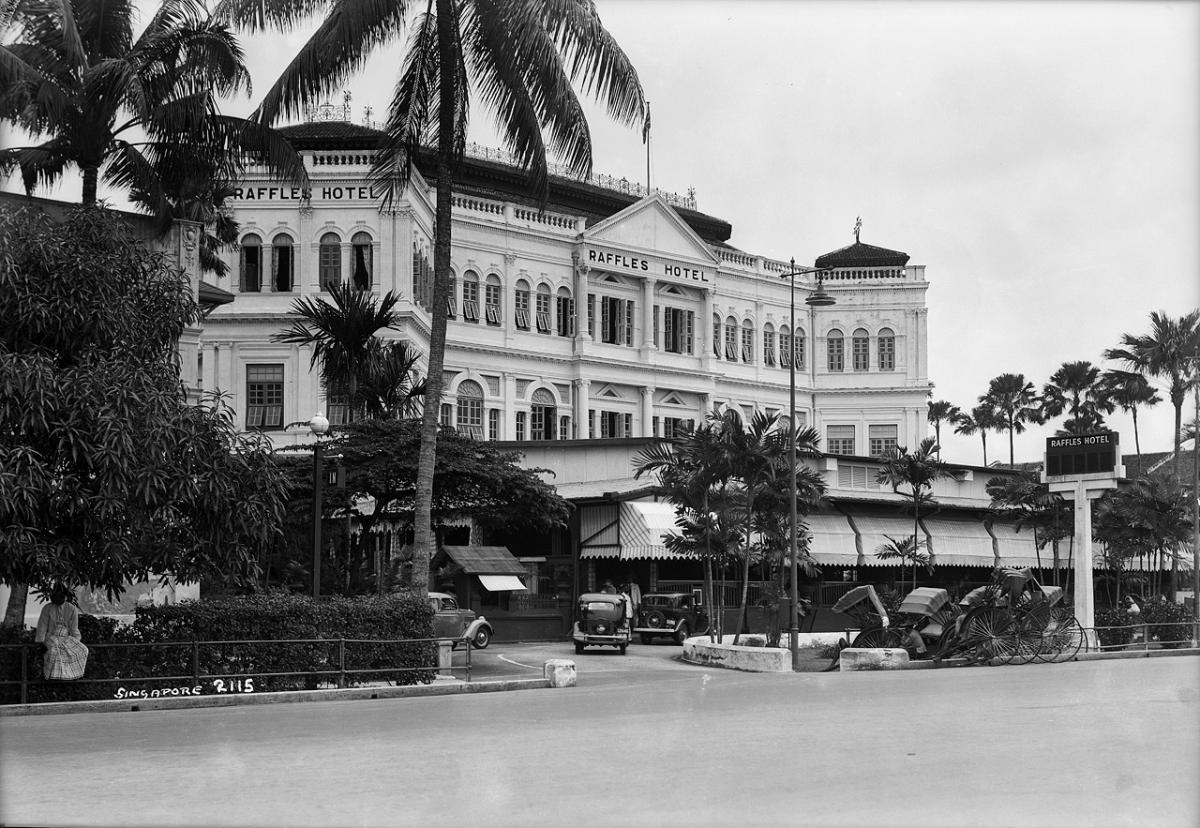 This photographic negative shows the Raffles Hotel in Singapore in the 1920s or 30s, one of the most famous hotels in the world.

A line of rickshaws can be seen on the street outside the hotel waiting to collect passengers. Unlike the auto or electric rickshaws used across Asia today, they relied on the strenuous efforts of man on foot to pull them along. The British colonial authorities phased these vehicles out over subsequent decades as motorcars, which can also be seen in this photo, became dominant on city’s roads. 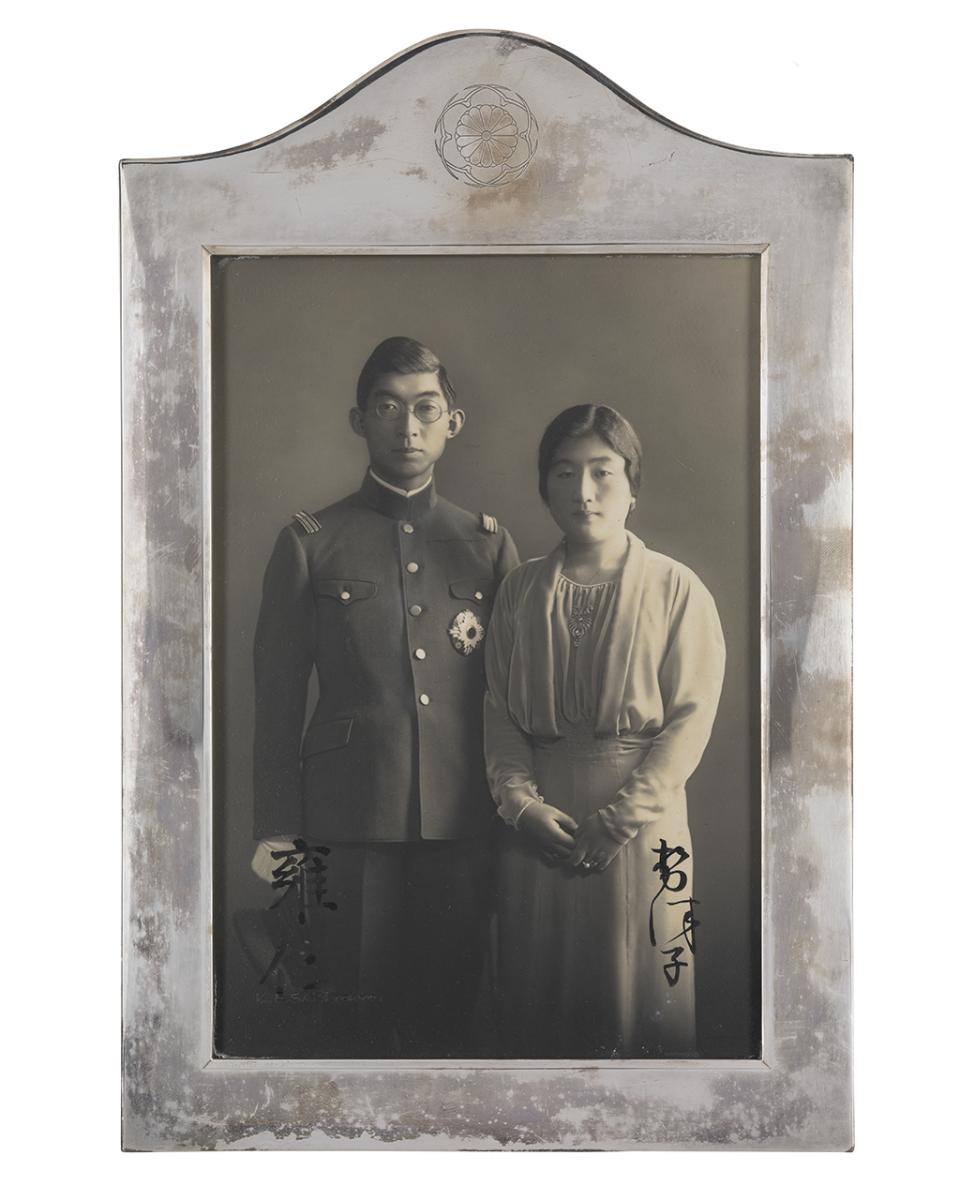 Prince and Princess Chichibu travelled to Britain to attend the coronation of George VI and Queen Elizabeth in 1937.

Japan and Britain had begun the century as allies but relations deteriorated due to their rival empires in Asia. Their representatives nonetheless continued to attend ceremonial events in each other’s countries throughout the 1930s.

Giving images of royals as diplomatic gifts was and is a practice common to both cultures. This photograph, given to a Royal Navy officer, has a chrysanthemum engraved on its silver frame, an important flower in Japan where it is still a symbol of the emperor and the imperial family. 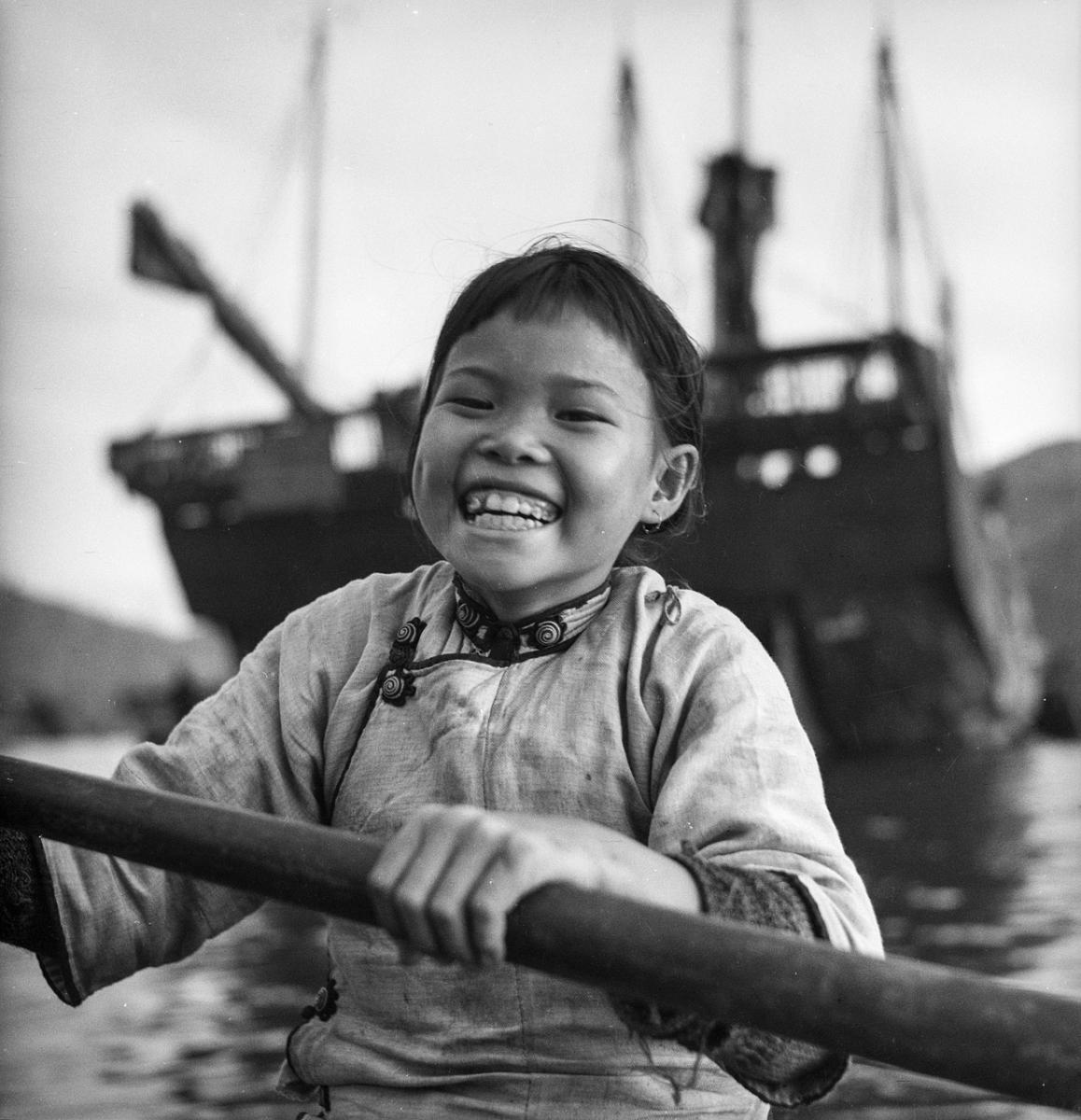 Hong Kong was under British rule from 1842 to 1997. Many thousands of Royal Navy sailors visited or were stationed there during this period.

David Waters, who served aboard HMS Berwick and HMS Eagle between the two World Wars, was one of those fortunate enough to own a camera. He was fascinated by Chinese watercraft and used his spare time to photograph, sail in and collect models of them.

Waters, who would later work at the National Maritime Museum, took this photograph of a smiling girl operating a sampan (a type of flat-bottomed boat) in 1937 or 1938. Sadly, we don’t know the girl’s name.

Find out more about this object Order this print
Image 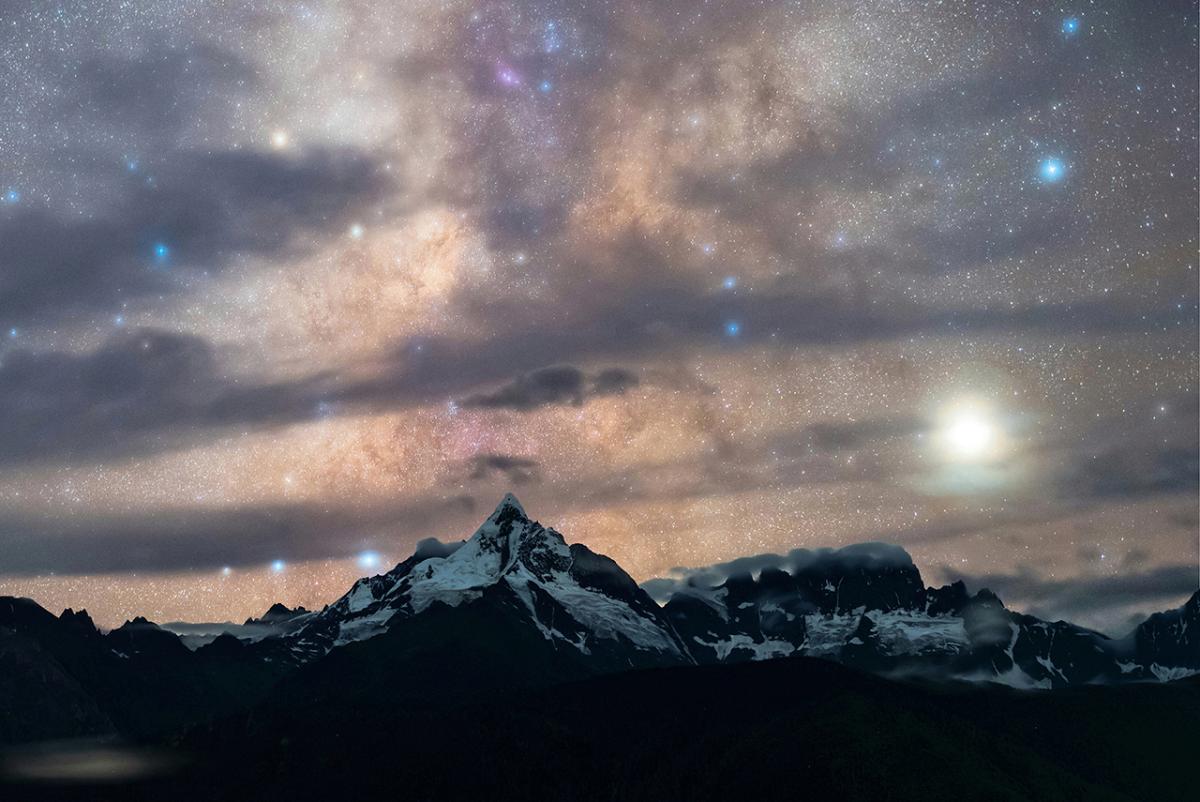 This image is from our Insight Investment Astronomy Photographer of the Year 2020 competition.

We receive entries from all over the world, including many by Chinese photographers showing the skies over China. This image was taken by Zuoxing Zhang and was shortlisted for the Sir Patrick Moore for Best Newcomer Prize. It is taken in Shangri-La City, Yunnan.

Join us at the National Maritime Museum in Greenwich for a fantastic new year celebration
Find out more What is lunar new year?