Royal Museums Greenwich specialists are currently carrying out vital conservation work on A Royal Visit to the Fleet by artist Willem van de Velde the Younger.

The latest stage of the treatment is happening inside the Queen's House itself, giving visitors a unique opportunity to see paintings conservation in action.

What does it take to conserve a 300-year-old masterpiece?

What's currently happening with A Royal Visit to the Fleet?

During Conservation in Action we will be working on the retouching stage, which is one of the last and most visually important parts of the conservation process. 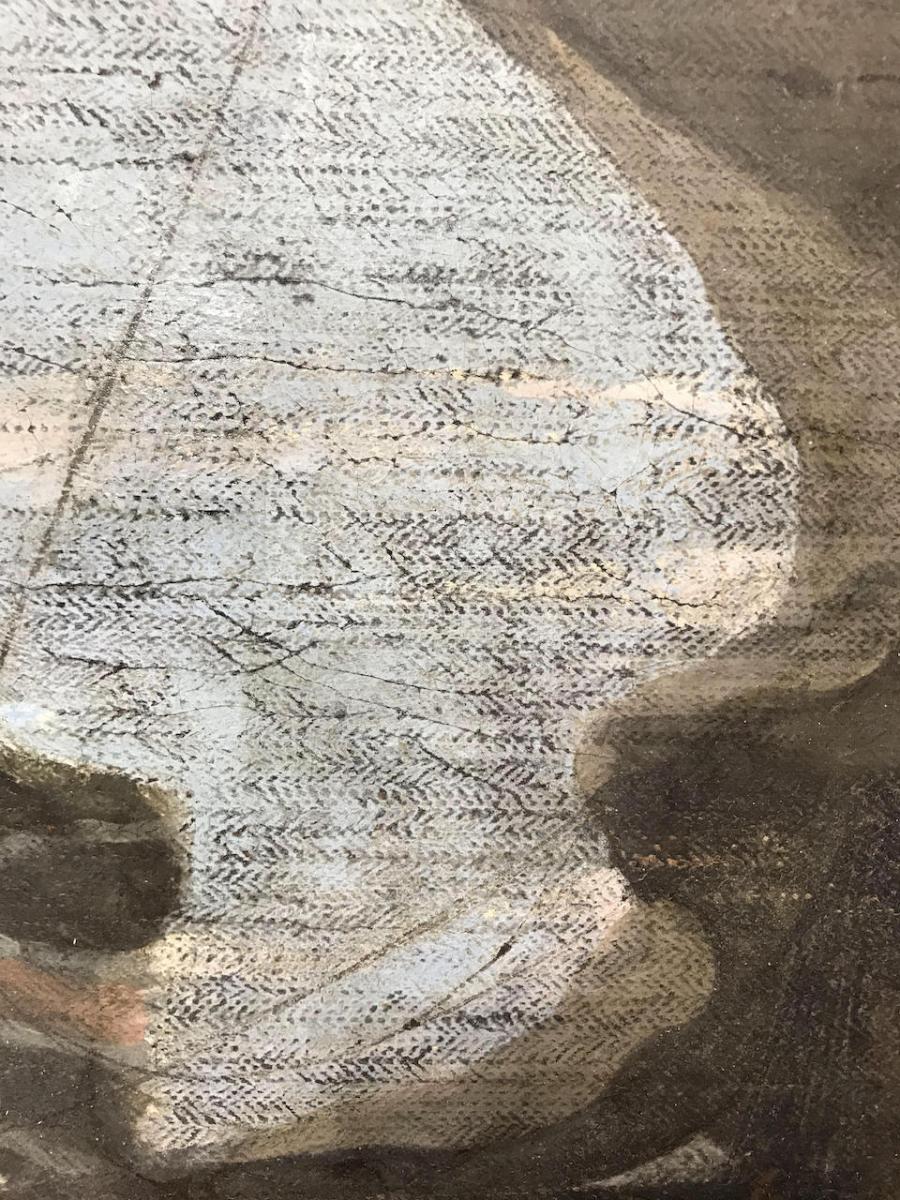 During our initial treatment of the painting, we discovered damage caused by earlier harsh restoration treatments.

In particular, if you get close to the painting you can see numerous small dark spots. These are especially visible in some of the lighter areas of sky, and are the result of the upper paint film having been abraded away, exposing the dark ‘priming’ layer underneath.

Up close, these dots are distracting to the viewer. From a distance they make some areas look darker than they should, disrupting the overall colour balance of the painting.

You can also see a few slightly larger areas of damage. These exist where the painting has lost areas of paint in the past due to tears in the canvas and flaking.

Does 'retouching' mean painting over the original work?

No. Conservators working today are careful to only apply retouching paint to areas of the painting which are damaged or missing, which requires a high level of precision and dexterity – plus the use of very small brushes!

This is so viewers can see and appreciate as much as possible of the original artist’s work, without being distracted by the damage that exists in surrounding areas.

Restricting the application of retouching paint to just the areas of damage is time consuming (it would be much quicker to take a broad brush over a given area!), but it is important as it ensures that original, intact paint is not obscured.

Restorers of past years were not always in a position to take such a careful approach.

Conservation only became a fully recognised profession around the mid-20th century with the introduction of specialist training programmes, a professional ethical framework and an increasing number of new materials and techniques.

Before this time ‘restoration’ was often carried out by artists or craftspeople who were simply tasked with cleaning up a painting in whatever way they found to be most effective and efficient.

This often meant that that their retouchings would extend far beyond the areas of damage (this is what we call ‘overpaint’) using mediums that would discolour over time and become difficult to remove.

Much of the work professional paintings conservators carry out today involves reversing this old restoration work and re-doing the retouchings in a more minimal way, using chemically stable, reversible paint.

Why did the painting need conservation in the first place?

Despite its importance, it has not been possible to display A Royal Visit to the Fleet in recent years due to issues with its structural instability and appearance.

The aesthetics of the painting were disrupted by several layers of thick, unevenly discoloured varnish and poorly matched overpaint from previous restoration treatments.

Most urgently, the paint film was exhibiting lifting and flaking, and there was a notable loss of adhesion between the original and lining support canvases. Both of these issues, if left untreated, would have led to further deterioration in future years.

What exactly are the paints that you use?

The paint medium being used here is a synthetic, resin-based varnish called Laropal A81.

The medium is mixed with pigment to make the paint, and solvent is added to obtain the desired consistency.

Some colours come in the form of a premanufactured paint mix. For others the conservators make it themselves by grinding the dry pigment into the resin solution with a small spatula. These hand-made and factory-made paints are essentially the same thing, but the combined approach gives conservators a wider variety of pigments to choose from.

What other tools do you use for paintings conservation?

What has already happened during the conservation of A Royal Visit to the Fleet?

In order to fully understand what work needed to be done, the painting underwent a technical examination. Its condition was documented and photographs were taken.

Before any retouching work could begin, the painting’s surface was cleaned to remove the superficial dirt that had built up.

This was followed by an initial phase of consolidation to re-adhere the worst areas of lifted paint and make sure the paint layer was secure enough to withstand the work that would come later.

This involved inserting very small amounts of a warm, fish bladder glue called isinglass under the lifted edges of the paint, before gently heating the edges with a spatula to lay them back down. 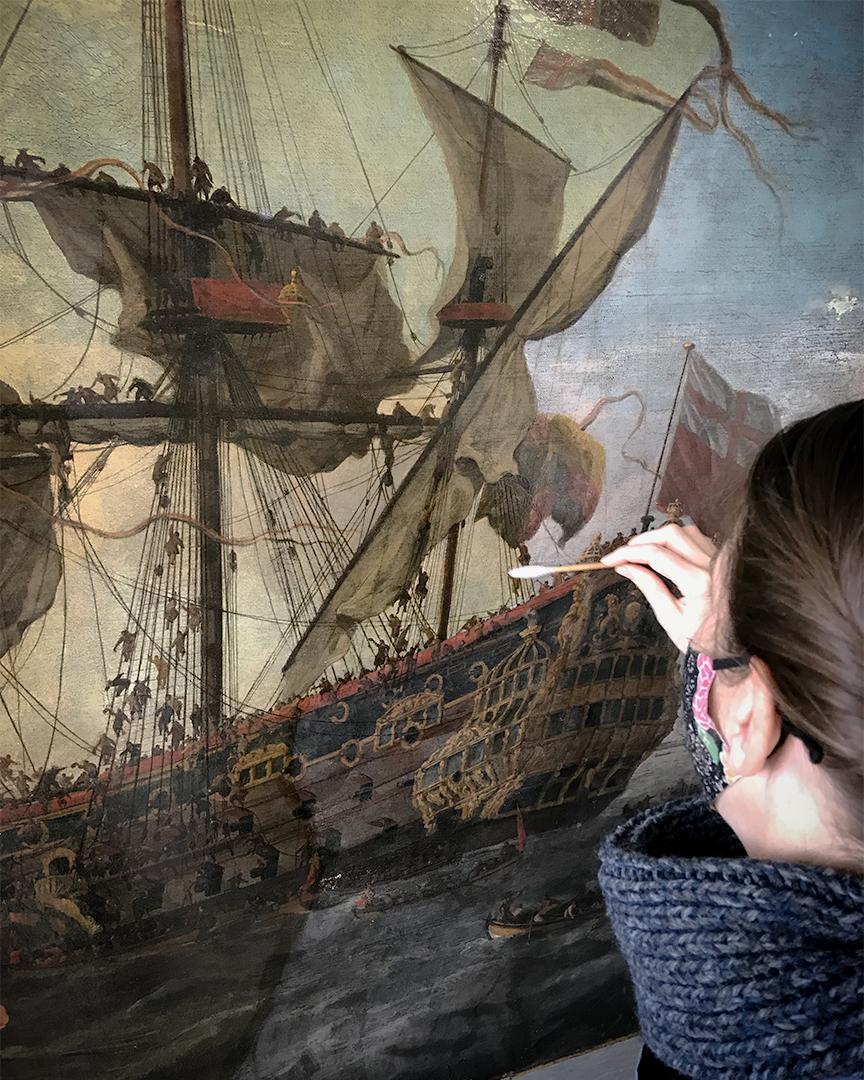 We discovered at least two layers of varnish on the painting.

The first, being relatively recently applied, was only slightly discoloured and was easy to remove with a mild solvent mix applied via cotton wool swabs.

The lower layer was significantly older.

It was also contributing most to the painting’s streaky, yellowed appearance, so its removal made a dramatic difference to the work, bringing out the cool colours and increasing the sense of three dimensionality.

Once the varnish removal was complete, a second round of consolidation was carried out to ensure that the paint layer was as stable as possible ahead of the 'relining' phase.

Relining involved the removal of an old, degraded supporting canvas – scraping away the animal glue and flour adhesive which had been used to attach it – and re-attaching a new canvas with a stable synthetic adhesive.

Although it might sound simple, this stage involves applying heat and pressure, which carries a risk of damaging the painting, so this process needed to be very carefully managed.

Specialist expertise and equipment were required, and the painting had to be sent off-site for this part of the process.

Once back in the studio, an initial protective varnish layer was applied to the surface of the painting, which acts as an isolating layer ahead of the retouching process.

Have you learned anything new or surprising while you've been working on the painting?

Some interesting discoveries were made about the artist’s unusual choice of canvas support. 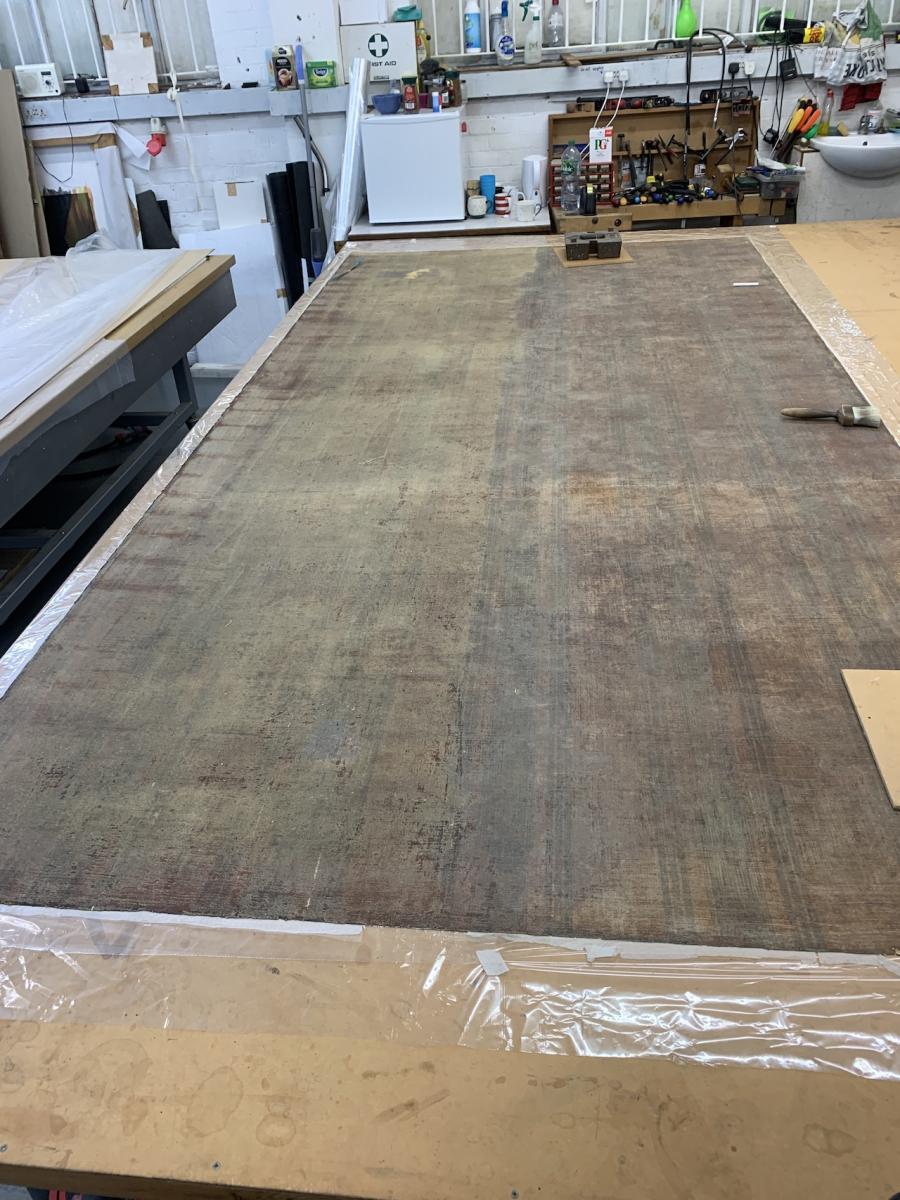 Because the painting had previously been lined (i.e. a support canvas had been applied to the back of the original one during a previous restoration treatment) the original artist’s canvas hadn’t been visible from the back.

When the lining canvas was removed, the original canvas was found to have a set of distinctive dark blue indigo lines running horizontally through the fabric.

This marked it out as 'ticking fabric': a high quality, robust type of canvas typically used for beds, but an unusual choice for an artist’s support.

The size used for the Royal Visit wouldn’t have been available in England at the time, so it’s likely it was imported from the Low Countries at quite some expense.

Nevertheless such a price tag would have befitted an important royal commission and would have meant that the painting could be executed on a single piece of canvas, avoiding a potentially visually distracting seam down the centre of the work. 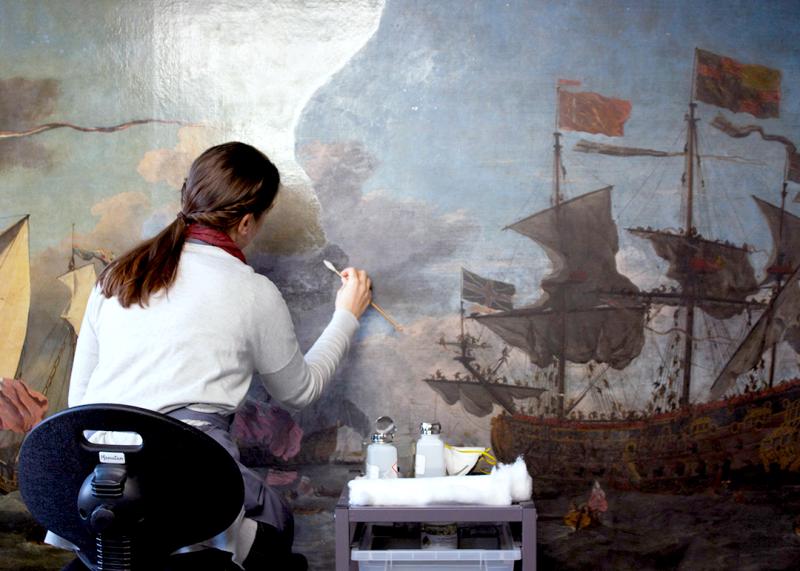 Conservation in action: A Royal Visit to the Fleet
Follow one of the most ambitious public conservation projects ever undertaken at the Queen’s House 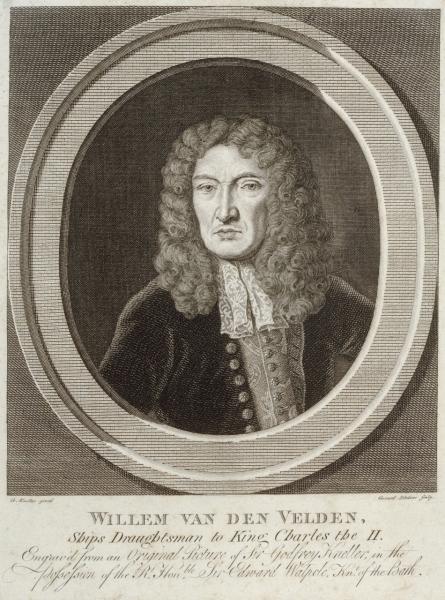 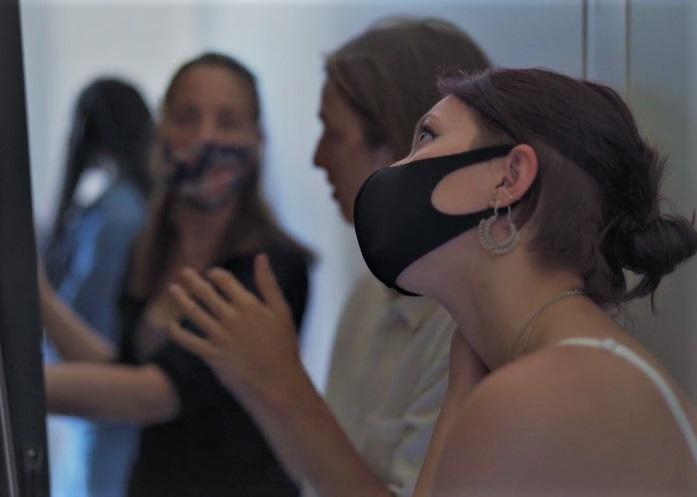