Long before the invention of the telescope or the job of ‘scientist’, people across the world recorded the motions, position and appearance of the Sun.

In this account from the Greek historian Herodotus, there is no doubt that the armies involved were fearful of what we now understand as a total solar eclipse, when the Moon temporarily covers the face of the Sun:

“...just as the battle was growing warm, day was all of a sudden changed into night. This event had been foretold by Thales, the Milesian, who forewarned the Ionians of it, fixing for it the very year in which it actually took place. The Medes and Lydians, when they observed the change, ceased fighting, and were alike anxious to have terms of peace agreed on.

Today we stand on the shoulders of giants with centuries of scientific knowledge to tap into. A quick search online or chat with a modern-day astronomer can wash away most superstitious thoughts.

For ancient civilisations, however, the Sun was wrapped in total mystery together with something they knew then, as much as we do now: the Sun is life.

If someone could flick an ‘off’ switch for the Sun, it would take around eight minutes for the last sunlight to complete its 150-million-kilometre journey to Earth. No sunlight means no heat. No sunlight to feed the leaves of vegetation – the vegetation that feeds most life on Earth directly or indirectly.

Without the Sun, our planet would be just another barren rock in space.

Even without this deeper scientific understanding, the fundamental importance of the Sun to life was recognised. This led to ancient civilisations worshipping the Sun as a life-giver.

In turn, all manner of traditions and ceremonies were created to protect it and ‘summon’ it back. Sun worship might bring to mind thoughts of gruesome human sacrifice in great temples constructed by the Aztecs, but that civilisation belonged to a relatively recent period in human history (1300–1521 CE).

Instead, we can start our journey of exploration by looking back to the Neolithic period, over 5,000 years ago. Here we’ll find an example that combines Sun worship with an early understanding of the Sun’s motions over the course of a year. Predating both the Great Pyramids of Egypt and Stonehenge in England, Newgrange in Ireland is one of the most ancient architectural examples of predicting and using the Sun’s motions for ceremony. The site is a tomb whose full purpose is yet to be understood completely.

At Newgrange a narrow ‘lightbox’ was included in the stone structure that lets sunlight through at sunrise on dates around the winter solstice in late December every year, illuminating the long inner chamber of this passage tomb.

This might not seem like a big deal when you first think about it. We might consider the Sun simply rising in the east and setting in the west. However, celestial mechanics aren’t quite so simple.

Depending on where we are on Earth combined with the time of year, the position of sunrise varies significantly from northeast to southeast, and sunset from northwest to southwest.

To realise this change people had to observe the movement of the Sun in the sky daily and look for any changes. Without going into detail, today we know the factors that cause these changes are the tilt of the Earth and the changing distance to the Sun as we orbit around it.

Taking into account these factors, the position of the Sun in our sky changes across the year. If you were to take a photograph of the Sun every day when the Sun is highest in the sky for where you are (local noon), you would end up with the figure-eight shape seen below. This is called an analemma and tells the story of Earth’s journey around the Sun. 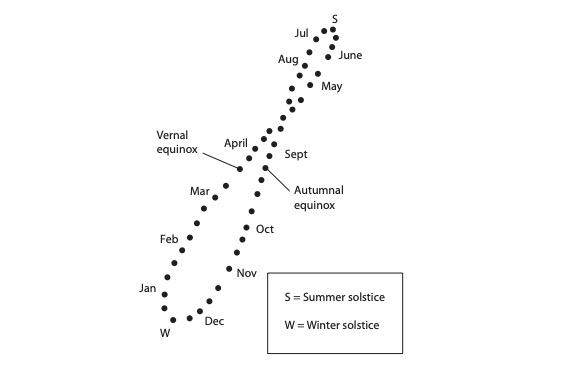 The smaller of the two loops is when we are furthest from the Sun, which occurs in northern hemisphere summer. This point of our ride through the Solar System is the slowest so you don’t see big changes in the Sun’s position happen quickly.

The opposite is seen in winter when we’re closer and so we speed around the Sun faster, creating a larger loop. The extreme ends of the two loops show the winter and summer solstices. On these days the Sun will trace out the shortest and longest arcs across our skies, respectively.

Finally, near the middle of the figure-eight shape are the positions of the Sun at the two equinoxes – spring and autumn. At these points in the year, we experience roughly equal hours of day and night for the planet – once in March, and again in September. These can be seen as the tipping points between the seasons of winter and summer and vice versa.

The analemma is something that can be captured through photography with a lot of patience and consistency. Alternatively, some mathematics, a shadow stick and a watch can be used to achieve the same thing plotted out on graph paper. They’re both year-long projects, but an interesting hobby to truly connect with this rock we live on, hurtling around the Sun at 67,000 miles per hour.

This modern understanding builds on centuries of knowledge, but the gaining of that knowledge has to start somewhere. While Newgrange is not the only example, it illustrates the intertwining of cultural tradition and one of the first sparks of scientific study of the Sun through repeated observations, predictions and invention. Shop
Royal Observatory Greenwich Illuminates: The Sun by Brendan Owens
£9.99
Explore the star on our doorstep, charting the journey from ancient superstition to the deep scientific mysteries yet to be resolved...
Buy Now