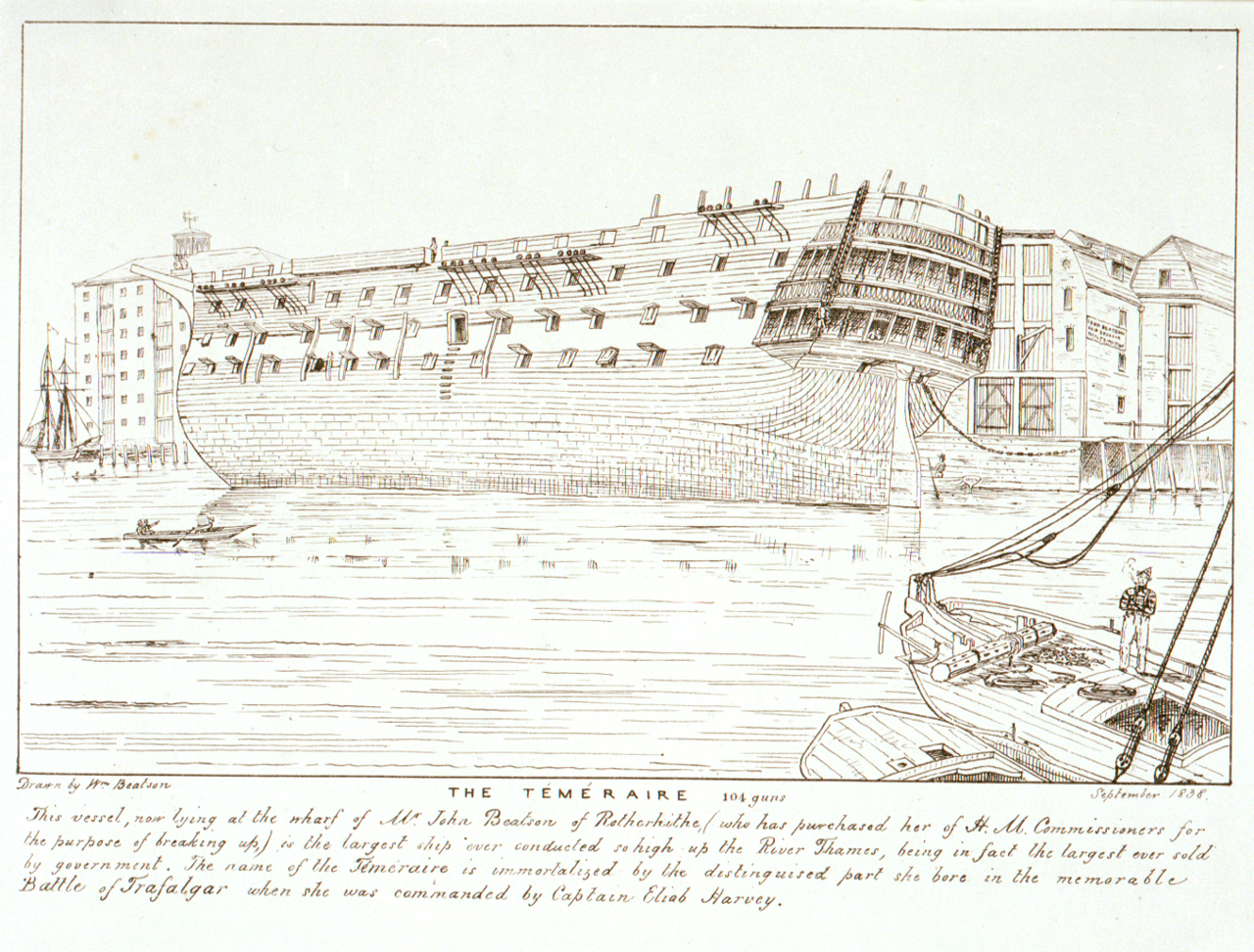 (Updated, February 2014) Etched view of the stern and port side of the 'Temeraire' (1798) in September 1838, moored at John Beatson's Rotherhithe wharf at the start of being broken up, her bows pointing downstream. She had been towed there from Sheerness, over two days (5-6 September) at the top of the spring tides by the steam tugs 'London' and 'Samson'. Described as a ship of 104 guns, she is shown here disarmed and stripped of her masts (taken out at Sheerness), the ports of all three gun decks lying open. Behind the vessel are the large buildings of the wharf (the warehouse on the left with the letters 'JB' on the parapet) and, in the right foreground, the bows of two small craft are shown, one being a Thames barge with a seaman standing above an open hatch. Moored further along the quay is a two-masted vessel. A small boat is being rowed along the length of the Temeraire, one of the passengers pointing at the hull. The image is signed 'Drawn by Wm. Beatson', who was John's younger brother and dated 'September 1838'. His inscription below reads: ' THE TEMERAIRE 104 guns / This vessel, now lying at the wharf of Mr John Beatson of Rotherhithe, (who has purchased her of H.M. Commissioners [of the Admiralty] for / the purpose of breaking up) is the largest ship ever conducted so high up the River Thames, being in fact the largest ever sold / by government. The name of the Temeraire is immortalized by the distinguished part she bore in the memorable / Battle of Trafalgar when she was commanded by Captain Eliab Harvey.' Though built as a 98-gun second rate, the increase of guns was not unusual: Beatson includes accents in his spelling of 'Temeraire', which were usually omitted in the English spelling.

'Temeraire' was commissioned as a 98-gun, Neptune-class, second-rate ship of the line and named after a 74-gun French ship captured at the Battle of Lagos in 1759. She was built at Chatham dockyard and launched on the 11 September 1798. Approximately 5000 English oak trees were used in the construction of the hull. The length of the gun-deck was 185 ft (56m), the beam 51ft (15m) and the nominal crew
was 720. Though a second-rate she was as large as many first-rate ships of the line, and larger than Nelson's 'Victory' of 40 years earlier. During early service in the West Indies, the crew mutinied and the ship was ordered back to Portsmouth where the ringleaders were tried and hanged. The 'Temeraire' was badly damaged at the Battle of Trafalgar where she fought alongside the 'Victory' under the command of Captain Eliab Harvey. She was converted into a prison ship in 1812 and then, from 1815 to 1836, used as a receiving and depot ship at Sheerness. In August 1838 she was bought by John Beatson at a regular Navy Board ship auction and towed to Rotherhithe to be broken up, her final journey being famously commemorated (rather than accurately recorded) in J.M.W. Turner's painting, 'The Fighting Temeraire'.
Back to Search Results
Buy a print License an image
Share:
Link copied to your clipboard!