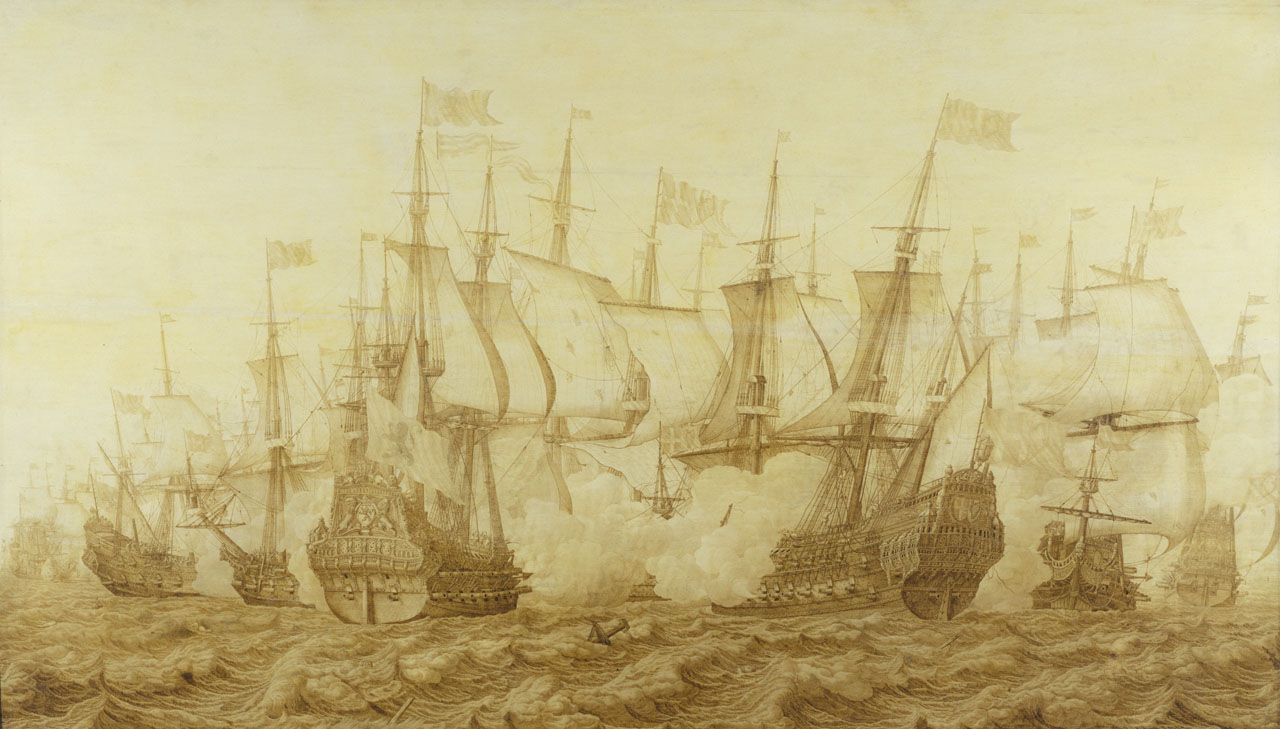 A large grisaille drawing in brown ink. It shows the English and Dutch fleets engaged during the Battle of the Gabbard, 2 June 1653. The increasing conflict of trade interests between England and the Netherlands in the first half of the 17th century came to a head in 1651, when Cromwell's Navigation Act restricted English trade to English ships and thereby struck at the Dutch position as 'the carriers of Europe'. A Dutch diplomatic mission to resolve problems failed and the first of three rapidly ensuing Anglo-Dutch sea wars that lasted to 1674 broke out in 1652 (-1654).

The Gabbard action took its name from the shoal off the Suffolk coast near Solebay where it was fought. Both sides fielded their full force, the English with 100 ships and five fireships and the Dutch with 98 ships and six fireships. The English were under the joint command of the Generals at Sea, George Monck and Richard Deane, joined on the second day by Admiral Robert Blake, while Lieutenant-Admiral Maarten Tromp commanded the Dutch. During the first day, Tromp boarded Admiral William Penn's flagship, the 'James', 66 guns, but was beaten back. Boarded in turn by Penn, Tromp only managed to dislodge him by blowing up the decks of the 'Brederode', 59 guns. On the second day the Dutch broke in confusion after Blake joined the fray, and were forced to accept that the English were masters of the sea. Deane was killed by the first salvo at the Gabbard and Blake became seriously ill. So it was left to Monk to command alone at the last action of the war, the Battle of Scheveningen on 31 July.

On the right side of the picture is the 'Resolution', 88 guns, previously known as the 'Prince Royal'. She is shown in port-quarter view, in action to port with the 'Brederode' in starboard-quarter view, on the left of the picture. The latter's stern is ornately carved with lions both holding the Dutch lion cartouche and also sitting on the rail. The date of the ship '1645' is inscribed on her stern. The 'Resolution' is also in action to starboard with a Dutch ship, bow on. Another Dutch ship to the right and beyond is almost stern on.

The 'Brederode' is also engaged to port with an English ship, of which only the port bow can be seen. There are ships in action in the left background. The profusion of masts and flags demonstrates the number of ships involved in the action. The English ships wear the Commonwealth colours of a St George's cross and Irish harp. The 'Brederode' wears a flag and ensign with the lion of Holland. Behind the principal ship on either side is a line of their fleet. The centre of the painting is obscured with smoke. In the foreground the artist has created the rhythmic effect of the movement of the waves. Wreckage is shown in the water in the central foreground.

The technique of grisaille involved drawing with pen and ink, or ink wash, on prepared gesso panels or canvas and is more accurately described as pen-painting (penschilderij). This technique enabled the drawing to be highly detailed and demonstrate the artist's ability and knowledge of shipping. In this painting the artist has used pen and brush in brown pigment over graphite under-drawing. The off-white ground is laid on oak panel. Pen-painting was pioneered by Witmont and his friend Willem van de Velde the Elder, who were its two finest practitioners. Witmont was born and died in Delft and was also an engraver and a member of the Guild of Delft from 1644. The painting is signed 'H. Wit Mont' on the floating spar lower right and inscribed on the stern of the 'Brederode', 'ANNO. BRE DE ROO DE. 1645'.
Back to Search Results
Buy a print License an image
Share:
Link copied to your clipboard!