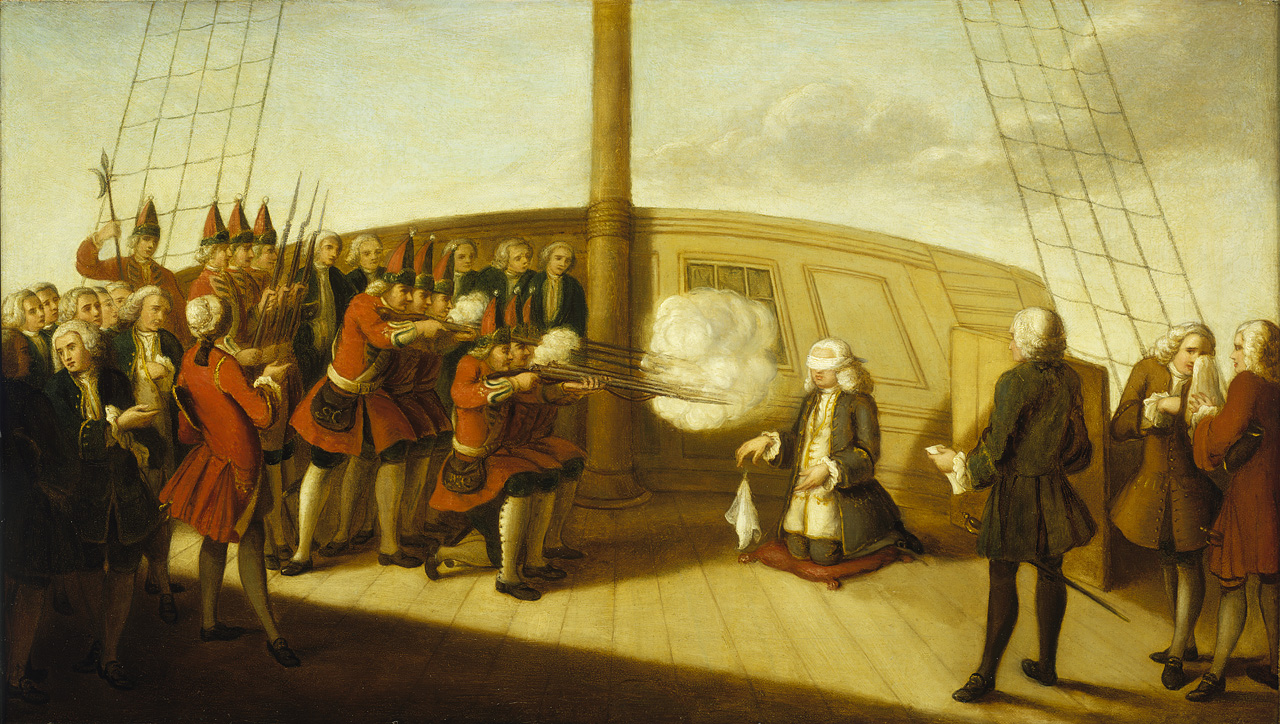 A painting showing the execution of Admiral the Hon. John Byng by firing squad, on the quarterdeck of his former flagship, 'Monarch', at Portsmouth, after he was found guilty by court-martial of failing to do his utmost in preventing the French capture of Minorca in 1756, at the start of the Seven Years War.

Byng had been ordered to sail from England to Gibraltar with ten ships to land reinforcements for the garrison there. He was then to pursue the French fleet, which he learnt had sailed from Toulon under the command of the Duc de Richelieu and had captured Minorca, an important British-held island at the time. The French had taken the whole island with the exception of the fortress and castle of St. Philip where the British commandant, General Blakeney, and a small force were besieged. When Byng informed the Lords of the Admiralty of this he also criticized the wretched condition of the ships under his command, the neglected state of the magazines and storehouses at Gibraltar, and the general lack of facilities to refit the fleet for serious action.

Byng's subsequent engagement with Richelieu was inconclusive, as many such events of the time were for various unexceptional reasons. However, he compounded initial failure by accepting the subsequent opinion of a council of war of his commanders, that nothing further could be attempted given the state of the fleet. This left the French to secure the surrender of Blakeney's force and their hold on the island. The result was Byng's arrest and imprisonment at Greenwich Hospital prior to a month-long trial at Portsmouth in which, in effect, he was made a scapegoat for government failure to send out a force adequate to the task, and under a more experienced fighting commander. Contemporary accounts reveal that he bore the trial and sentence with great fortitude. It took place on board the 'St George' under the presidency of Commodore Thomas Smith (1707-62; see BHC3032) who on 27 January 1757, and as required by the Articles of War, pronounced sentence on him after he was he was found guilty of neglect of duty for not doing his utmost to take, sink, burn and destroy the enemy ships. The court none the less made a strong recommendation for clemency on the grounds of Byng's personal courage in the action but George II refused to grant it. On Monday, 14 March 1757, all the men-of-war at Spithead were ordered to send their boats with the captains and all the officers of each ship, accompanied with a party of marines under arms, to attend Byng's execution on the 'Monarch'. As a result there was a prodigious number of other boats round the ship, although the painting gives no indication of this.

The scene is viewed from the break of the quarterdeck, aft to the coach and mizzen mast, but with no sign of the wheel. To the left of the mast the firing party of nine marines is drawn up in three lines. The first is shown on one knee and firing, the second is standing and firing, and the third has muskets grounded. A halberdier stands behind them. Their officer is in the left foreground, his hat under his left arm, with his back to the viewer. To his left is a group of senior officers and officials. In the background, behind the firing party, is a row of what appear to be junior officers.

To the right of the mast Admiral Byng is shown in full-dress uniform, blindfolded and kneeling on a cushion, facing the firing party. He had wanted to have his face uncovered but his friends felt eye contact might intimidate the marines and prevent them from taking aim properly. He allegedly threw his hat on the deck, knelt on a cushion, tied one white handkerchief over his eyes and dropped the other as a signal for his executioners, who fired a volley. In the painting he has just dropped the handkerchief from his right hand as the signal to fire. In the right foreground a man facing away from the viewer holds a scroll that is probably the execution order. On the right two of the admiral's supporters are shown in tears. One is thought to be George Lawrence, Byng's secretary, to whom he had just given his watch.

A contemporary engraving by Bowles shows a similar scene, although Byng is not in uniform. The origin of the painting is unclear and although it is traditionally thought to be the original from which the engraving was taken, it is in fact more likely that the painting was made from the engraving, since contemporary accounts state that Byng wore a light grey coat at his execution. The episode provoked the French writer Voltaire's famous remark, in his novel 'Candide', that in England 'it is thought good to kill an admiral from time to time to encourage the others'. Scarcely less memorable, if less known, is the bald line in the Master of the 'Monarch's' log recording the execution: 'at 12 Mr Byng was shot dead by 6 Marines and put into his coffin'. To that extent at least the painting seems accurately to reflect the facts. An unnamed seaman, who attended Byng at his execution and testified (as did others) to the bravery with which he met his fate, was still alive as a Greenwich Pensioner as late as 1835.
Back to Search Results
Buy a print License an image
Share:
Link copied to your clipboard!