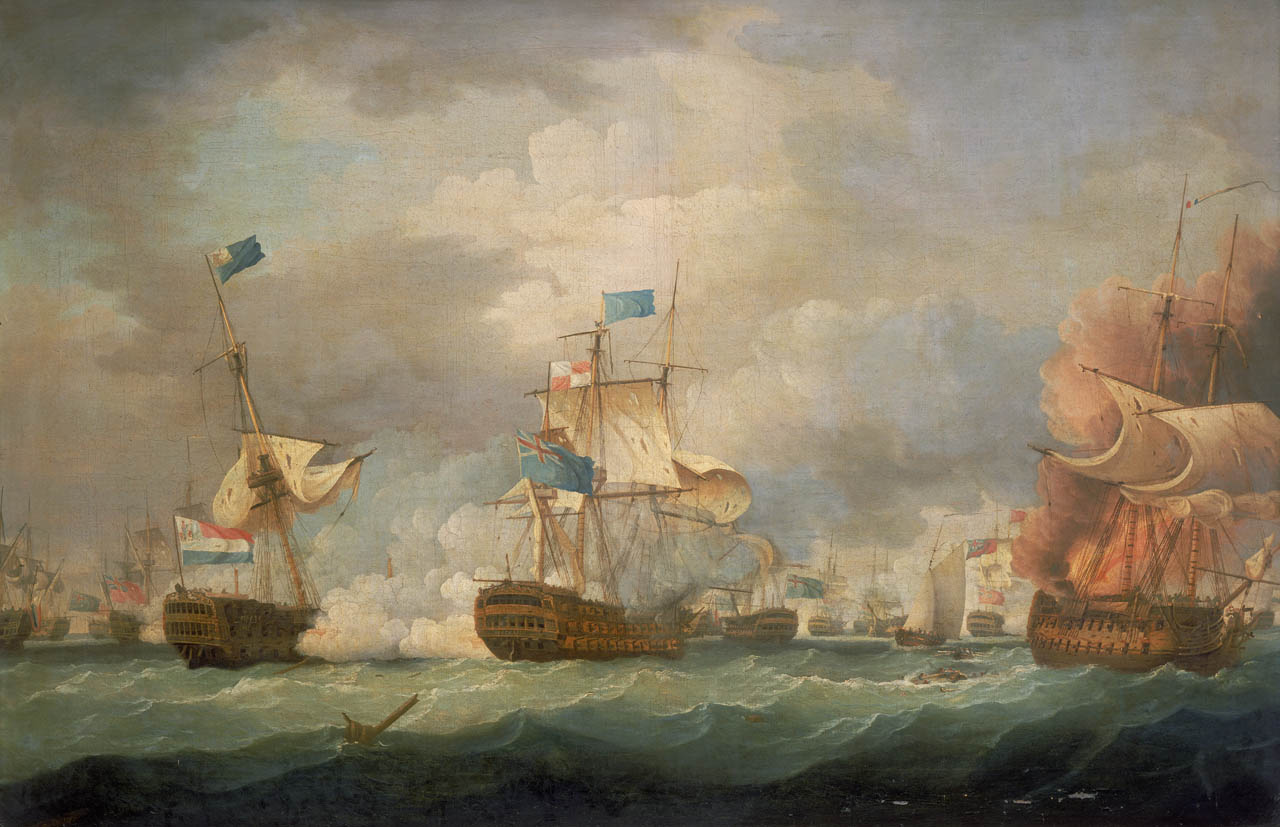 Throughout 1797, with Holland in enforced alliance with Revolutionary France, the British Admiral Adam Duncan had been stationed watching the Dutch fleet in Den Helder. His difficulty in maintaining this vigil was compounded by the events surrounding the Nore Mutiny in May. By early October things were back to normal and so Duncan took his squadron back to Yarmouth to re-store and refit. The Dutch fleet took advantage of his absence and came out almost immediately. The British lookout still on station sent the cutter 'Black Joke' hurrying back to England to warn Duncan of the threat posed by the Dutch. He immediately put to sea and early in the morning of the 11 October the two fleets were in sight. The Dutch were in close order 18 miles off their coast awaiting him. Action began at 12.30 pm and by 3.30 pm. Duncan was able to send off a cutter with a dispatch to the Admiralty to say that 11 enemy ships had been taken. Although the battle was not tactically impressive Duncan showed leadership by taking his flagship into action in difficult waters. This inspired his captains and their determination proved decisive against a resolute opponent.

In the centre of the picture, in starboard-quarter view, is Duncan's flagship the 'Venerable', 74 guns in action with the Dutch Vice-Admiral J. W. de Winter's 'Vrijheid', 74 guns, shown to port. 'Venerable' is flying the blue ensign from the mizzen and Duncan's blue admiral's command flag at the main. She also flies a flag with red and white squares, which is the Number 5 signal, to 'engage the enemy'.

The 'Vrijheid' flies the Batavian ensign from the stern and the admiral's blue command flag from the main. The short-lived Batavian Republic was formed when the Netherlands fell under French domination. Naval flags were altered by the insertion of a panel containing a representation of a female figure seated in a patch of greenery and holding a spear, on which is the Cap of Liberty. At her feet is a lion in a reclining position, its head turned sideways and with a fierce expression. This device was abandoned after the republic gave way to a monarchy in 1806. On the 'Venerable', a sailor who is identifiable as Jack Crawford of Sunderland can be seen nailing Duncan's flag back onto the stump of the main-royal mast. The 'Vrijheid', in starboard-quarter view, is still firing at the 'Venerable' to starboard but her fore and mizzen masts are gone, and her main is on its way over the port side.

In the right foreground is the Dutch ship 'Hercules', 64 guns, Commander Ruijsoort, in starboard-bow view and on fire aft, with her mizzen gone. Between the 'Hercules' and 'Venerable' is an upturned boat with sailors struggling in the water and another boat racing towards it. Beyond those is the cutter 'Rose', 10 guns, Lieutenant Joseph Brodie, in port-bow view. In the background between the 'Rose' and the 'Hercules' is the 'Monarch', 74 guns, of Vice-Admiral Richard Onslow, in starboard-quarter view and firing to starboard. In the background to the left of the 'Rose' is the dismasted Dutch 'Jupiter' of Vice-Admiral Reijntjes in port-bow view, a British ship in port-quarter view, a captured Dutch ship and the stern of two escaping Dutchmen. The background between the 'Vrijheid' and 'Venerable is obscured by smoke but on the extreme left a British ship, in starboard-quarter view, is engaging the 'Vrijheid', and the sterns of three others can be seen, one being a captured Dutchman. There is wreckage spread in the foreground and a spar is shown floating in the water between the 'Vrijheid' and the 'Venerable'.

Whitcombe was born in London in about 1752 and painted ship portraits, battle scenes, harbour views and ships in storms. Although his output was vast, little is known about him. He produced a large number of subjects from the French Revolutionary and Napoleonic Wars, 1793-1815, and exhibited at the Royal Academy between 1783 and 1824. His depiction of ships implies specific knowledge of life at sea, although he probably spent most of his career in London. Many of his works were engraved and they included 50 plates to James Jenkins's account of 'The Naval Achievements of Great Britain', published in 1817. This painting is signed and dated 1798 and was exhibited at the Royal Academy in the same year with the title: 'The Victorious Battle gained over the Dutch by the English, under the command of Viscount Duncan, Admiral of the Blue, the 11th of October, 1797'.
Back to Search Results
Buy a print License an image
Share:
Link copied to your clipboard!