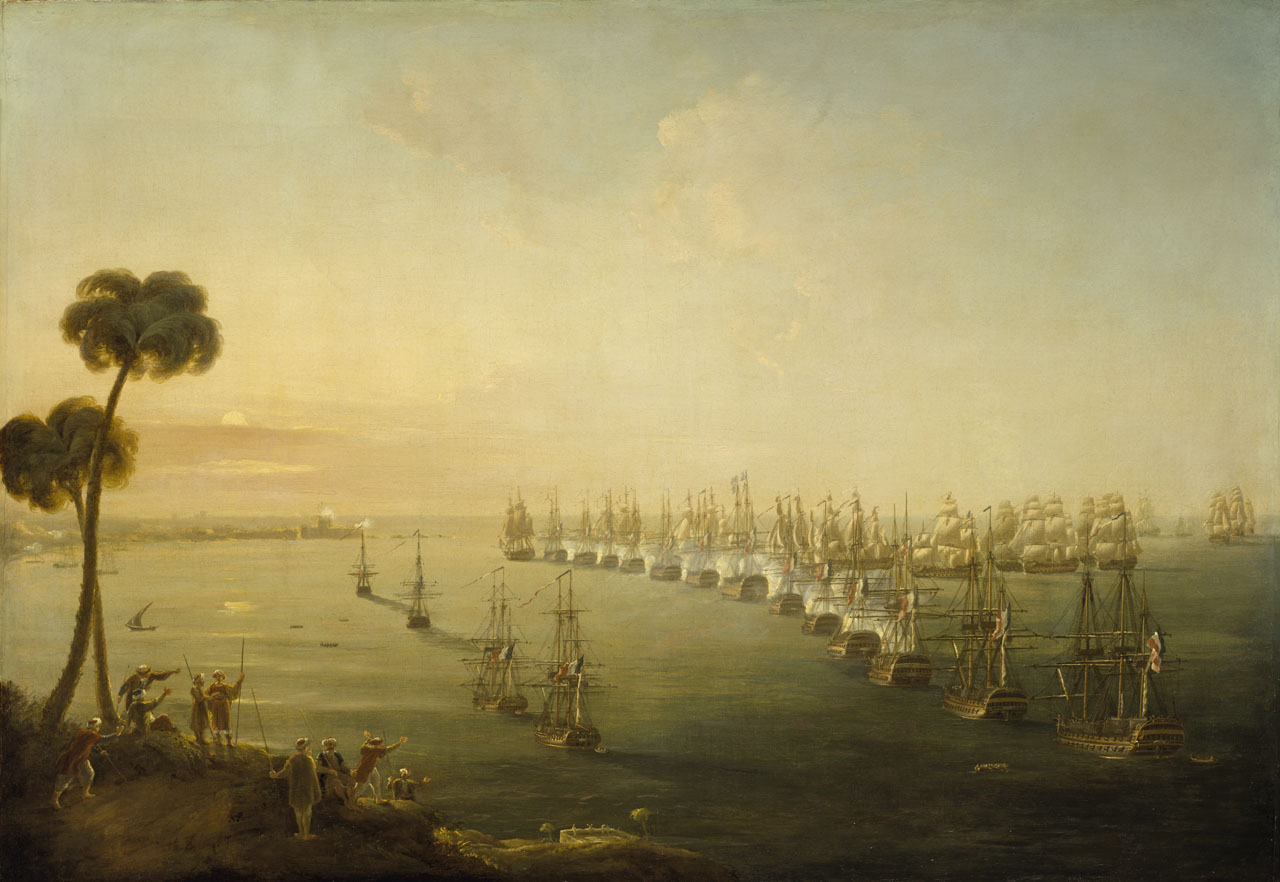 A depiction of a battle during the French Revolutionary War, 1793-1802. On 19 May 1798, Napoleon sailed from Toulon on his hazardous adventure to Egypt, capturing Malta en route. On realizing this, Rear-Admiral Sir Horatio Nelson initially looked for them at Alexandria, and finding no French there, sailed back to Syracuse in Sicily to reposition before returning to Alexandria. There, on 1 August, he received a signal that the French fleet had been sighted anchored in Aboukir Bay, 15 miles east of Alexandria. Thence Nelson headed, driven by a fresh breeze, and appeared off Aboukir Island at 5.30 pm. Despite the failing daylight, his ships immediately attacked the head of the unprepared French fleet at anchor, commanded by Admiral Brueys. Three ships rounded the bows of the leading French ships, one passing between the first and second ship and another between the sixth and seventh.

In the left foreground both the turbaned figures holding staffs and gesturing towards the action in the bay, and the carefully positioned palm trees, evoke the sense of place. Offshore in the centre is the French frigate 'Justice', 40 guns, anchored in port-quarter view, and ahead of her the 'Diane', 40 guns. Two more anchored stern-on and further off and to the left are the 'Artemise', 40 guns, and the 'Serieuse', 36 guns. In the left background, Aboukir Island is shown with guns firing from the French fort and the gunboats on the left. By the time the battle was at its height, night had fallen.

Many of Pocock's preparatory sketches for the Battle of the Nile survive and the artist placed considerable importance on accuracy, referring to his annotated drawings and sketch plans in the production of his oil paintings. Pocock was born and brought up in Bristol, went to sea at the age of 17 and rose to command several merchant ships. Although he only took up painting as a profession in his early forties, he became extremely successful, receiving commissions from naval commanders anxious to have accurate portrayals of actions and ships. By the age of 80, Pocock had recorded nearly forty years of maritime history, demonstrating a meticulous understanding of shipping and rigging with close attention to detail. The painting is signed and dated 'N Pocock 1808'.
Back to Search Results
Buy a print License an image
Share:
Link copied to your clipboard!