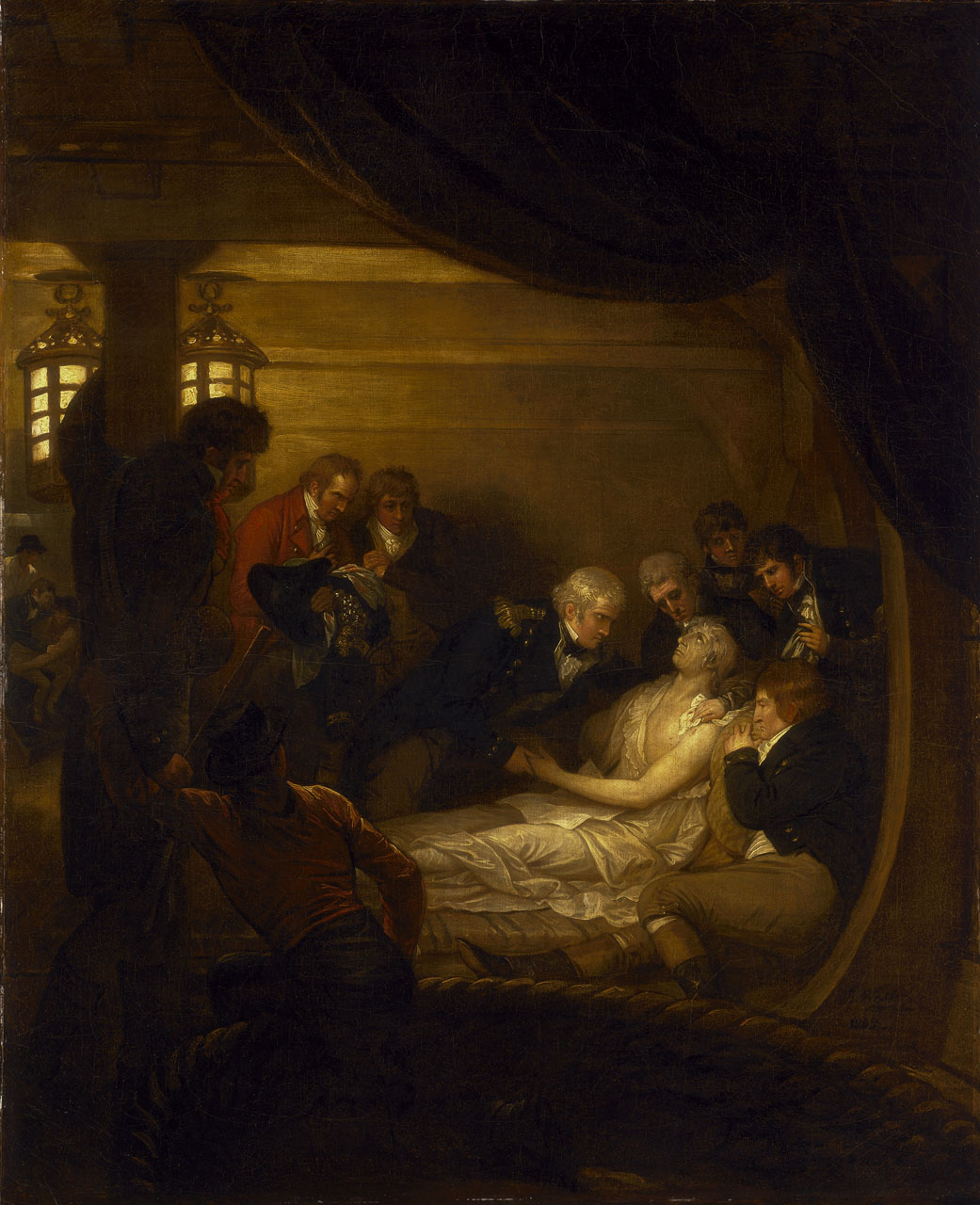 The scene in the cockpit of 'Victory', 100 guns, during the Battle of Trafalgar, 21 October 1805. The narrative combines the portraiture of the principal figures with an enhanced history painting and shows Lord Nelson's dying moments. He lies propped on pillows, in profile, on the right of the picture, left side visible. His shirt is ripped open and he is draped in a white sheet. The artist evokes neo-classical funerary statuary through his emphasis of Nelson's pallor.

Figures are arranged around the death scene. On the right is Mr Burke the purser, in left side profile, seated in the foreground and supporting Nelson's pillows. Behind Nelson, in left profile, the head and shoulders of Dr Beatty, the senior surgeon on board the 'Victory', are visible with his right hand holding a handkerchief around the wound. His assistant surgeon, Neil Smith, is shown full-face beside him to the left, straining forward to hear Nelson's dying words. Beyond is the Revd Dr Scott, the chaplain, leaning over Nelson to support his head. Shown in right profile bending forward in front of Nelson, and holding his left hand, is 'Victory's' captain, Thomas Hardy. Standing to the left against the bulkhead and shown nearly full face is Henry Chevalier, Nelson's steward, holding his master's coat and breeches. To the left of him, in right profile in a red coat is Guitan, Nelson's valet. They are both facing towards Nelson. In the left foreground is a stanchion with two lanterns, which provide the only light on the scene. The light from the lanterns illuminates Nelson and highlights the clothing of the onlookers. Standing in the shadows, Mr Bunce, the carpenter, leans against the pillar, right side view with his left arm around it. He holds a hammer in his right hand with a bundle of plugs and oakum suspended from his shoulder. The carpenter's mate is shown in the foreground next to him, stepping over a coil of rope with his back to the viewer. Beyond them, in the left background, a wounded midshipman is carried below deck by two sailors.

Painted two years after the event, this complex painting concentrates on the human response of the men involved in this important event in the life of the nation. The drama draws on the narrative of Renaissance religious imagery. It evokes a pieta, or lamentation, with the dying Nelson laid out on the deck. Using Christian imagery, the artist invites such comparison by, for example, showing blood on Nelson and replacing the base of the cross with a stanchion, thus elevating the scene to that of Christ. Nelson is bathed in a golden light in contrast with the gloom of the rest of the deck and the scene is intentionally framed by the curve of the bulkhead and the swathe of curtain top right. It intentionally concentrates on the tragedy of the moment to evoke a response from the viewer.

The picture was painted for John McArthur as a plate for the biography he wrote with James Stanier Clarke, 'The Life of Admiral Lord Nelson, KB', 1809, and was engraved by R. Goulding. It is one of two by West (the other being 'The Immortality of Nelson', BHC2905) and five by Richard Westall, all for this project, which were presented to Greenwich Hospital with Lemuel Abbott's best-known portrait of Nelson (BHC2889) 'by Jasper de St Croix, Esq., and several other patriotic individuals' in 1849.

Born in Pennsylvania, West began his artistic career painting portraits but soon moved to historical subjects. He moved to Philadelphia in 1756 and in 1760 he travelled to Italy to copy Old Master paintings. He arrived in England in 1763 and became historical painter to George III in 1771. In the same year he achieved wide acclaim for his painting 'The Death of General Wolfe', by placing the figures in modern dress and thus applying a new realism to history painting. West believed that historical accuracy was less important than immortalizing his subject in a heroic pose. Concerned too with the movements of Neo-Classical and Romantic idealism, he was one of the founders of the Royal Academy and became its second President, on the death of Sir Joshua Reynolds 1792. He retained this commanding and influential position until he offended George III by visiting Napoleon in Paris in 1802. Later he gained great popular acclaim with his large painting of the 'Death of Nelson' 1806, showing the fall of Nelson on the quarter deck of the 'Victory'. The painting is signed and dated, 'B.West 1808'.
Back to Search Results
Buy a print License an image
Share:
Link copied to your clipboard!