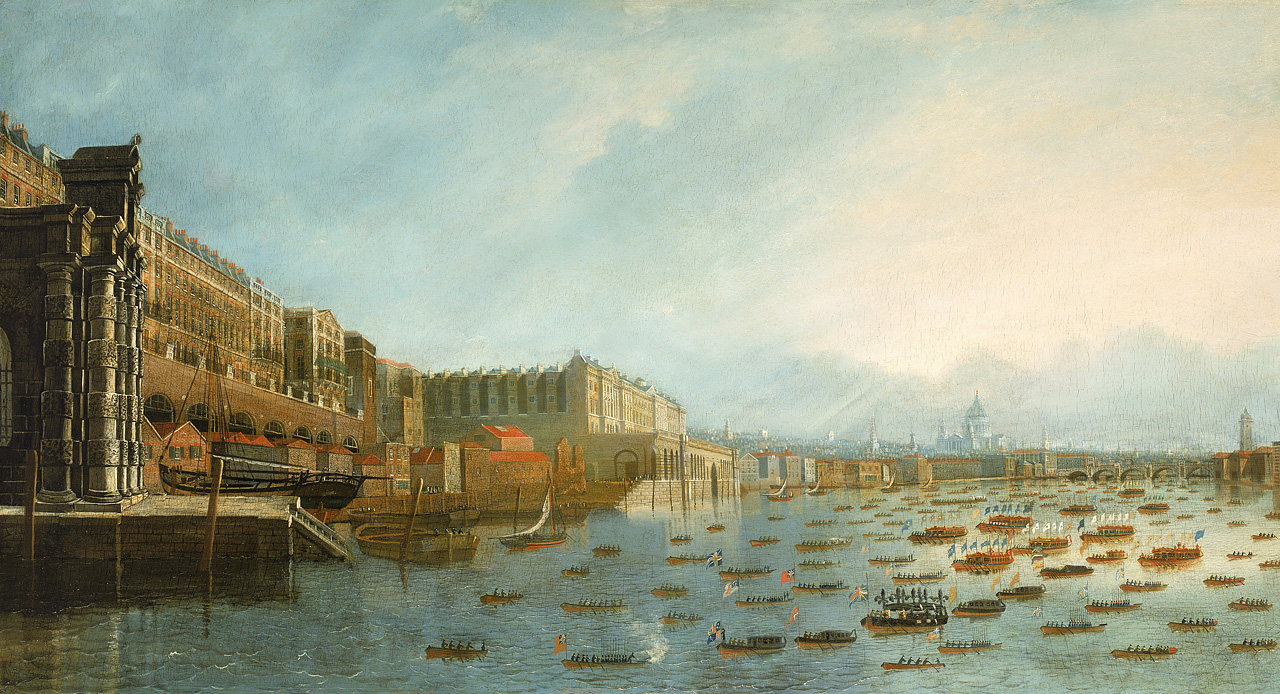 A panoramic view showing the funeral procession of Lord Nelson on the River Thames, to the Admiralty in Whitehall, after his lying in state at the Royal Hospital for Seamen at Greenwich. His body was placed inside four coffins. The inner one was of wood from the mainmast of the French flagship 'L'Orient', destroyed at the Battle of the Nile (1798). This was cased in lead with an outer wooden coffin, the whole having lain in state in a gilt outer casket designed by the Ackermann brothers. Thus enclosed the body was carried from Greenwich to Whitehall Stairs on a black-canopied funeral barge and was accompanied by over sixty boats including the barge of the Lord Mayor, admiralty and city livery barges.

The river procession is clearly shown in the painting, with the black plumes marking out the funeral barge. Boats of the Sea Fencibles, a corps of naval coastal defence reserves, lined the route and are shown in the painting flying red ensigns and firing minute guns. The coffin lay in the Admiralty overnight before the funeral and interment at St Paul's Cathedral on 9 January 1806. Thousands lined the streets to see the vast funeral procession, centred on the spectacular funeral car bearing the coffin, and the cavalcade was so long that the head reached St Paul's before the tail left the Admiralty.

The painting looks down river, with the dome of St Paul's visible on the northern bank in the distance, amid spires of the City churches. The York Watergate (now landlocked in the public gardens by Embankment underground station) dominates the left foreground of the painting with the arched vaults of the Adelphi visible beyond. In front of the Adelphi, a large development off the Strand built by Robert Adam in 1774, are the subterranean streets and wharves leading to the river. The view along the north, or Middlesex, bank is foreshortened, with Somerset House positioned beyond.

The sky above St Paul's is shown bathed in light, a device used by the artist to enhance the symbolic effect, although an eyewitness account referred to a violent cloudburst as the coffin reached Whitehall Stairs. Blackfriars Bridge spans the river with Watt's Shot Tower clearly identifiable on the right or Surrey bank. Architectural detailing has been closely observed but the perspective of the painting is inaccurate and the overall effect is highly stylise
Back to Search Results
Buy a print License an image
Share:
Link copied to your clipboard!