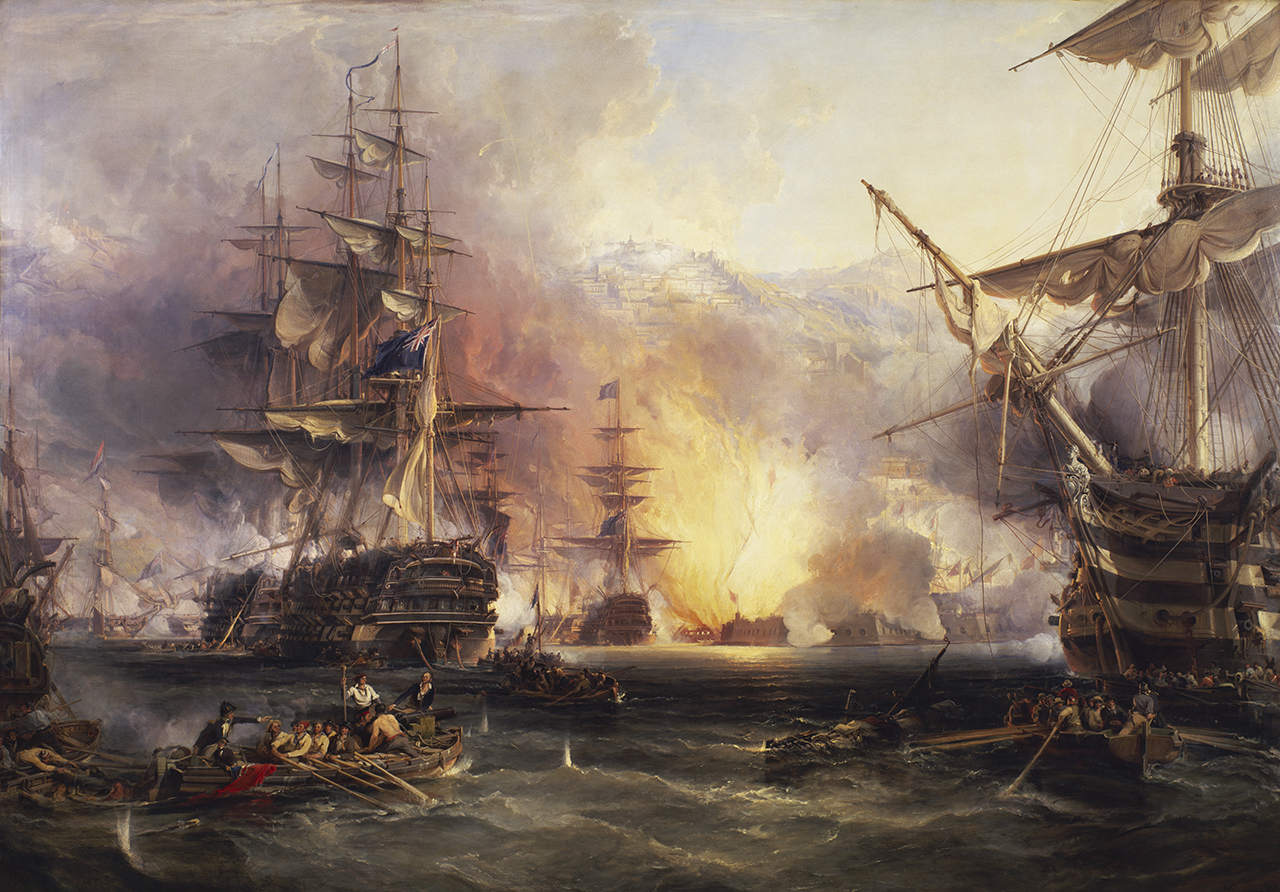 In 1816 a squadron under Admiral Sir Edward Pellew was fitted out and sent to Algiers where they arrived, in company with a small Dutch squadron, on 27 August 1816. They sought the release of the British Consul, who had been detained, and over 1000 Christian slaves, many being seamen taken by the Algerines. When they received no reply the fleet bombarded Algiers in the most spectacular of several similar punitive actions of this period that finally broke the power of the 'Barbary pirates', who had been a plague on European commerce in the Mediterranean for centuries. Pellew was subsequently created Viscount Exmouth.

In the foreground of the painting is a barge with a howitzer in the bows and a lieutenant standing at her tiller. To the left of her are two boats, one sunk and the other with sailors rescuing the crew. In the right foreground is a fallen spar and another barge with a carronade in her bow. Beyond her more boats are sheltering under the 'Impregnable', 98 guns, the fore part of whose bow is in the picture. In the left middle distance there are three more boats under the stern of the 'Minden', 74 guns, one of which is about to fire a Congreve rocket. The 'Minden', in port-quarter view, is firing her starboard guns, and partly masks the 'Superb' also in port-quarter view. More boats are sheltering under the port side of their hulls. In the left background can be seen the forepart of the Dutch flagship 'Melampus', 40 guns, in starboard-broadside view and ahead of her the stern of a British frigate. In the middle and right background is the 'Queen Charlotte', 100 guns, in port-quarter view, flying Pellew's blue admiral's flag at the main, and a glimpse of the 'Leander', 50 guns, ahead of her. They are engaged with the batteries of the harbour, engulfed in flame, and the ships burning within it. Above the smoke Algiers can be seen rising up the hills behind.

All Exmouth's aims in the action were achieved: 1083 Christian slaves and the British Consul were liberated, massive restitution paid and peace made between Algiers and the Dutch. Exmouth was raised to a viscountcy and several of his friends and associates, who wanted to commemorate the bombardment, subscribed 200 guineas to commission the artist to paint the event for inclusion in the Naval Gallery at Greenwich Hospital. E. H. Locker, Secretary and Commissioner of the Hospital was a key figure in the matter both because he had been secretary to Pellew, 1804-14, and because he had already (in 1835) commissioned a copy of Benjamin West's 'Battle of La Hogue, 1692' for the Gallery from Chambers, whose most important late work this is.

The artist went to Plymouth to sketch the men-of-war in the production of this painting and the Museum also has a number of the preliminary drawings for it and a freely painted oil study (BHC0615). The finished painting was exhibited in 1837 at the British Institution, as painted for the Hospital, before being put on permanent display in the Naval Gallery there.
Back to Search Results
Buy a print License an image
Share:
Link copied to your clipboard!