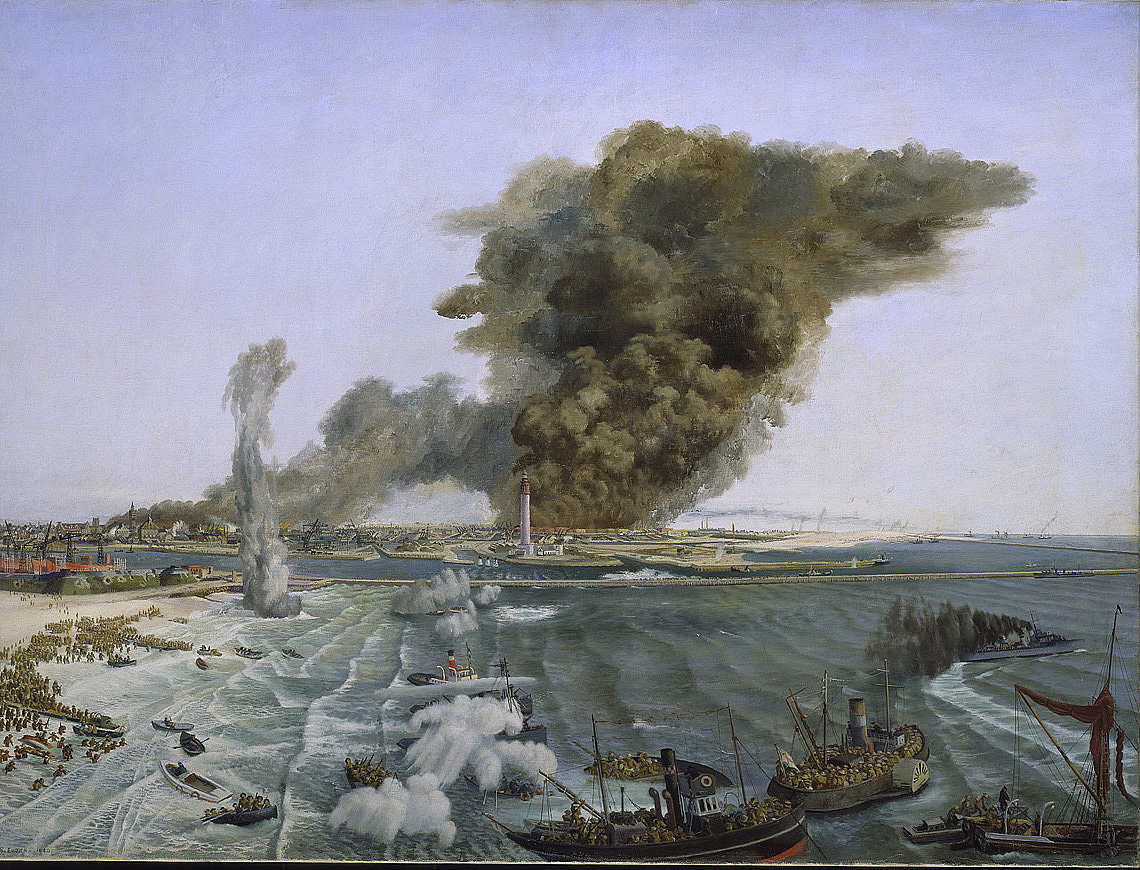 One of a group of 11 oil paintings by Eurich, an official war artist, allocated to the National Maritime Museum after World War II. The image was used by the Navy as its Christmas card for 1940, and refers to the action between 20 May and 4 June that summer, when 366,162 men of the British Expeditionary Force and Allied forces were evacuated to England under difficult conditions. The port of Dunkirk and the two moles, or large jetties that pointed out seawards, were the main evacuation points, although many were also taken off the beaches west and north of the town. The evacuation was hindered by aircraft attacks and the shellfire from German artillery positions.

The painting is panoramic in effect as if viewed through a wide-angle lens or from the perspective of a low-flying aircraft. It shows the evacuation occurring amidst the heavy German bombardment in Dunkirk Harbour. Its docks, jetties and the town with the Church of St Eloi and Hôtel de Ville are all visible. In the centre a large pall of smoke from bombed oil tanks dominates the skyline, dark and angry against the blue sky as it spreads upwards and outwards, suggesting brutal destruction against a background of calm beauty. There is a smaller trail of smoke from the burning town while other smoke in the sky indicates bombs landing, aircraft, or naval craft.

The long sea wall slashes horizontally across the centre of the picture from the East Mole, marks one of the main evacuation points. On the beach in the left foreground, lines of troops, await rescue, under fire from aircraft. Long queues of soldiers snake down to the water's edge, where there was a scramble to get on to the small boats. Some heeled over as too many men tried to clamber aboard on the same side of the boat, while others capsized under the sheer weight. A variety of small vessels came close in shore to carry the troops out to the larger shipping outside the harbour, and in the centre one has sunk, either by bombing or being overloaded. A paddle steamer laden with troops moves towards the naval vessel on the right and in the foreground to the far right, troops can be seen climbing on to a fishing craft with its red sail furled.

Painted in Southampton, and full of minute detail, this work was not an eyewitness account, but was reconstructed using a combination of notes, sketches made the previous summer, on-the-spot accounts, and a few photographs. The work is meticulously and highly finished, a tribute to emotional intensity, and demonstrates the artist's love of narrative incident. Eurich wrote that 'the traditional sea-painting of van de Velde and Turner should be carried on to enrich and record our heritage'. He created a companion piece 'Dunkirk Beaches, May 1940', now in the National Gallery of Canada. Another war artist, Charles Cundall also produced a commissioned work on this subject, 'The Withdrawal from Dunkirk, June 1940'.
Back to Search Results
Buy a print License an image
Share:
Link copied to your clipboard!