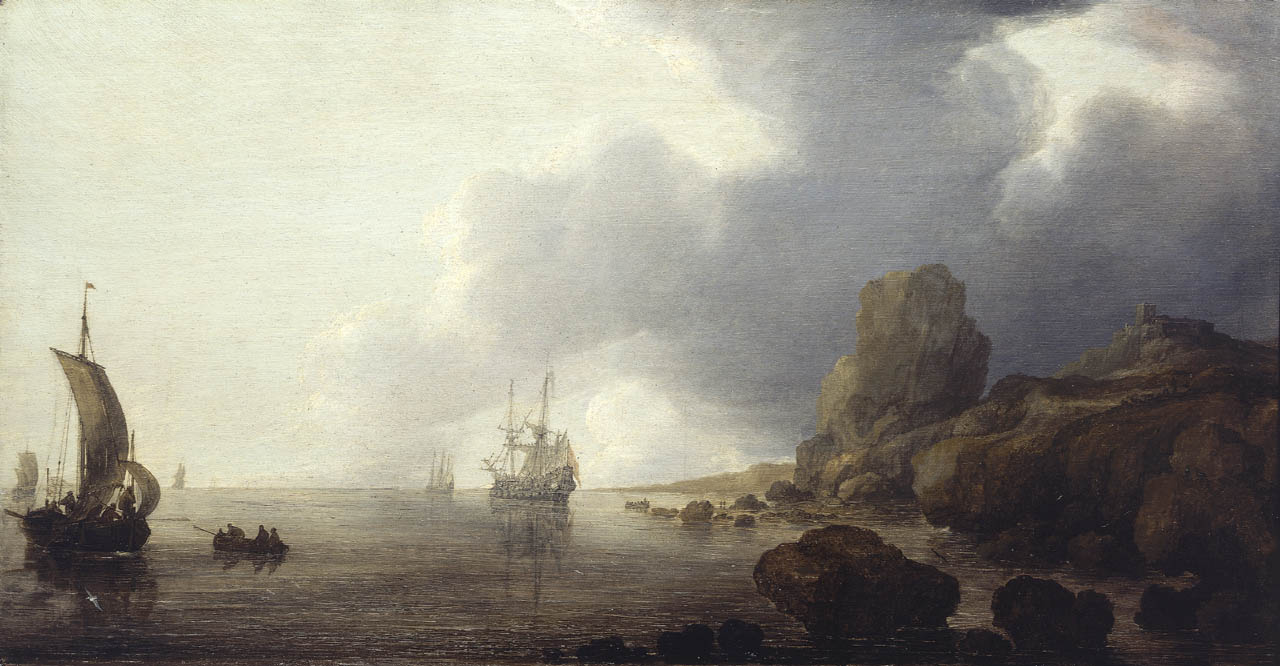 Ships Becalmed on a Rocky Coast

An early work depicting shipping, on a calm sea, in a bay. A small fishing pink, in starboard-bow view, glides into the scene from the left. Several figures are shown on board. Next to it a little boat, in which three men are seated, is rowed towards the land on the right. In the distance, several other vessels, including a large Dutch man-of-war, float peacefully in the tranquil, shallow water. This large vessel has launched a small boat and is landing a group of figures, while others stand nearby. The landscape is romanticized and idealized, with a castle on the top of an outcrop of rock to the right. The clearly delineated reflection of the ship emphasizes the calm and almost surreal quality of the painting. In this dreamlike world several figures tend a flock of goats and two birds, perhaps cormorants, are positioned on a rock on the far right. In this depiction devoid of forcible waves or strenuous winds, the rocks and cliffs are perceived as graceful geological structures. De Vlieger’s fascination with the accurate and realistic portrayal of nature is clearly evident in this work. As with de Vlieger’s related paintings (BHC0779 and BHC0776), the composition is illuminated from its centre. Light radiates, from a point on the horizon, where the land meets the sea. In this work, the artist has captured effectively the pure, unflinching stillness of the water. The sky, too, is relatively still. However an accumulation of dark clouds rolls out of the painting on the right. Quietness appears to emanate from the panel.

Often contemporary writers perceived this type of beatific tranquillity as both aftermath and antithesis of tempest or storm. Constantijn Huygens described supremely calm waters after a storm as an ideal state, ‘. . . worn by the rough seas of Holland / Labours of the Holland’s Deep. / Like a top, the toy of children / Gazed on, whirled and spun to stillness, / In its balance finds its rest …' So, even though, de Vlieger’s seascape could scarcely be more placid. Some of the visual elements within the composition are associated traditionally with imagery of shipwreck and tempest such as the fortress at the top of the cliffs on the right. Various contemporary paintings of shipwrecks (BHC0837 and BHC0842) used the motif of a castle or tower, atop a precipitous coast, to allude to a point of salvation. Similarly the dark, scabrous rocks, in the foreground, on the right, are not generally the preserve of the calm seascape but rather a mainstay of shipwreck pictures, confronting ships and sailors with danger and menace. Though bearing a very faint date of 1632, the painting’s wide vista, spatially grand composition and its subtle, vaporous sky are strikingly similar to those depicted by de Vlieger in 'Beach View', 1643, in the Mauritshuis, The Hague. The close resemblance between the two paintings suggests that they were produced about the same time. Moreover the Greenwich painting may date to the 1640s rather than the perceived date of 1632.

Simon de Vlieger was born in Rotterdam in around 1600. He was an important early painter in the emerging discipline of marine art. In 1634, he became a member of the Delft Guild of Painters and, by 1638, was in Amsterdam. He settled in nearby Weesp and remained there for the rest of his life. De Vlieger influenced the direction of Dutch marine art decisively during the 1630s and 1640s. Significantly, as the pupil of Jan Porcellis and the master of Willem van de Velde the Younger, he provided a bridge between the second generation of Dutch marine painters and the third. He demonstrated his versatility and technical accomplishment by painting a wide variety of marine subjects and was a sophisticated early exponent of the Dutch realist tradition. He moved away from a monochrome palette towards a silvery tonality and demonstrated a closely observed knowledge of shipping. He, also, painted figural representations for churches, genre scenes and landscapes and was an etcher. De Vlieger died in the coastal town of Weesp early in 1653. The painting is signed 'VLIEGER'.
Back to Search Results
Buy a print License an image
Share:
Link copied to your clipboard!