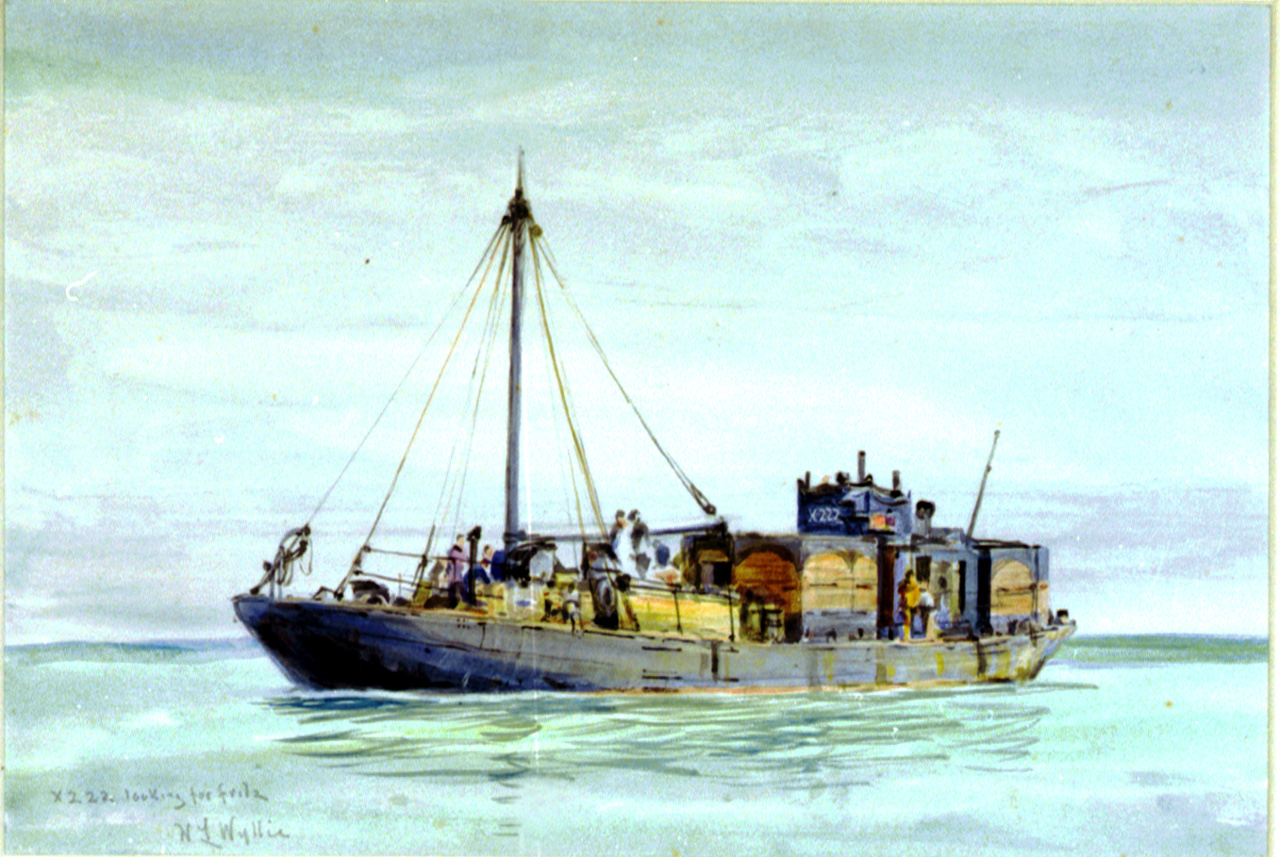 Inscribed 'X222. Looking for Fritz' by the artist, in pencil lower left. This drawing was reproduced (in black and white and before the pencil inscription was added), under the title quoted above, in Wyllie's co-authored book 'More Sea Fights of the Great War' (1919) f. p. 94. The original X-lighters (X1 - X200) were designed as landing craft for the Dardanelles campaign and were built in 1915. A small later group (X201 - X225) were launched between June and September 1916 and were built as stores lighters - though Wyllie's text says for landings that did not take place in north Germany. 'X222' was built by the Sunderland Shipbuilding Co. (yard no. 311) as a twin-screw cargo carrier and she was used for a short time as a submarine decoy vessel (Q-ship). This is how Wyllie shows her and the apparent large packing crates on deck would have concealed her armament, the sides folding down once a submarine had been lured close enough on the surface to be attacked. There is a very good description of her in this role in 'More Sea Fights', pp. 94-95, based on the fact that - apparently, from the book's preface- he himself made a short cruise on her in the Channel with her 'motley crew' under an unnamed former captain of the White Star line. She was useful in shallow waters, made about 6 knots and her 'happy hunting ground' is there stated to have been 'off the bar harbours of Etaples, St Valery sur Somme and Treport', though she also protected night convoys between Newhaven, Dieppe and Le Havre. In 1922 she was sold to merchant use and converted as a London-registered motor barge under the name 'Tower Bridge' for C. Shaw Lovell & Co. Ltd. She was renamed 'Plymouth Trader' in 1933 for Plymouth Coasters Ltd and was hired back by the Admiralty in August 1939 for conversion to a cable depot ship, but then laid up from July 1942 to 1945. Bought by a Finnish company in 1947 she was again renamed as 'Tuula', then 'Marja-Liisa' in 1951 and 'Klara' in 1959. In 1989 she was converted to a ro-ro ferry by the addition of a bow ramp and was still listed in Lloyd's Register for 2009-10, apparently also still with her original Bolinder engines, but with no owner, no port of registry and no flag given. She does not appear under any of her names in the 'International Register of Historic Ships' (1999 ed.) and whether she is still either afloat or in existence is not currently known (2013).
Back to Search Results
Buy a print License an image
Share:
Link copied to your clipboard!