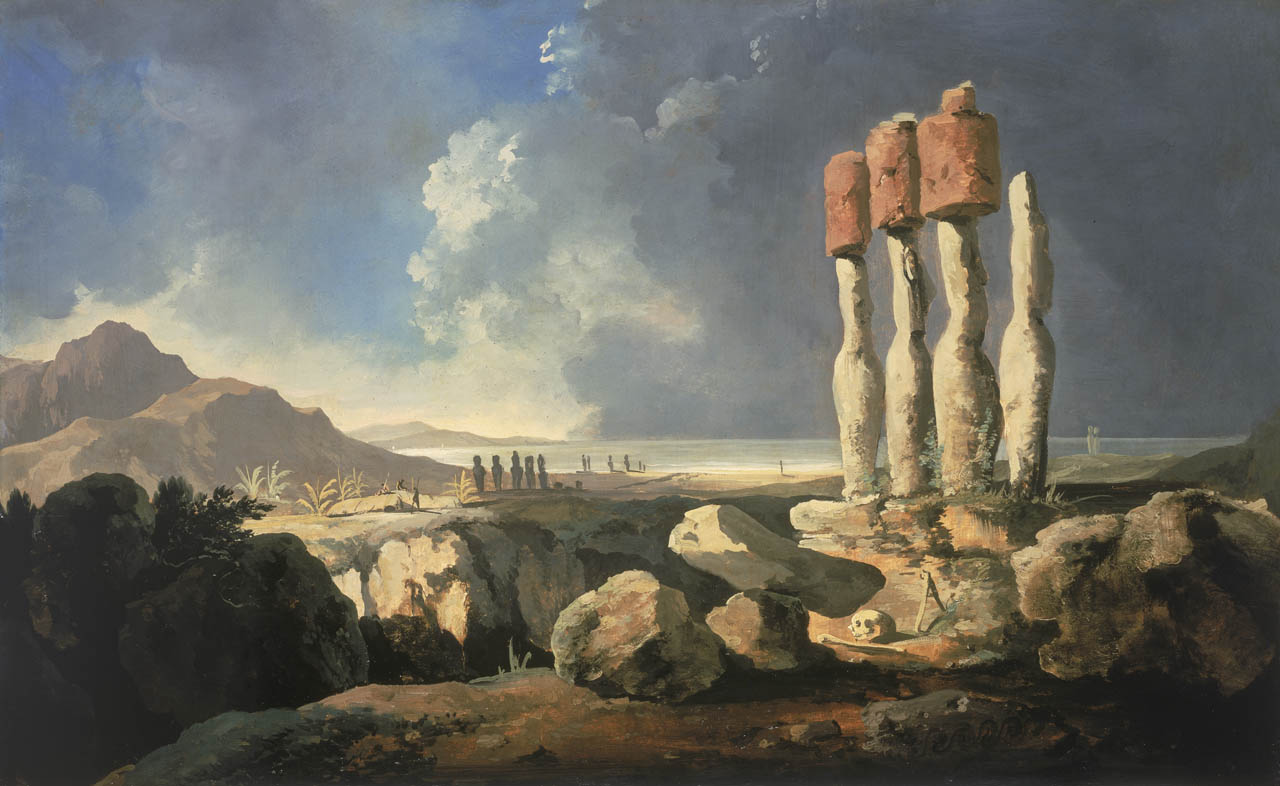 'A View of the Monuments of Easter Island [Rapanui]'

Cook's main purpose on this expedition was to locate, if possible, the much talked-of but unknown Southern Continent and further expand knowledge of the central Pacific islands, in which Hodges' records of coastal profiles were in part important for navigational reasons. Hodges was sent ashore at Easter Island from 14 to17 March 1774, to record and observe. None of his Easter Island drawings exist, but later engravings suggest some were made. The whole party was struck by the beauty and strangeness of the island and its monuments.

In this dramatic landscape, Hodges shows hills on the left and the sea in the distance. Several inhabitants of the island are visible in the middle distance. Squally weather conditions heighten the dramatic mood and dark clouds on the right provide a powerful backdrop to the four highlighted stone figures standing starkly on a stone platform, looking seawards towards Vinapu Bay. One of the stone figures has lost its hat. J. R. Forster, the expedition's botanist, wrote: 'The images represent Men to their waist, the Ears are large and they are about 18 foot high and 5 foot wide; they are ill-shaped and have a large solid bonnet on their heads.' In the foreground are fallen rocks and a dark chasm to the left. The unusual figures introduce a frisson of mystery and the unknown to the interpretation of the painting. Beneath the statues in the foreground Hodges has depicted a bone, skull and a surveyor's instrument, possibly a quadrant, used to measure the upright statues by the expedition astronomer William Wales. Hodges suggests a continuous human link from the ancient to the modern, combined with the sublime terror of the unknown.

Written accounts indicate that the carefully composed pictorial elements represent an amalgamation of observations and experiences from the visit. This emphasis upon light, air and colour combined with the absence of classicising and literary elements of the larger post-voyage paintings has led to suggestions that it was painted on the voyage, and as a pair with another same-size panel painting of a 'View in the Province of Oparree [Pare]' (BHC1936). If that is the case, however, they were almost certainly done late in the voyage on the way home from Cape Town and on the basis that Hodges had been able to replenish his paint stock there, since there is evidence that by the time he reached Easter Island he no longer had sufficient materials for the colourful and liquid handling of paint which is so evident in both pictures. More recent evidence suggests that they were probably painted in London in 1776-77, and that their breadth of handling and brightness is more accountable to being designed as overdoor paintings, necessarily seen at a distance.
Back to Search Results
Buy a print License an image
Share:
Link copied to your clipboard!