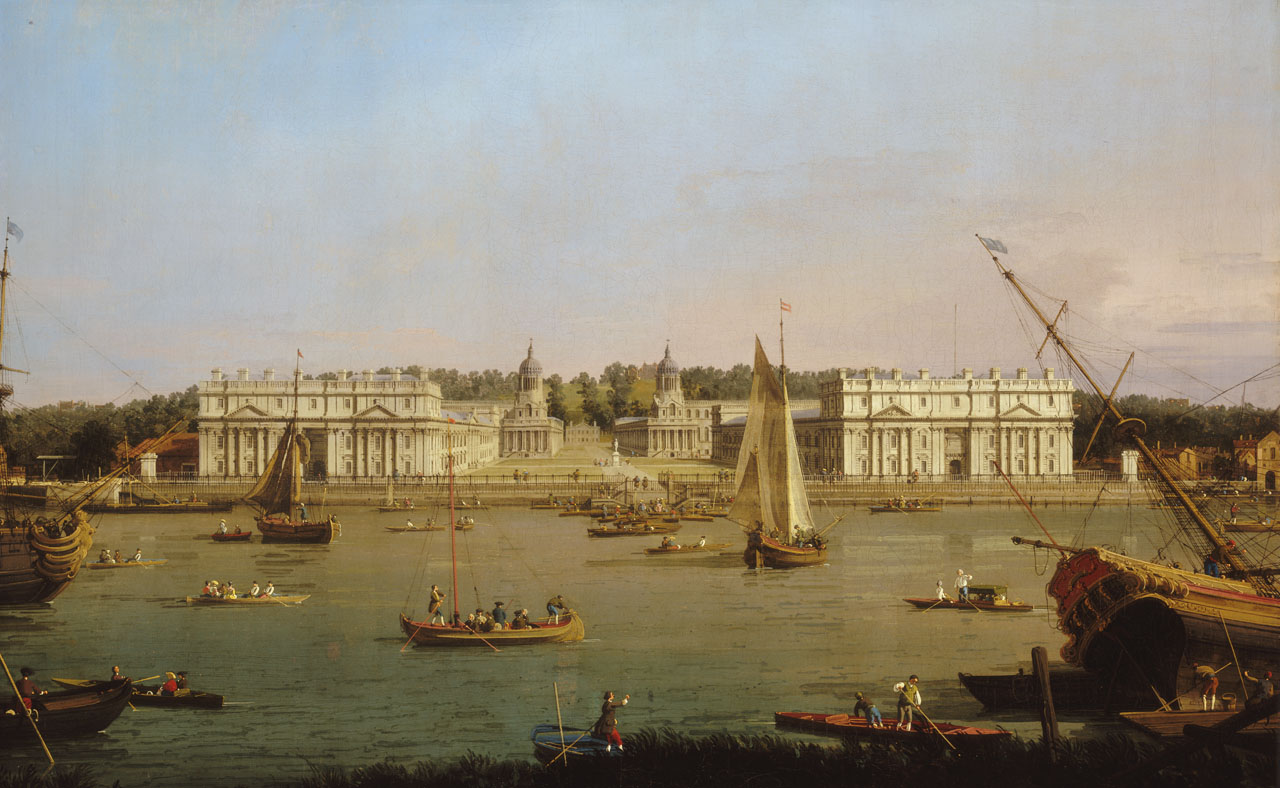 Greenwich Hospital from the north bank of the Thames

Little is known about this view of Greenwich Hospital from the Isle of Dogs, which may have been commissioned by Consul Joseph Smith for his residence on the Grand Canal. He was British Consul in Venice from 1744 to 1760, where he entertained many English Grand Tourists.

Canaletto worked in England from 1746 to late 1755, except for an eight-month return to Venice from late 1750 to August 1751. This view may have been painted about 1752, perhaps to mark the Hospital's completion in the previous year. However, it was also suggested long ago, and more recently repeated by Charles Beddington in 'Canaletto in England' (exh. cat. 2006, p. 50, no.1), that the style indicates a date around or before 1750. The Hospital was certainly externally complete then, or sufficiently so, and that would also fit with the possibility of Canaletto painting it for Smith and perhaps taking it with him on his temporary return to Venice, or even doing it there. He painted two other views of it, one now lost. The other - on loan to Tate Britain from a private collection - is closely based on a print published in Paris by Jacques Rigaud in 1736, of which the Museum has what appears to be Rigaud's original drawing (PAH8381). The Tate version is certainly the earlier one, probably painted before Canaletto saw Greenwich himself and almost certainly in Italy. It has many of the same fanciful details of Rigaud's printed version and the same high, perspectivist's viewpoint, well above river-bank level and typical of many prints made before the Hospital was completed. The present version takes a more realistic low viewpoint and although still not literally accurate is much more so, arguing some better, later knowledge of the site, which Canaletto would have visited from 1746 on: given its artistic celebrity after Thornhill had completed the ceiling of the Hospital's Painted Hall in 1712, it is inconceivable that he did not.

Inigo Jones's Queen's House (1616 - c.1638) is in the centre of the picture, with the Royal Observatory on the hill in Greenwich Park above it. (By contrast, it is notable that both in Rigaud's print and the Tate version the distinctive Observatory is reduced to an indeterminate Italianate group of buildings lost in trees.) Rysbrack's statue of George II (1735) is visible in the centre of the Grand Square of the Hospital, behind the central water-stairs, and figures parade the riverfront Five-Foot Walk, opened to public use in 1731.

In neither version of the scene does Canaletto represent the raised upper level of the Grand Square, between the domed Queen Mary Court on the left (1735-51), holding the Chapel and, on the right, the King William Court (1698 -1712), which holds the Painted Hall. The step arrangements up to the dome vestibules are also derived from prints, not as built. The solid stone supporting drums immediately below both domes are both also omitted, together with the clock and wind-dial faces which they in fact bear. On the riverfront the Queen Anne Court (1699-1748) stands on the left and the King Charles Court (1664-1715) on the right. The accurate inclusion of only one carved entablature, in the east pediment of the King Charles Court, and of the Hospital crane at the left end of the Five-Foot Walk are among details suggesting personal knowledge of the site. (The Rigaud print and the Tate version show all pediments as bearing carving and no crane.)

The painting contains other detailing typical of Canaletto's work. The symmetry of the classical façade is counterbalanced by the asymmetric lines of the shipping in the foreground. A variety of craft, including Thames skiffs, has been portrayed on the river but Canaletto also uses the visual devices of his Venetian Grand Canal paintings, such as oars, poles and sticks, while some of the shipping is fanciful and formulaic, such as the vessel heeled over in the right foreground. He has also opened up the central vista and darkened the foreground to accentuate the light on the building. Light and shade carefully articulate the details of brick, stone and foliage in this atmospheric image.
Back to Search Results
Buy a print License an image
Share:
Link copied to your clipboard!