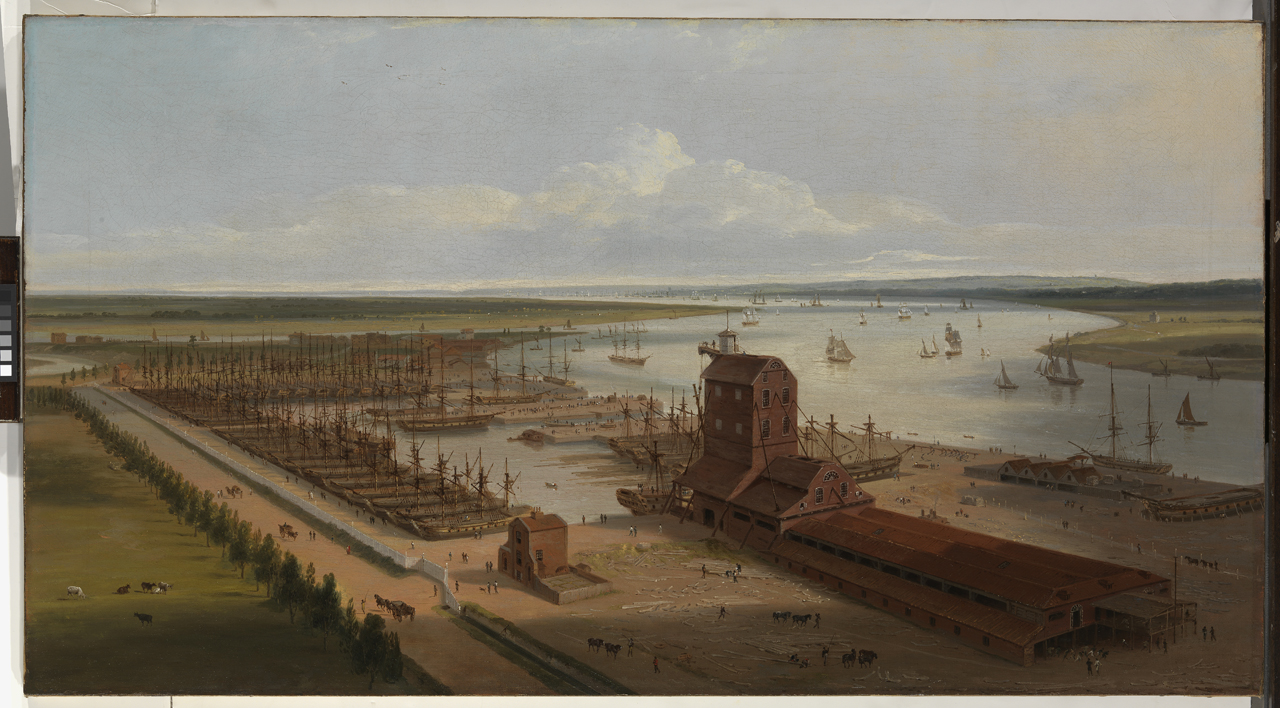 The Mast House and Brunswick Dock at Blackwall

A bird's-eye view of the Brunswick Dock (also known as the Brunswick Basin or Perry's Dock) and part of Perry, Wells & Green's Blackwall shipyard, looking down the Thames towards Woolwich. The tip of Greenwich marshes (Blackwall Point) is on the right and the River Lea in the left distance.

The Blackwall mast house in the foreground (built 1793, removed 1862) was a crane for masting ships, rather than using a floating sheer-hulk - the usual naval practice. Two men can be seen working a hoist, with a mast suspended, on the top of the tower. The lower range of the building, also used for storing sails and rigging, was where masts were made and stored and they could be drawn up directly from inside by the hoist, for placing in ships, or vice versa. Horses are being used in the yard below it to move shipbuilding timber. There are East Indiamen moored up in lines to the left and centre of the picture and the river is depicted as the principal highway. It is busier than the tree-lined road, with many coastal and other craft.

The Brunswick Dock was built by John Perry, adjacent to his shipyard at Blackwall, to the design of the civil engineer John Powsey (c. 1734-1799), District Surveyor for Wapping and Limehouse, between March 1789 and November 1790, when it opened. It had two basins of above eight acres in all, one (the nearer in this picture) capable of holding thirty large East Indiamen and the other a similar number of smaller vessels. Each had separate entrances. In 1806 the dock was bought by the East India Dock Co., formed for the purpose, and became the East India Export Dock. By 1808 they had constructed an Import Dock where cows are shown grazing here, to the left of the road, with a separate entrance beyond Perry's basin. In the 1820s managing interest in the Blackwall shipyard transferred to Perry's son-in-law, George Green, whose son Richard made it famous as the home of 'Blackwall frigates', the last development of large Indiamen, and of Green's Blackwall line trading to both India and Australia, especially after gold was discovered in Port Phillip (Victoria) in 1852.

This painting replicates, or may be the source of, a print engraved and published by Daniell in 1803 (see PAI7125). The print was dedicated to John Perry who retired in that year. Shortly afterwads Robert Wigram became a partner and the firm became 'Wigram, Wells & Green' until 1813, and thereafter 'Wigram & Green'.
Back to Search Results
Buy a print License an image
Share:
Link copied to your clipboard!