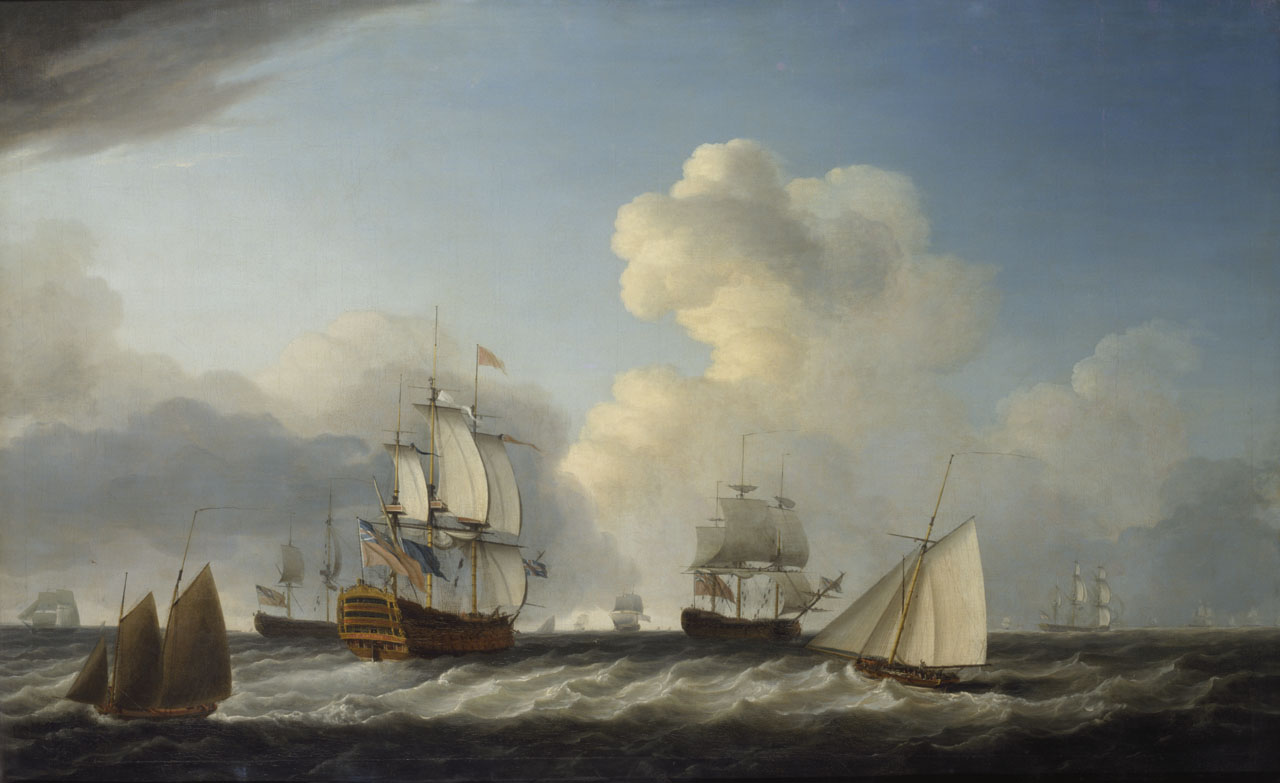 The 'St George' with other vessels

The 98-gun, second-rate three-decker, 'St George', is shown here under easy sail with two other large vessels beyond her in the middle distance. Many other ships are visible in the distance, across the width of the picture. The wind is blowing from viewer's left, raising a choppy sea under a striking cloudscape, which takes up much of the canvas above the low-set sea horizon, probably intended as the English Channel. The 'St George' is seen in starboard-quarter view under topsails and fore-course, as is the ship to her right. The foremast of the ship on the left cannot be seen but her canvas otherwise conforms with the other two. All three have their main courses loose at the bunt and ready to let go, with figures in the rigging, especially of the ship on the right. The 'St George' flies the flag if a vice-admiral of the red at the fore and she and her consort to the right fly Union jacks at the bow. All three ships fly red ensigns but the 'St George' has hers flying alongside a blue one and a seaman standing at her main-topmast head who is holding out a white swallowtail pendant. Alongside him a shipmate is standing on the topmast cap. Another seaman clinging to the starboard fore-topsail yardarm similarly holds out a red swallowtail pendant. This unusual combination of flags and the crowded cutter approaching in the right centre foreground, suggests this may be a scene of welcome, with 'St George' about to shift her colours on the arrival of a new flag-officer. The cutter is in port view from abaft the beam, close-hauled on the port tack. She flies a naval pendant and a waving figure stands above the crowd in her, silhouetted against the foot of the mainsail. In the left foreground a gaff-rigged schooner, in port view, close-hauled on the starboard tack and flying a naval pendant, is sailing out of the composition.

The 'St George' was launched at Portsmouth Dockyard in 1785. She served at the siege of Toulon in 1793 and was Nelson's flagship in the Copenhagen campaign of 1801, although (because of her draught) he shifted his flag into the smaller 'Elephant' for the Battle of Copenhagen itself. In 1811, while flagship in the Baltic, the 'St George' was driven ashore and dismasted on Zealand but was refloated. She then sailed for England under jury rig and rudder but, on the way, another storm wrecked her on the North Sea coast of Jutland, Denmark, on Christmas Eve of that year with the loss of all but six of her crew.

Serres was a well-born Frenchman from Gascony who ran away to sea in merchant service rather than follow family wish that he enter the Church. He probably arrived in England as a naval prisoner of war, took up painting and settled there. His early paintings show the influence of Brooking and Monamy's interpretations of Dutch art but he rapidly achieved recognition for his more documentary visual accounts of sea actions of the Seven Years War, 1756-63, becoming established as England's leading marine painter. His work was even more in demand in the 1770s and 1780s, recording the naval history of the War of American Independence. In 1768 Serres was a founder member of the Royal Academy and at the end of his life its librarian. A well-respected and sociable man, he was appointed Marine Painter to George III in 1780. The painting is signed and dated, 'D. Serres 1787'.
Back to Search Results
Buy a print License an image
Share:
Link copied to your clipboard!