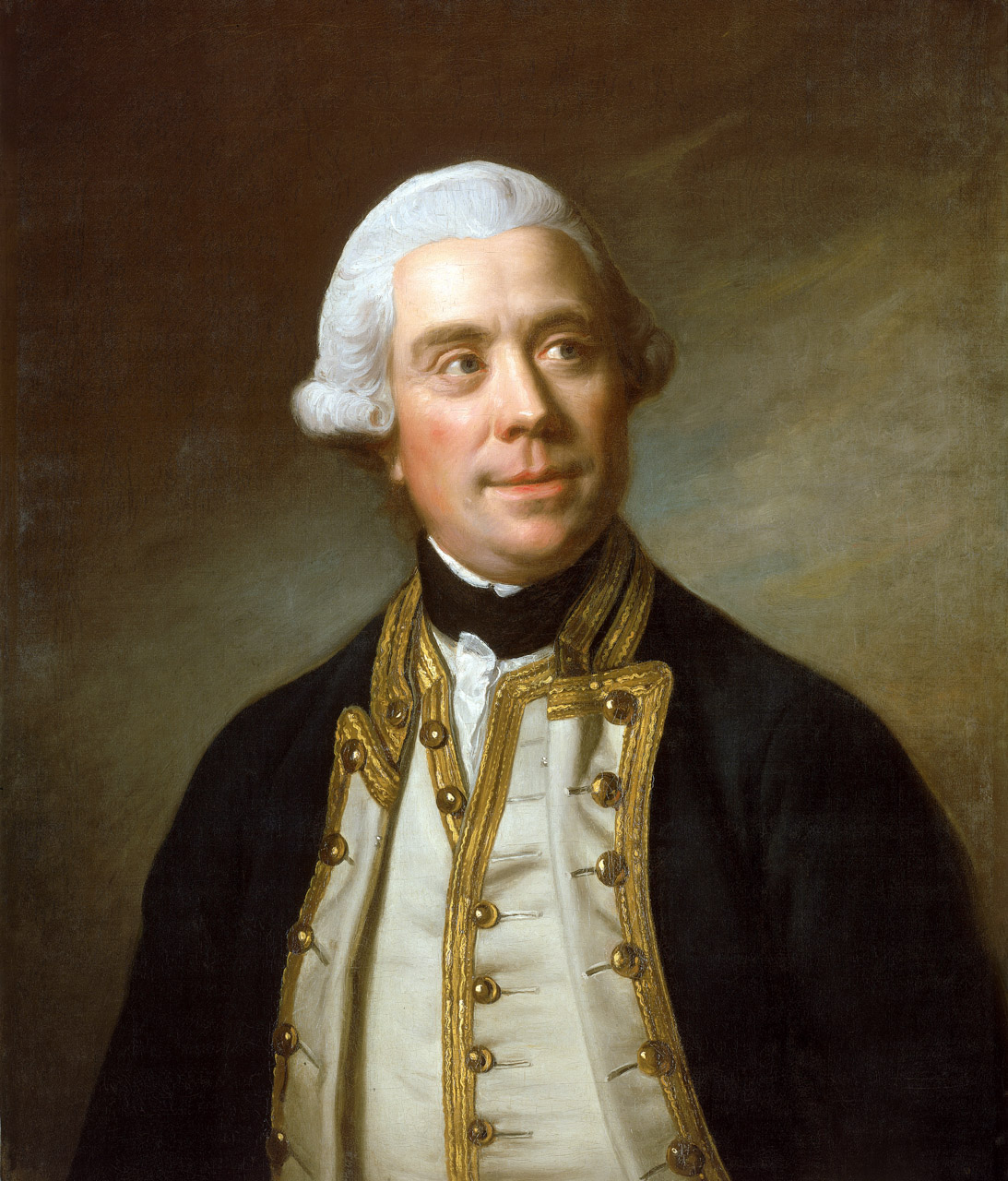 A half-length portrait of Captain the Honourable Samuel Barrington, later Admiral of the White, facing slightly to the right in captain's uniform of 1767-74, consisting of a blue coat with a white waistcoat and gold buttons, and a white half-wig.

Samuel Barrington was the fifth son of John Shute Barrington, first Viscount Barrington (1678–1734). He joined the Navy in 1740, serving in the ‘Lark’ under Lord George Gordon. He passed his lieutenant’s examination on 25 September 1745, gained command of the sloop ‘Weasel’ in early 1747 and became captain of the frigate ‘Bellona’ on 29 May that year before moving to the ‘Romney’. In the Mediterranean, he commanded the frigate ‘Seahorse’; he captained the ‘Crown’ (44 guns) off the Guinea coast and the ‘Norwich’ off North America, 1754–55. From 1757 to 1761 he was captain of the ‘Achilles’ (60 guns) in various actions. In 1762 Barrington moved to the ‘Hero’, 74 guns, in the Channel. With peace in 1763 came unemployment; he was finally appointed to the 36-gun frigate ‘Venus’ in 1768, Barrington becoming flag captain to the duke of Cumberland, who was promoted rear-admiral in the ship. In 1771 he was appointed to the ‘Albion’, 74 guns, in the Channel Fleet. In 1777 he commissioned the ‘Prince of Wales’, 74 guns, and was promoted rear-admiral of the white on 23 January 1778.
Barrington sailed to the West Indies to take command of the Leeward Islands squadron, arriving at Barbados on 20 June 1778. On 14 December 1778, with General James Grant, he launched an assault on St Lucia just as d’Estaing’s French squadron approached. Barrington’s squadron was able to fend off the French force while allowing Grant’s troops to establish their positions. Eventually, the French governor surrendered after d’Estaing withdrew. Barrington was promoted vice-admiral of the blue on 19 March 1779 and clashed with d’Estaing again off Grenada on 6 July and at St Kitts on 22 July that year. He was promoted vice-admiral of the white on 16 September 1781 and raised his flag in the ‘Britannia’ under Lord Howe in the Channel Fleet. He captured much of a French convoy heading for the East Indies on 18 April 1782; and was with Howe at the relief of Gibraltar in October 1782. He struck his flag on 20 February 1783 and was promoted admiral on 24 September 1787.

The artist worked with Pompeo Batoni in Rome, and on his return to London in 1765 achieved success as a portrait and history painter. In 1768, he joined a group of artists who successfully petitioned George III to establish the Royal Academy in that year.
Back to Search Results
Buy a print License an image
Share:
Link copied to your clipboard!