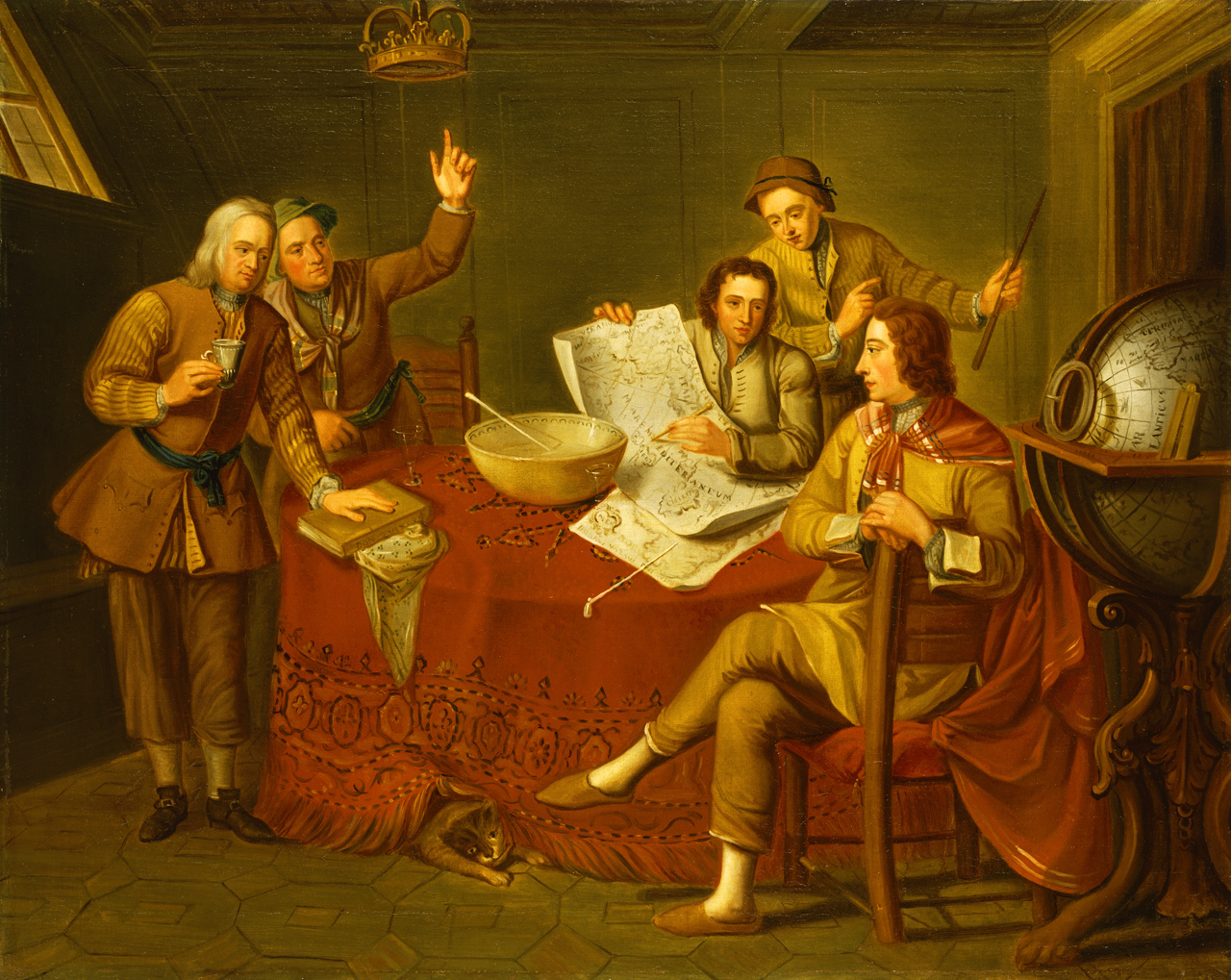 A conversation piece set in the great cabin of the vessel which took Lord Boyne from Venice to Lisbon. Gustavus Hamilton succeeded to the title in 1723 and shortly before coming of age he made the Grand Tour. The original and larger painting, still in the Boyne collection, was probably executed in Venice during this tour, between 1731 and 1732. Although it is a work depicting a group of friends, it may also convey hidden political significance. Lord Boyne is shown as a full-length portrait to left in profile, seated at a table. He sits sideways in the chair, his right arm over the back and his hands clasped. He wears his own red hair and the natural coloured smock and trousers of a sailor, with a red check neckcloth. One of the others in the cabin is believed to be the third Earl of Carlisle, with white hair standing to the left and holding a drinking mug in his left hand. His right hand rests on a volume of 'Don Quixote'. Behind him, pointing at the crown compass hanging from the deckhead is the master of the ship. On the right Sir Francis Dashwood is pointing on a chart to the Straits of Bonifacio, possibly marking a route from Venice to Lisbon on a chart. On his return to London, Sir Francis Dashwood was an influential member of the Hellfire Club. He was also for some time up to his death the administrator of the Irish Customs. Behind him stands another mariner, believed to be Lord Middlesex, who holds a shepherd's pipe. All are dressed in similar fashion to Lord Boyne although the master and Lord Middlesex are wearing caps. They are seated around a table covered with a Turkey cloth on which a large bowl of punch has been placed. In the foreground, Boyne's foot gestures towards a cat coming out from under the table. The presence of the cat in the portrait serves to subvert the image and may invite a particular interpretation of it.

The original painting by Nazari, a Venetian painter, was reputedly such a success that subsequently over 30 replicas were made. This particular version is thought to be an early copy. Hogarth, who knew and painted Boyne, was almost certainly influenced by the picture in his commission to paint the conversation piece 'Captain Lord George Graham (1715-47) in his cabin', in about 1742-44, see BHC2720.
Back to Search Results
Buy a print License an image
Share:
Link copied to your clipboard!