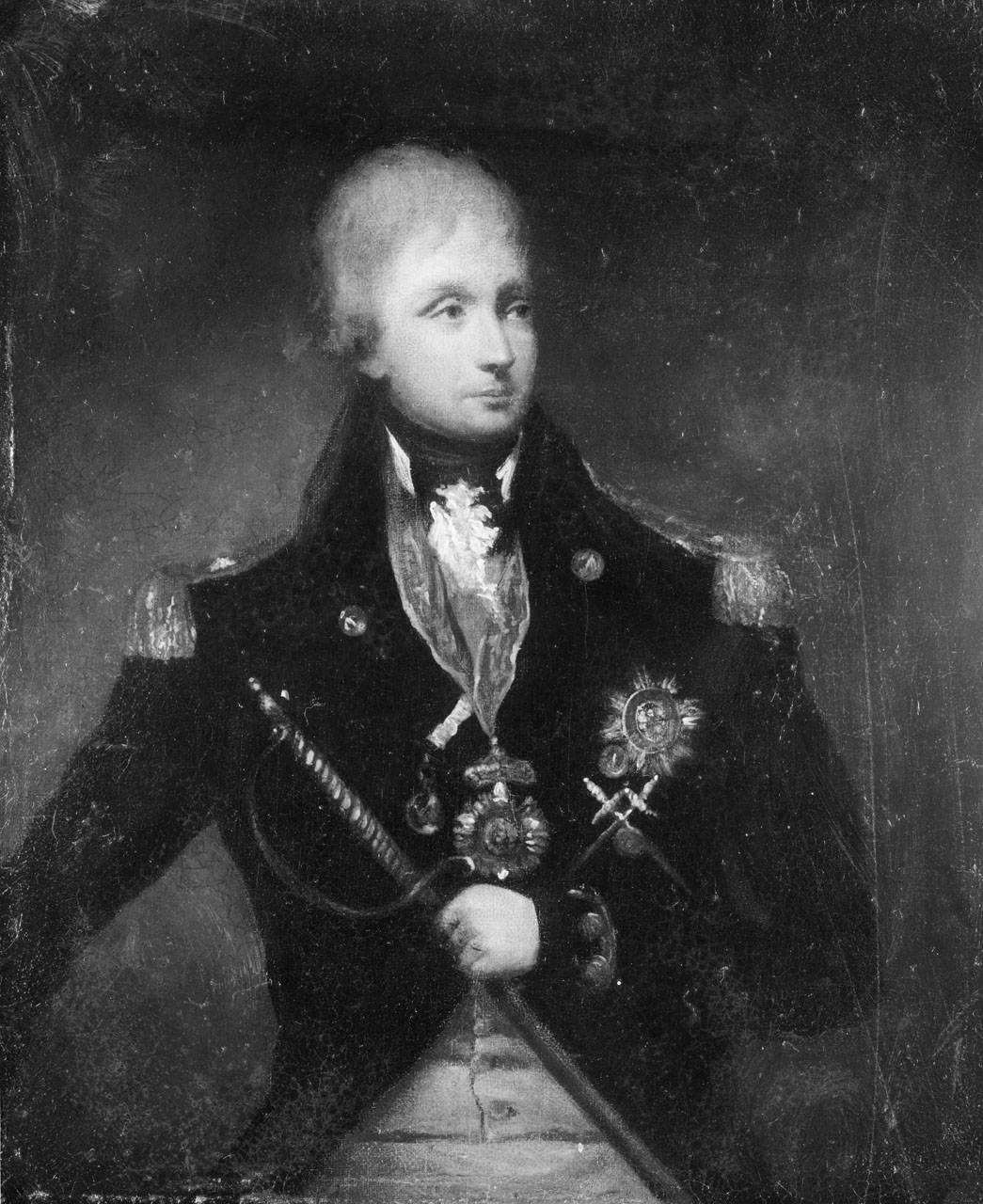 A half-length portrait, slightly to the right, showing Hood in his rear-admiral’s uniform, 1795–1812, wearing the star of the Bath, the star of the Swedish Order of the Sword and the neck decoration of the Sicilian Order of St Ferdinand and of Merit, and his Nile medal; he holds a sword with a very large hilt in his left arm.
Samuel Hood entered the Navy in 1776 in the ‘Courageux’ under his cousin, Samuel (later Lord) Hood. In 1778 he moved to the ‘Robust’, under Alexander Hood (later Lord Bridport), and saw action off Ushant on 27 July that year. He was promoted lieutenant on 11 October 1780 and saw further service and action in the Caribbean and in North America until the end of the war in 1783. He was promoted captain on 24 May 1788, commanding the frigates ‘Thisbe’, 1788–89, and ‘Juno’, 1790–91 and again in 1793–94. After commanding the ‘L’Aigle’, he was moved to the 74-gun ‘Zealous’ in Jervis’s fleet in April 1796 and later took part in the Battle of the Nile, forcing the surrender of the ‘Guerrier’, which was dismasted within twelve minutes. Sent to the Caribbean in Octobet 1802, Hood became commander-in-chief of the Leeward Islands in the ‘Centaur’ following the death of Rear-Admiral Thomas Totty. With the renewal of war, he captured the islands of St Lucia and Tobago in June 1803 and made significant other gains.
Hood returned to Britain early in 1805. On 25 September that year, while engaging a French squadron off Rochefort, he was struck in the right elbow by a musket ball; the wound required the amputation of his right arm. In 1807, he returned to sea, after election to parliament for the Bridport seat, still in the ‘Centaur’ in 1807 and was part of Gambier’s fleet at Copenhagen. He was promoted rear-admiral on 2 October and commanded the force that captured Madeira on 26 December 1807. After action in the Baltic, he was second in command at Corunna in January 1809 for which he received the thanks of the House of Commons. He was created a baronet on 13 April 1809. Further service followed in the Mediterranean and he was promoted vice-admiral on 1 August 1811. Appointed commander-in-chief in the East Indies, he took up his post in mid-1812. He died at Madras on 24 December 1814 having contracted malaria three days earlier.
Back to Search Results
Buy a print License an image
Share:
Link copied to your clipboard!