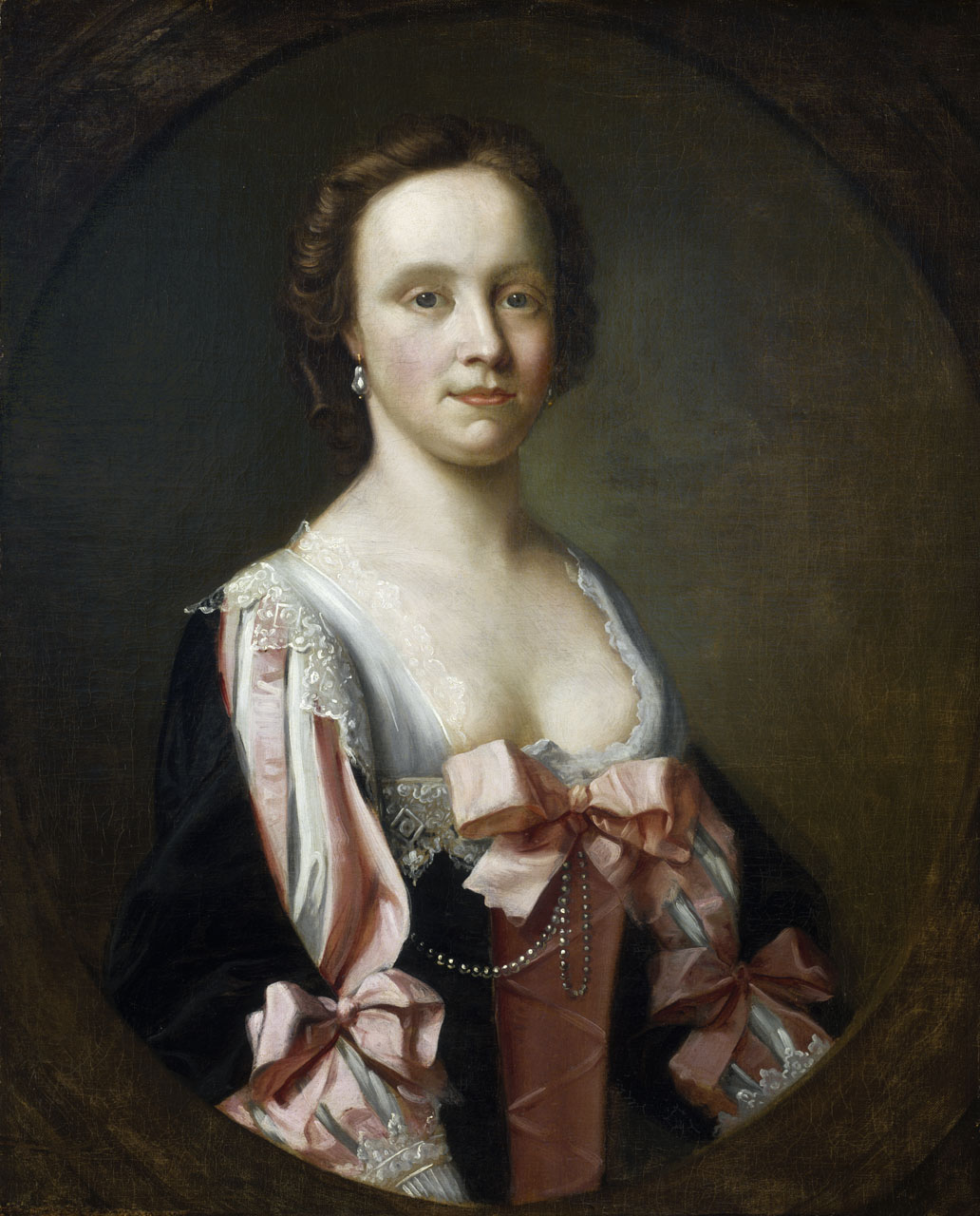 (Updated, February 2019) A half-length portrait slightly to right in a painted oval with a plain background. She wears a black velvet saque, or dress, open at the sleeves and front to reveal a low-cut pink silk under-dress. The slashed sleeves reveal the white cambric chemise underneath and with lace cuffs and edging to the bodice. The sleeves of the saque are gathered at the elbows with large pink-silk bows and there is another at the top of the bodice. Below this is a loop of pearls and she wears earrings of single pear-shaped pearls.

The sitter was Elizabeth Cooke (sometimes Cook), eldest child and daughter - of three, and two brothers- of John and Elizabeth Cooke of Winchester, Hants. She was born on 21 March 1725 and married Captain Justinian Nutt at Wickham, Hants, on 10 August 1749 when her fortune was reported by the 'Gentleman's Magazine' to have been £10,000. This portrait is one of a pair probably made to celebrate their marriage, that of the captain being BHC2915, (q.v. for further details of him and their two sons). He became one of the four Captains of Greenwich Hospital in 1754 and died in December 1757. She remarried on 2 June 1761 - being referred to in both the 'Public Ledger' and 'Lloyd's Evening Post' of the 3rd as 'a widow lady of a considerable fortune' - to Lieutenant Charles Besson, one of the lieutenants of the Hospital, of whom there is also a miniature by Nathaniel Hone in the collection (MNT0120). This is also dated 1761 so may itself be another marriage item. Besson had lost a leg about 1759 and spent the rest of his long life at Greenwich, dying in 1822. Elizabeth died on 11 October 1797 but Besson remained in contact with members of the Nutt family since an 1819 codicil to his will (made 1811) added small bequests to three of its members 'as a mark of my affectionate regard for them' . The two Nutt portraits are one of few such pairs in the Museum collection. Many were of course painted but time and sale have often split them up, with the husband remaining known for historical reasons and the wife, or at least her identity, often lost sight of in sale titles like 'portrait of an unknown lady'. The Museum acquired this pair in 1971.
Back to Search Results
Buy a print License an image
Share:
Link copied to your clipboard!