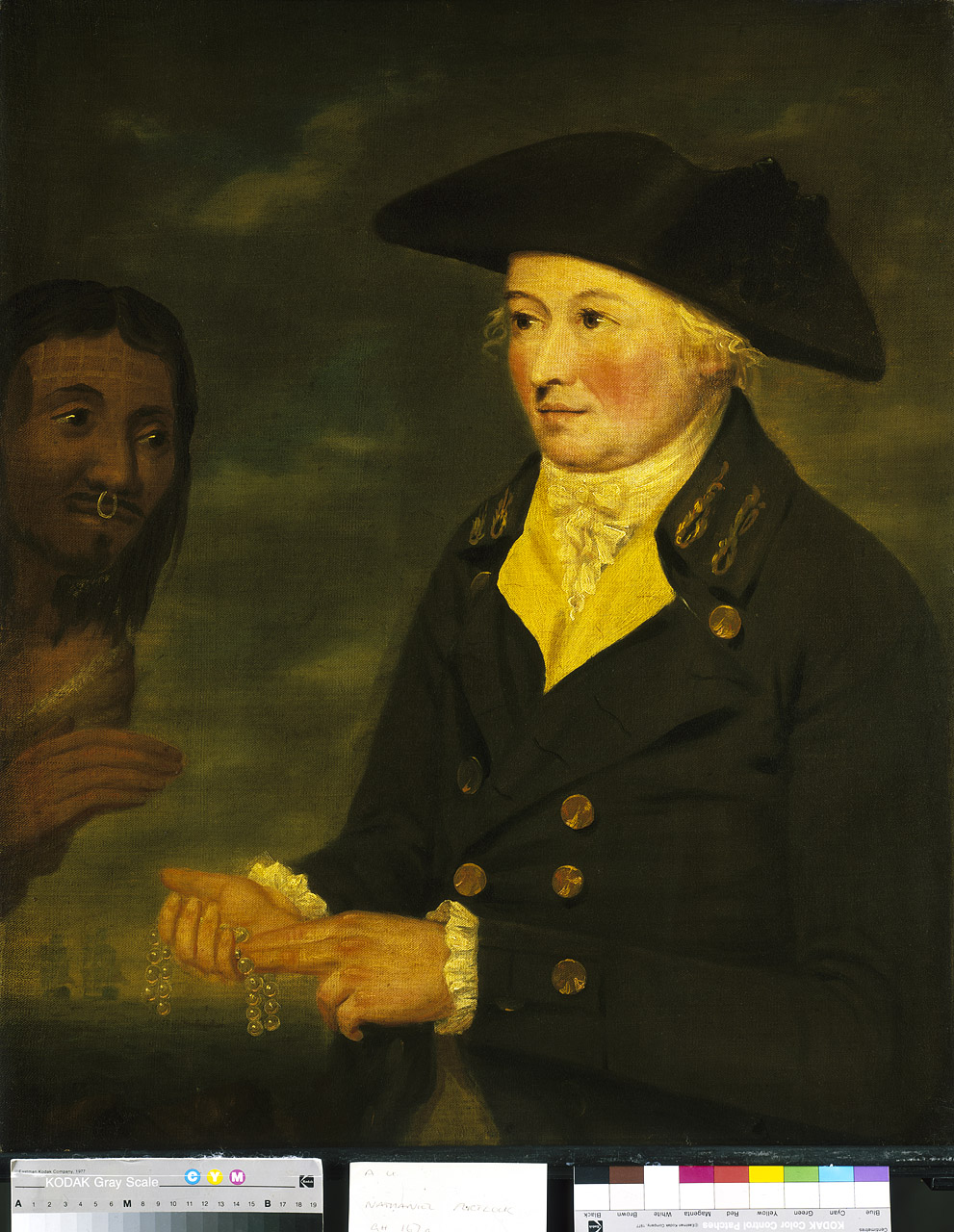 (Updated March 2019) This portrait was presumably painted about 1788, on Portlock's return from the fur-trading expedition he made to the American north-west for the short-lived King George's Sound Company. It shows him half-length to left, wearing a hat, in a brown double-breasted merchant-officer-style coat with laced collar, over a yellow waistcoat. In his right hand he holds a string of what are certainly intended (from knowledge of the voyage) as glass beads, and is apparently bartering with a native of the Canadian North-West, partly out of frame on the left. This figure has now (Feb. 2016) been identified as a man of Nootka Sound, based on a head and shoulders portrait engraving after John Webber in the official account (1784) of Cook last voyage (see Joppien and Smith, 'The Art of Captain Cook's Voyages', vol III [Catalogue] (1988) p. 456, repr. with the original drawing). Portlock was at Nootka Sound on his fur trading voyage, so this was a clear choice of model and the two ships of his expedition, the 'King George' and 'Queen Charlotte' (commanded by George Dixon), are in the distance.

Portlock was born in Norfolk, Virginia, where his grandfather had emigrated, probably from the English south-west, around 1685. Though records were lost when Norfolk was burnt at the start of the War of American Independence he was probably born in 1747, his age on his lieutenancy certificate of 1780 being given as 'more than 32', but other sources give dates as late as 1751. His father died on 15 March 1752 aged only 25, apparently of smallpox, his gravestone (also recording deceased children) still being visible in the churchyard of what is now St Paul's Episcopal Church, Norfolk. Other members of the family in Norfolk had maritime connections and young Nathaniel too went to sea. According to the last (1922) edition of the catalogue of the former Naval Gallery in the Painted Hall at Greenwich, he was impressed into the Navy when second mate of his older brother’s (Paul’s) ship in 1771, which accords with his own 1783 statement (in a claim for property lost as a result of him being an American Loyalist). It is otherwise known it was under Captain Charles Douglas in the 'St Albans' but Douglas allowed him to muster as a volunteer able seaman (first record being stated by DNB as 1772) and soon advanced him to midshipman. After other service he was entered as AB and again quickly appointed master's mate in the 'Discovery' under Charles Clerke on Cook's third voyage, 1776-80, shifting to 'Resolution' in 1779 after Cook's death. He became a lieutenant in September 1780, after being sent home in advance from Cape Town in the frigate 'Sybil' with voyage journals and observations, itself an indication of his standing with James King, who was by then commanding the returning expedition. In 1785 Portlock commanded the 'King George', in company with the smaller 'Queen Charlotte' (George Dixon), on the successful North Pacific fur-trading expedition already mentioned. Having wintered twice in Hawaii (1785, 1786) between trading seasons they spent November to March 1787-88 at Macao before returning home round the world. Portlock and Dixon's published account of the voyage appeared in 1789. In late 1790 he declined command of the naval brig 'Chatham' on health grounds but in 1791-93, still as lieutenant, captained the schooner 'Assistant', as consort to his 'Resolution' shipmate William Bligh's 'Providence' on the latter's second breadfruit voyage to Tahiti. For this Bligh recommended him and gave him warm praise as a subordinate. Promoted commander on his return, in 1799 Portlock was appointed to North Sea service in the experimental sloop 'Arrow', armed with heavy carronades, and on 9 September off Harlingen he captured the Dutch ship 'Draak' (Captain van Etch), mounting six 50-pounders, two 32s, sixteen 18s and with 130 men, in a 15-minute action. ‘Arrow’ lost one man with nine wounded. Reports that Portlock was wounded are not borne out by the log of the accompanying ‘Wolverine’, (12 guns, William Bolton) which states that ‘Arrow’ had one man killed and nine wounded, the most senior being a master’s mate. (‘Wolverine’ had herself seized the Dutch brig ‘Falcon’ nearby and subsequently burnt the ‘Draak’.) In the stormy small hours of 9 October 1799, a sloop manned by twenty of Portlock’s men roused fishermen on Vlieland to a ship in distress off Terschelling. This was the British frigate ‘Lutine’ (Lancelot Skynner), with which 'Arrow' had been in company, carrying over £1 million in bullion to subsidize the Hamburg stock exchange. The Dutch put boats to sea at 5 a.m. and recovered just three officers’ bodies from the sea, one being Captain Skynner. Portlock had all three buried on Vlieland and his report dated 10 October to his local commander, Vice-Admiral Andrew Mitchell in the 'Isis', was forwarded home as first news of the ‘Lutine’s’ loss. Some references identify a survivor, found on a piece of wreckage, as clerk of the 'Lutine' but more recent enquiry has identified him as an injured able seaman called John Rogers. He was transferred to 'Isis', then to the hospital ship 'Grana' at Sheerness, and subsequently lost sight of. Portlock had by then been promoted to captain (28 September 1799) after the ‘Draak’ action and returned home. From 3 June to 28 June 1802 his last command was briefly as temporary captain of the ‘Glatton’ while she was fitting to take stores and convicts out to Port Jackson (Sydney), New South Wales, following her part at the Battle of Copenhagen in 1801 (when she was commanded by William Bligh). On 28 June he was relieved by another Cook (second) voyage veteran, James Colnett, who took 'Glatton' to Australia, sailing on 23 September and arrivng back in 22 September 1803. By summer 1803 Portlock was commanding Sea Fencibles at Poole, on the south coast, but later moving to the Dartmouth area and living at Salcombe. On 20 January 1805 the Fencibles under his direction at Dartmouth saved the Danish ship 'Den Lille Catherina' from being wrecked in Bigbury Bay, an incident on which he sent a report to the Admiralty, while the owners presented him with an inscribed silver goblet in testimony to his efforts. His son later gave this to the Royal Marines and it remains among their mess silver today. The inscription reads: 'The owners of the ship Den Lille Catherina of Copenhagen Request CAP NATHANIEL PORTLOCK of the Royal Navy to accept this piece of plate as a small token of respect and gratitude for his voluntary, indefatigable and judicious exertions in extricating the ship from her perilous situation in Bigbury Bay on the 20th Jan 1805.' Portlock was still listed with the Dartmouth Fencibles in 1807 but his health subsequently deteriorated and late in 1816 he succeeded to a vacancy as a Captain of Greenwich Hospital on the death of Captain Joseph Ellison (d. 1 October). Ellison was a captain of 1783, had been Lieutenant-Governor of the naval hospital at Plymouth, and was at Greenwich from 1803. He and Portlock were presumably connected, if only as friends, since Portlock’s son was his namesake. Portlock died at Greenwich on 12 September 1817 and was buried in the officers' vault of the Hospital burial ground.

Portlock had six children with his wife Elizabeth (née Gilmour) whom he married at St Mary Aldermary, London, 18 December 1781, and with whom he subsequently lived at Gosport. Two boys called Nathaniel died in infancy but two daughters and two sons were still living when his will was last amended in 1801. Of these only the second son and youngest child appears to have survived to represent the male line, and was the last in it. This was Major-General Joseph Ellison Portlock, R. E. (b. 1794, bap., 19 Aug 1795, Holy Trinity, Gosport - d.1864, Ireland). He was an eminent surveyor, geologist and promoter of army education. He had no children and this portrait was presented to the Naval Gallery at Greenwich in 1901 by his nephew (Portlock's grandson through his younger daughter Mary), Captain William Frederick Portlock-Dadson, formerly of the Royal Marine Light Infantry and later in the colonial service as Governor of the penal settlement at Mazaruni, British Guyana, and a JP at Kingston, Jamaica. After Portlock’s father’s death in 1752, his mother Rebecca (formerly Ballard, and a widow with a daughter) quickly remarried a third time to a Richard Scott, who became guardian to her three surviving Portlock children - Paul, Nathaniel and a daughter - and had others with her. Stephen Scott, Nathaniel's half-brother, was impressed into the Royal Navy with him in 1771/2 but later rose to be a Commodore in the Russian navy. (The foregoing summary incorporates research information kindly supplied in February 2009 by Eugenia Fayen of Hamden, CT, USA, a Portlock descendant.)
Back to Search Results
Buy a print License an image
Share:
Link copied to your clipboard!