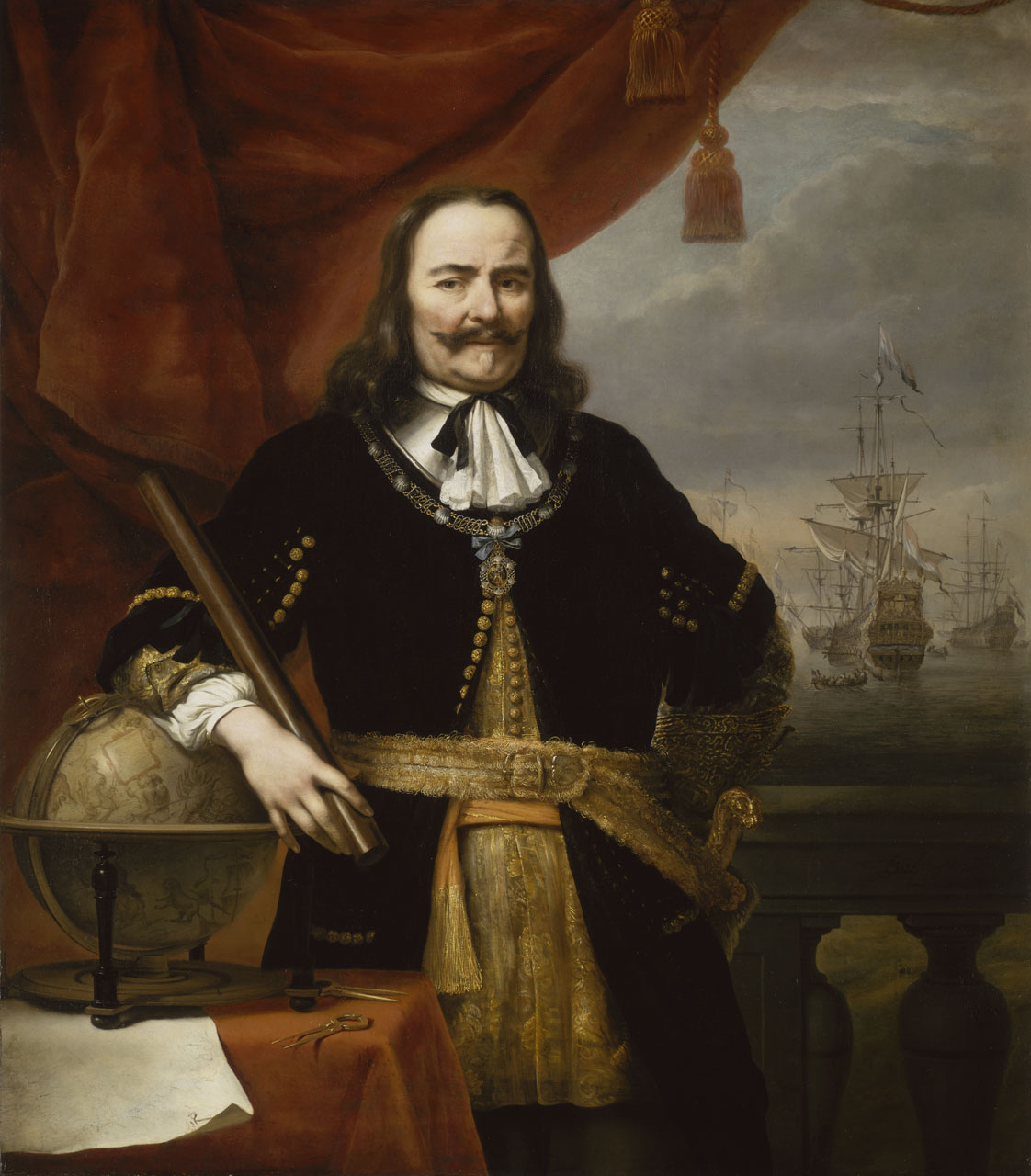 This portrait shows Lieutenant-Admiral, Michiel de Ruyter, almost full-face, in three-quarter length. De Ruyter is shown wearing a black coat with gold buttons over a long-sleeved gold-brocaded waistcoat. He is clasping a commander’s baton with his right hand. Around his neck, he wears a pendant depicting St Michael slaying Satan. This pendant alludes to the Order of St Michael into which he was admitted in 1666. Following victory in the Four Days Battle, between 1 and 4 June 1666, the Amsterdam Admiralty presented de Ruyter with the gold chain and gold-filigree sword belt proudly displayed in this portrait. A seascape is visible in the background to the right.

De Ruyter was the highly revered naval hero in command of the Dutch fleet during the Second Anglo-Dutch War (1664–7). As such he was the most celebrated of Dutch seamen and was thought to be the most able commander of the seventeenth century. In 1667, the same year as the production of this portrait, he achieved a striking success when he invaded the Medway. The high esteem in which he was held is evinced in this majestic official portrait. This painting is one of a series of six near-identical state portraits of the eminent Lieutenant-Admiral, Michiel de Ruyter produced by Ferdinand Bol between 1667 and 1669. These works were commissioned by the governors of regional Admiralties to celebrate the Dutch victory at the Four Days Battle of 1666 under de Ruyter's command. This painting is one of the best surviving examples. The others are held by the Rijksmuseum and Scheepvaartmuseum in Amsterdam, the Mauritshuis in The Hague, Zeeuws Museum in Middelburg, and the National Museum in Kopenhagen.

Contemporary details in the portrait attest to de Ruyter’s successful seamanship. In the lower left of the painting a large Blaeu celestial globe with a navigational chart and two pairs of dividers sit on the red-draped table. One of the dividers points to the chart which shows a faint illustration of Walcheren, an island at the mouth of the Schelde estuary, where de Ruyter was born in the town of Vlissingen (Flushing). The explicit emblematic presence of the town in this illustrious portrait serves to immortalize de Ruyter as a local and a national hero. De Ruyter’s crumpled brow, ruddy cheeks and piercing gaze all reflect his age and experience. Moreover these features allude to his well-known status as a Dutch national Bestevaêr or ‘grandfather’.

Technical examination of the portrait has revealed that the ships, in the background, on the right, were painted on a separate, small rectangular canvas which was subsequently inserted into the main portrait. This seascape was painted by Willem van de Velde the Younger. It meticulously depicts the Dutch fleet accompanied by, de Ruyter’s flagship, the 'Zeven Provincien'. The seascape refers to the savage Four Days Battle when de Ruyter led the Dutch to victory. Collaboration between portraitist and marine painter, such as this one between de Bol and Willem van de Velde the Younger, is unusual but is not an isolated case. Another example is the portrait of Aert van Nes in the Rijksmuseum. This stately portrait of Lieutenant-Admiral van Nes was painted by Bartholomeus van der Helst in 1668 but the background, showing vaporous clouds and a sea covered with detritus following a naval battle, was painted by Ludolf Backhuysen. Bol’s image of de Ruyter effectively unites a portrait with a history painting, forming an iconic, indivisible whole.
Back to Search Results
Buy a print License an image
Share:
Link copied to your clipboard!