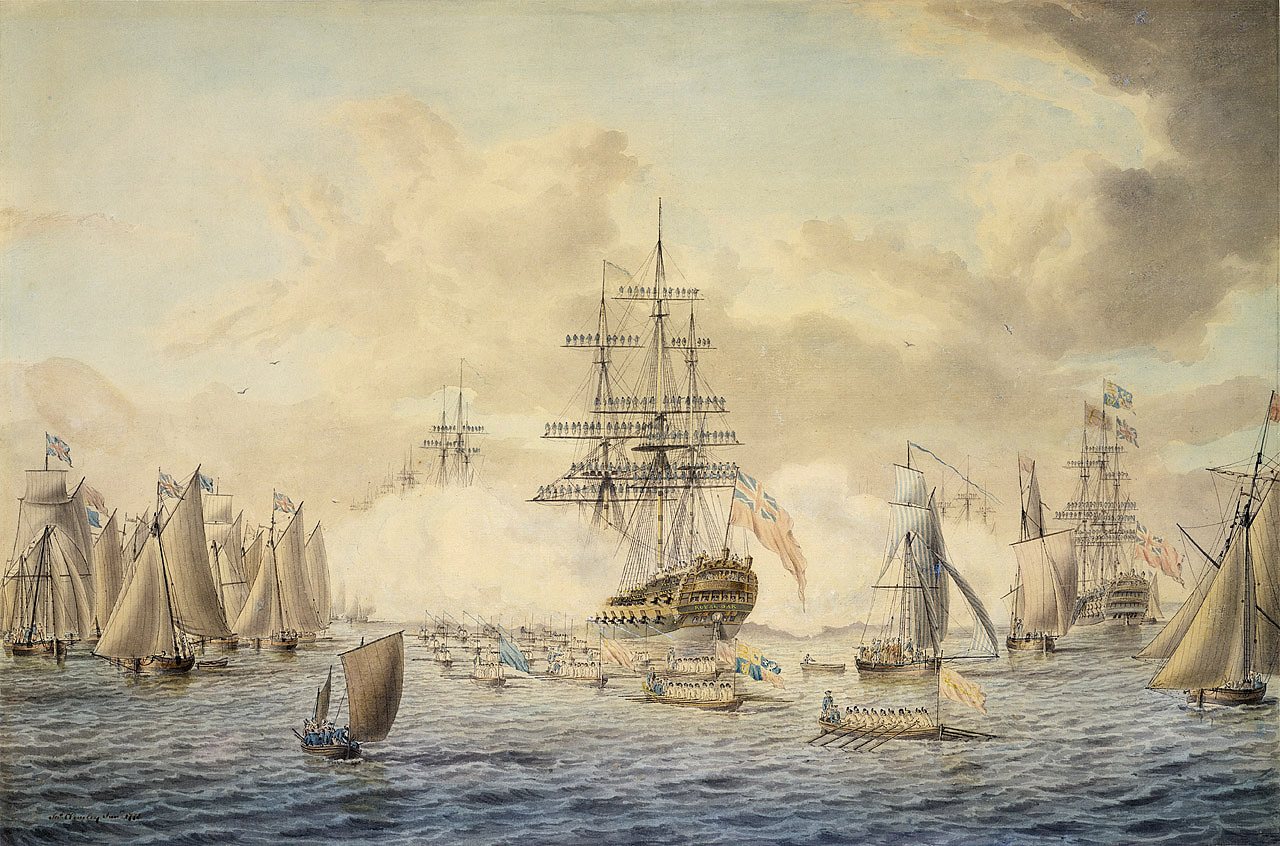 John Cleveley was the son of the shipwright and marine painter John Cleveley the elder, and twin brother of Robert Cleveley who was also a marine artist. This is one of three watercolours of the June 1773 review by him in the collection: the others are PAH9498 and PAH9499. Cleveley was present when it took place, as were other marine artists who depicted it including Dominic Serres and Richard Paton: for a plan by Serres of the anchoring disposition of the ships involved see PAH5091. The review was just one element in George III's five-day visit to Portsmouth from 22 to 27 June, engineered by Lord Sandwich as First Lord of the Admiralty as part of his strategy to increase the more army-focused monarch's interest in the Navy and thereby make him more willing to back the programme of necessary dockyard and other reforms that Sandwich then thought necessary. Sandwich himself arrived about ten days earlier, taking up formal presence on the port guardship 'Barfleur' (90 guns) which hoisted the Admiralty ensign at the main during his stay except when the King was on board, and displacing the flag of the Portsmouth Commander in Chief', Vice-Admiral of the Red Thomas Pye, to the 'Royal Oak' (74 guns). This in turn required its flag-officer, Vice-Admiral of the Blue the Rt Hon. George, Lord Edgcumbe, to shift his colour to the 'Dublin' (74). During the time the king was at Portsmouth he stayed in the military Governor's house, held a levee, visited and dined on the 'Barfleur' on three days (22-24 June), and conferred knighthoods, including to naval officers on the 'Barfleur' on the 24th, which also saw Pye promoted to Admiral of the Blue. He also visited the dockyard to inspect work in progress as well as ships in ordinary (reserve) in Portsmouth upper harbour. He also made use of the 'Augusta' yacht to sail out to the Isle of Wight and a very detailed account of the entire proceedings was published in the 'London Gazette' of 29 June. A list of the ships scheduled to be present appears in 'Lloyd's Evening Post' of 11-14 June (see notes to PAH5091) and it was elsewhere reported that the catering contractor for the three royal 'banquets' held on the 'Barfleur' was allowed a budget of up to £4000 (over £616,000 in 2020 equivalent). This drawing shows the king passing through the fleet specially assembled for his inspection on the afternoon of 22 June, with 'Royal Oak' flying Pye's vice-admiral's red colour at the fore and the 'Barfleur' at far rigt still flying the Royal Standard at the main. It is signed and dated 1773.
Back to Search Results
Buy a print License an image
Share:
Link copied to your clipboard!