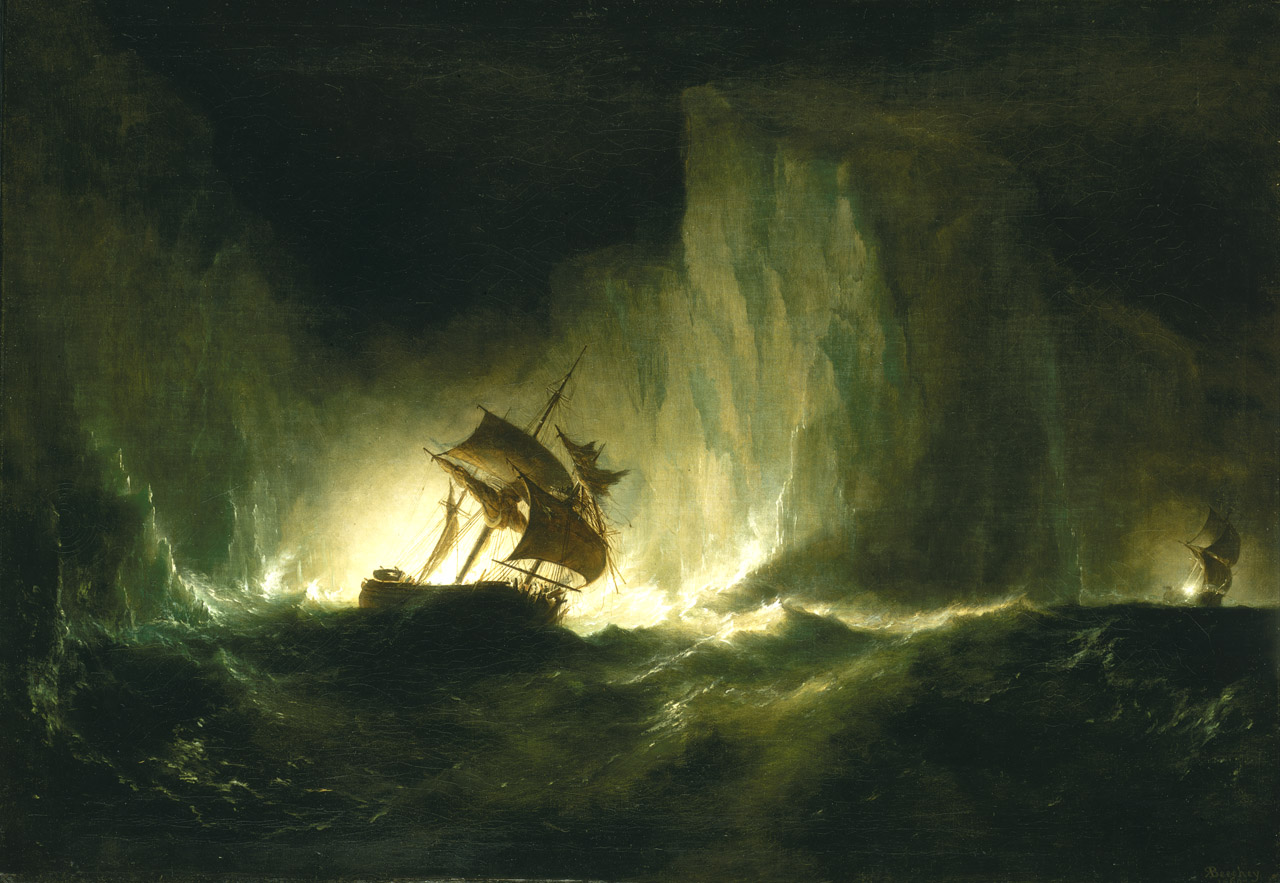 HMS 'Erebus' passing through the chain of bergs, 1842

(Updated, March 2019) This painting captures a dramatic scene from Rear-Admiral Sir James Clark Ross’s Antarctic expedition of 1839-43. Ross was given command of HMS ‘Erebus’ and HMS ‘Terror’ to carry out a magnetic survey in the Antarctic region. The expedition resulted in various discoveries, including the area subsequently known as the Ross Ice Barrier.

The artist portrays the Antarctic as a world of grandeur and the sublime: the night scene, the agitated waves and the towering icebergs dwarfing and isolating the man-made ships, eerily lit by flashes of light on their dangerous passage through the pack with broken masts.

By the mid-19th century, depictions of both the Arctic and the Antarctic held a fascination for the art-loving audience, and it is likely the painting was executed soon after Ross published his travel narrative “A Voyage of Discovery and Research to Southern and Antarctic Regions” in 1847. The artistic formula employed here links the painting to the tradition of the sublime natural catastrophe as it had appeared in European painting since the late 18th century. More precisely, the scene refers to an episode in the travel book (vol. II, pp. 217-22) and to the print by J.E. [John Edward] Davis, first mate of HMS 'Terror', that accompanies it, documenting and defining its most dramatic and glorious moment.

After the collision of the two ships on 12 March 1842, which crippled the ‘Erebus’s’ masts, the latter escaped the life-threatening gales of a storm by moving into a narrow channel in the chain of bergs. The crew could just make out the ‘Terror’s’ light, reassuring them of their fellow sailors’ safety, when they experienced the natural phenomenon of what they believed to be the Aurora Australis. The appearance of the bright light marks the end of the peril and in the narrative is followed by a reference to a collective prayer. The painter, Richard Brydges Beechey, has adhered to Davis’s composition and at the same time heightened the drama of the scene according to the academic rule, matching and surpassing the written account. The painting is probably the one exhibited as no. 817 at the Liverpool Society of Fine Arts in 1860, with the much fuller title: 'Escape of HMS Erebus from between icebergs after being in a collision with "The Terror" on the night of the 12th March 1841 (see Sir John Ross' Voyage to the Southern Seas) from a sketch by J. Davies, then master of "The Terror'". It was apparently painted for Davis, whose descendants presented it to the Museum in 1948. In 1877 Beechey also exhibited a painting titled 'North Polar Expedition' at the Royal Academy (no.1339), which given the circumstances and date difference is likely to be another another relating to the expedition rather than this one.

Admiral Richard Brydges Beechey (1808-95) was one of the naval sons of the portrait painter Sir William Beechey. He entered the Royal Naval College at Portsmouth in 1821, probably trained under its drawing master John Christian Schetky, and his career included a long voyage of exploration to the Pacific in the 'Blossom' under command of his brother Frederick William Beechey. He retired from the Navy in 1864, but continued to paint and to exhibit at the Royal Academy thereafter. He specialized in maritime subjects and, while there were other professional marine painters who had sea experience, was arguably the best (as well as the most senior in rank) that itscommissioned officer corps ever produced
Back to Search Results
Buy This Image License This Image
Share:
Link copied to your clipboard!

We don't allow replicas to be made of our collections without prior consent.
Please contact the picture library.

This item is stored offsite - allow at least eight days for your order to be processed. Please contact Archive staff for further information.

Click "Continue" below to continue processing your order with the Library team.