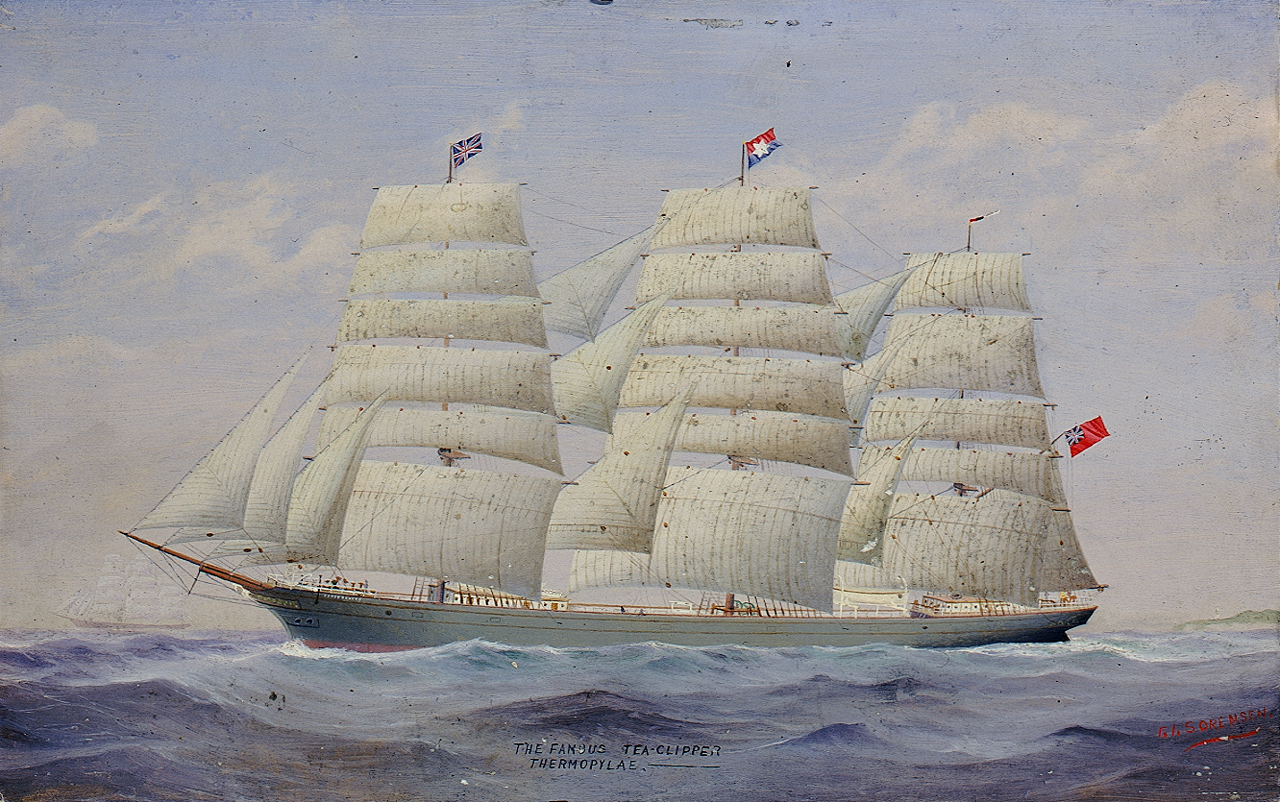 A portrait of the famous tea clipper ‘Thermopylae’. She is shown broadside-on in full sail flying the house flag of the Aberdeen White Star Line.

She was designed by Bernard Waymouth of London and built in 1867 by Walter Hood & Co for the Aberdeen White Star Line. The owner of this shipping line, George Thompson, wanted a clipper ship to outstrip the competition. He commissioned the ‘Thermopylae with her iron framework supporting a wooden hull, she was built primarily for speed. Launched in 1868 she completed her maiden voyage from Gravesend to Melbourne in a record-breaking 63 days. Between 1869 and 1882 she was employed as a tea clipper plying the Far Eastern Tea Trade, where speed was of the essence bringing tea to Europe as quickly as possible. 'Thermopylae' and the 'Aberdeen Line' fleet in general maintained a reputation across all their routes for style and class in their glistening green livery. With the ‘Cutty Sark’ she emerged as the pinnacle of the clipper class. The trade route became ferociously competitive where great prizes of revenue and prestige awaited the first to bring the tea home. Competition was fierce and attracted the best captains and crews. The world was gripped by the head-to-head challenges of the ‘Cutty Sark’ and ‘Thermopylae’ who had their showdown in the summer of 1872, in the annual race to bring the first of the season's tea to London. Both ships left for London from Shanghai, on the east coast of China. The ‘Cutty Sark’ was 400 miles in the lead when a storm blew up round the Cape of Good Hope. Disastrously, she lost her rudder and had to make a temporary one, and she reached London seven days behind ‘Thermopylae’. By the 1880s, steam ships gained supremacy and by 1885 both ships found a new lucrative market in the Australian wool trade. The old rivalry was reborn and between 1885-95 the ‘Cutty Sark’ beat the ‘Thermopylae’ every year on the wool run. In 1895 the ‘Thermopylae’ was bought by the Portuguese navy for use as a training vessel and on 13 October 1907 she was sunk by gunfire and torpedoes by units of the Portuguese Navy at sea off the Tagus.

The painting has been signed ‘F.I.Sorensen’ and inscribed ‘The Famous Tea-Clipper Thermopylae’.
Back to Search Results
Buy a print License an image
Share:
Link copied to your clipboard!