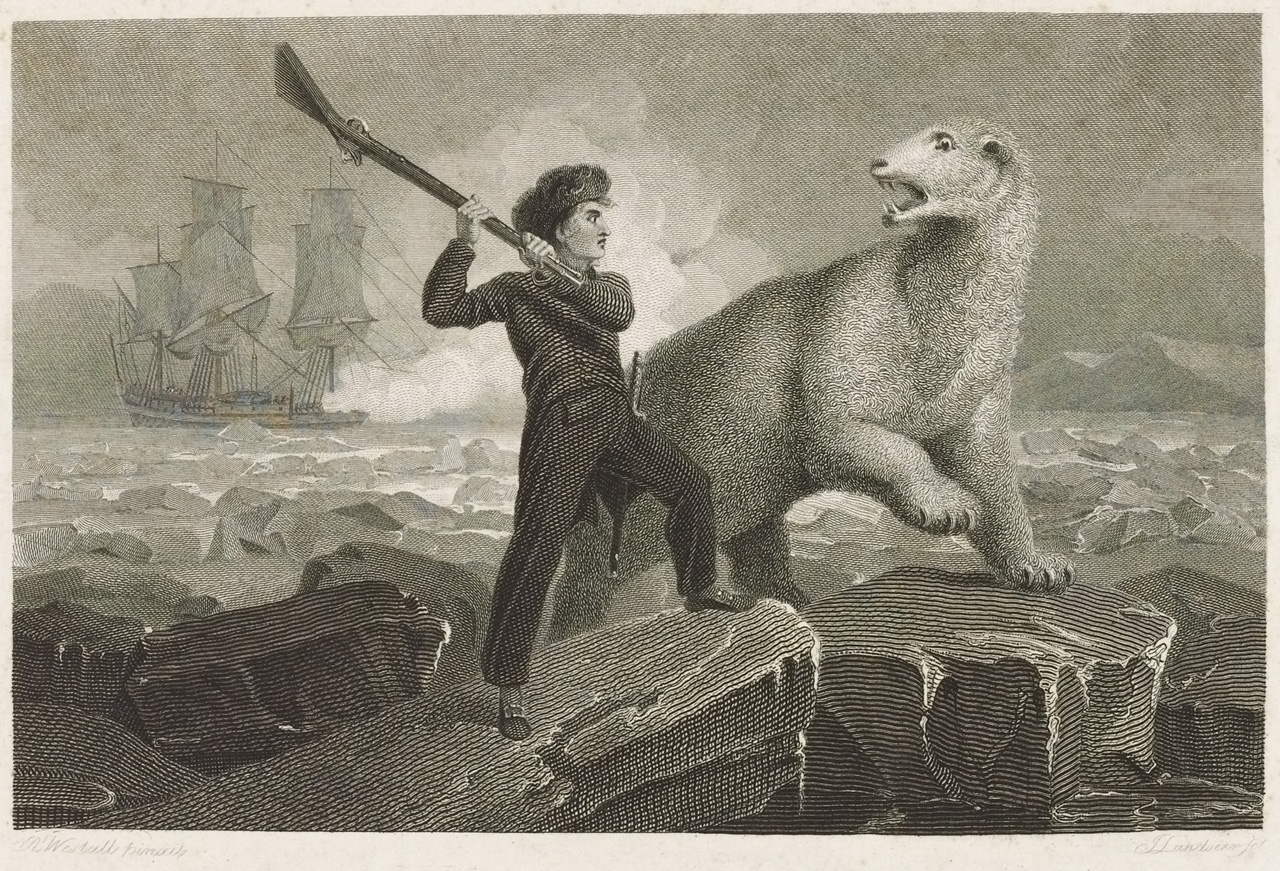 Nelson and the Bear

This print is after Westall’s 1806 painting ‘Nelson and the Bear’, see BHC2907. It was commissioned by John McArthur, as a plate for the first biography, ‘The Life of Admiral Lord Nelson, KB’, which he wrote with James Stanier Clarke in 1809. Engraved by John Landseer, it was one of a series painted by Westall for the book, illustrating Nelson’s life as a series of heroic acts.

In 1773 Horatio Nelson served as a midshipman in the ‘Carcass’, bomb vessel, under Captain Skeffington Lutwidge. Together with the ‘Racehorse’, it formed Commodore Phipps’s Polar expedition, to try to find a north-east passage to the Pacific. The expedition was obliged to return when the ships sailed north from Spitsbergen and found the way barred by ice. During the attempt, Nelson set off with a friend to stalk a polar bear. His musket misfired and he was forced to attack the bear with the butt-end. He was saved from harm when a rift in the ice separated him from the animal. A cannon was also fired from the ship to scare the bear off and Nelson justified his action to a furious captain stating that he wished to kill the bear to take its skin home to his father.

In this imaginary reconstruction, Nelson is shown dressed as a midshipman. Wearing his sword on his left, he raises his musket in an attempt to strike the bear. They confront each other and make eye contact, Nelson standing on one part of the ice and the polar bear on another divided by a crack. The bear with one paw raised bares his fangs as he turns towards Nelson in a threatening gesture. The painting draws attention to the unequal struggle between the two in which Nelson, despite being at such a disadvantage is not afraid to confront the bear. The ‘Carcass’ can be seen sketched in the background to the left, firing a cannon. Despite the grey and inhospitable surroundings, the artist cannot avoid the artificiality of the account. Nelson is silhouetted against a white shaft of light and in clean profile against the yellow polar bear. The incongruity of the scene is highlighted by the neatness of Nelson, who is shown coatless, gloveless and wearing buckled shoes in the freezing conditions, as he confronts and attempts to tame savage nature. In the event, both Nelson and the bear escaped unharmed.
Back to Search Results
Buy a print License an image
Share:
Link copied to your clipboard!