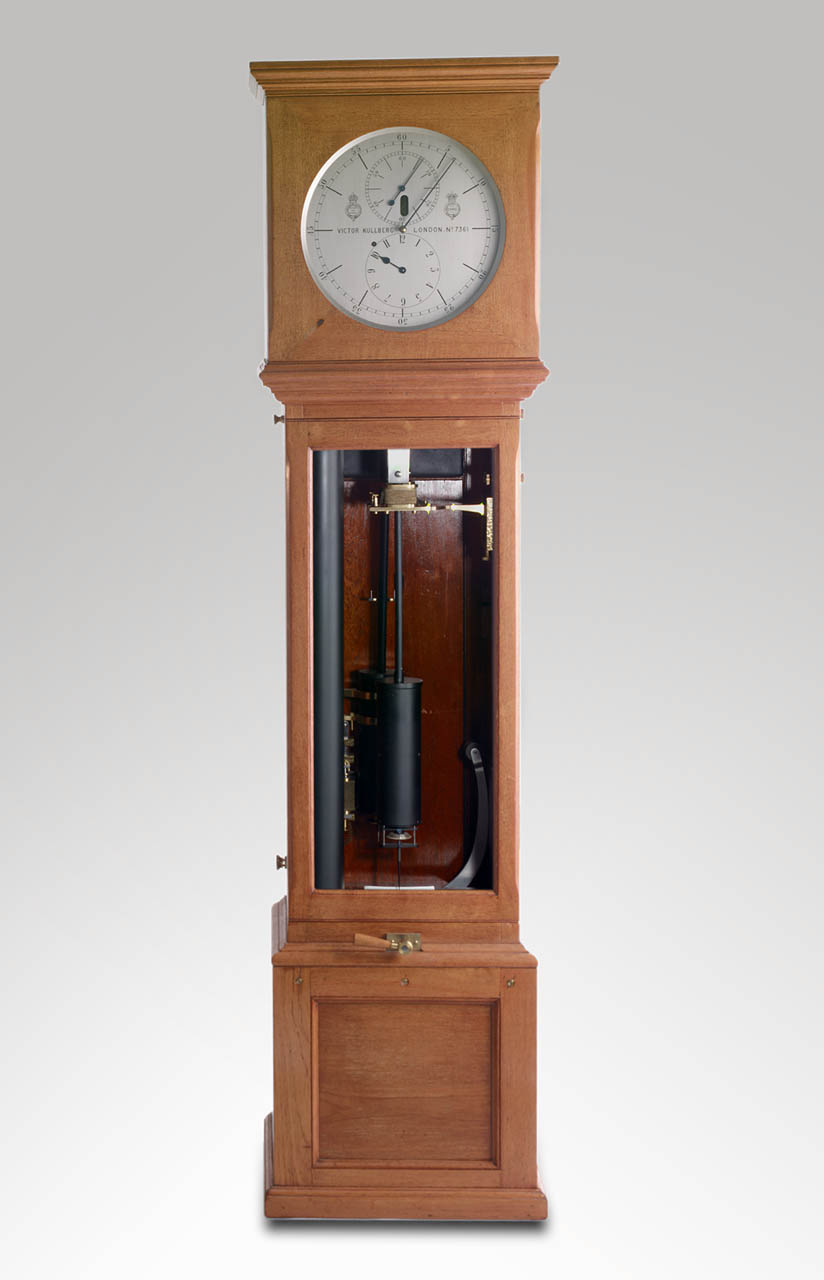 An astronomical regulator with a floor-standing case and hood made of teak. The trunk and hood have hinged, glazed, lockable doors. There is one pair of screwed electrical terminals on the left flank of the trunk, and two pairs on the right flank. Just below the centre of the trunk door is a manually operated lever for re-setting the auxiliary pendulum.

The 337 mm diameter silvered brass dial with separate silvered sight ring is laid out in a regulator style. It has concentric Arabic five-minute numerals outside a minute-track and internal observatory marks at five-minute intervals. The subsidiary seconds dial above the centre has Arabic ten-second numerals inside a seconds track with observatory marks at five-second intervals. The subsidiary hour dial below the centre has Arabic one to 12 hour numerals within a circle. The winding aperture is at the 41-minute position, 52 mm from the dial centre. There is an oblong aperture within the seconds dial for observing the adjustment of electrical contacts on the movement.

The dial is signed across the centre 'VICTOR KULLBERG LONDON. NO 7361'. There are engraved medals 'TO HM THE KING OF SWEDEN AND NORWAY' AND 'GRAND PRIX PARIS 1900'. The dial is screwed to a brass false plate, which is in turn screwed to four substantial tapering brass dial feet screwed to the movement front plate.

The frame consists of a pair of 261 x 195 mm rectangular brass plates, separated by six substantial tapering brass pillars. The frame is held together by large, brass screws and washers. The plates have a curled finish.

The movement is secured to a massive cast iron support combined movement and pendulums support by four large brass and steel knurled screws threading into two L-shaped brass brackets screwed to the back of each plate.

The four-wheel, eight-day duration train has Harrison's maintaining power acting on the great wheel, and stop-work in the form of a sliding, sprung stop-piece screwed to the front flange of the barrel. This
engages with a steel stud screwed to the inside of the front plate when activated by the weight line.

The centre wheel is screwed to a collet adjacent to the pinion. The centre arbor has an extended front pivot carrying the minute hand, and driving the motion work. The third wheel is retained in a similar way. The escape is screwed to a collet. The front escape pivot runs in a cock screwed to the outside of the front plate. The jewelled dead-beat pallets are steel and screwed to a collet on their arbor, the front pivot of which runs in a block screwed inside the front plate. The pallet arbor also carries a brass frame for beat adjusting. The steel crutch has a brass fork. The rear centre wheel pivot and both third wheel pivots are fitted with adjustable steel endstops screwed into large brass holders screwed to the plates. The escape and pallet arbor pivots run in screwed, jewelled holes, with screwed end stones to pallet and rear escape pivots.

The clock is driven by a cylindrical, brass cased lead weight (approximately 2.5 kg), suspended from a brass pulley and stirrup. The grooved winding barrel has a keyhole aperture to facilitate replacement of the weight line. A jockey barrel pivoted between the plates draws the driving weight to the left hand side of the case. The weight descends within a matt-black painted steel tube screwed to the side of the case within the trunk door.

The concentric tubular zinc and steel temperature compensated pendulum has a cylindrical, matt-black painted brass cased bob with a graduated, silvered rating nut. A steel pointer screwed to the bottom of the rod indicates amplitude on a silvered scale screwed to the base of the case.

The movement is fitted with three sets of electrical contacts, two of which are mounted on a dovetail slide screwed to the front, upper right hand side of the front plate. These contacts can be set to close once every minute, and once every hour respectively, by steel contact arms carrying cylindrical jewels mounted on the seconds and minute arbors. Simultaneous closure of both contacts make a circuit on the hour, every hour. The third pair of contacts is mounted on a brass arm pivoted between the movement plates. The position of this arm is controlled by a second arm, also pivoted between the plates that shares a common arbor with an arm mounted outside the front plate. The front plate carries a steel 'V' and a brass roller. The position of this arm, and therefore the internal contact, is controlled by notched discs screwed to the cannon wheel and hour wheel. Once every 12 hours, the notches in the two discs coincide with the positions of the steel 'V' and brass roller, allowing the arm and the internal arm carrying the third contact to drop slightly, and for the contact to come into the path of a second jewelled contact arm mounted on the seconds arbor. This contact arm is set at a position 20 seconds (120°) behind the first jewelled contact arm (this produced a return impulse to the site of the master clock to show the error of the remote clock after correction).

Screwed inside the right hand side of the trunk, approximately in line with the centre of the pendulum, is a brass frame that supports a pair of electro-magnetic coils that embrace the pendulum but allow it to swing freely. These coils act on a steel ‘U’ shaped permanent magnet screwed to the pendulum rod. Introducing a current through the coils produces either an attractive or repulsive force, depending on the direction of the current, thus allowing the natural period of the pendulum to be altered, so the clock can be brought to time without touching any part of the mechanism.

Mounted directly behind the primary zinc and steel pendulum is an auxiliary seconds pendulum with a wood rod. Both pendulums share the same cast-iron support. In normal use the auxiliary pendulum is held to one side on a sprung latch attached to a solenoid. Between the two pendulums is a glass partition. A manually operated lever on the outside of the case, just below the trunk door operates an internal aluminium arm with a roller that returns the auxiliary pendulum back to its latch.

An entry dated 16 September 1904 in the Victor Kullberg workbooks held at the Guildhall Library, London, shows the clock was commissioned by the British Admiralty. The entry shows the cost to Kullberg of employing specialist subcontractors to make the individual parts of the clock was £169 19s 3d. When delivered, it is believed it was installed at Windmill Hill Signal Station, Gibraltar, where it controlled the timeball. In 1935 the clock was transferred to the Chart and Chronometer depot in Gibraltar. In 1983 it was shipped back to England, to the Ministry Of Defence Chronometer Section, Herstmonceux, where is was cleaned and re-finished before being installed in the Hydrographic Office, Taunton, later that year as an office furnishing. On 13 June 2002, the clock was transferred to the Royal Observatory Greenwich.

The purpose of this, and other similar clocks was to provide daily, visual time signals to shipping, primarily for rating marine chronometers. These signals usually took the form of a time ball, or similar mechanism that was mounted at a prominent point within a dockyard or on a headland. The signal was prepared a few minutes prior to a pre-determined hour (often one o'clock) as a preparatory signal, and automatically activated exactly on the hour, by contacts within the clock mechanism. Traditionally the clock was kept to time by a nearby observatory finding time through the observation of the transit of stars, a relatively complicated, costly, and time-consuming process. With the advent of the galvanic telegraph, it became possible to transmit time signals to remote points from one central point almost instantaneously. In this case, the central point was probably the mean solar standard clock at the Royal Observatory Greenwich. The Greenwich signal could be used to directly activate remote signals or devices, such as the timeball at Deal, in Kent, England, but problems with reliability of the telegraph line prevented this direct system from being widely adopted. A more reliable, but slightly less precise system was devised that used the Greenwich signal, or latterly a radio signal to correct a remote precision clock (regulator) such as this, that in turn would activate the nearby signal. This way, if the Greenwich signal failed, the remote clock would continue running, without correction until the Greenwich signal could be re-established.

At a pre-determined time (normally ten o'clock), contacts on the Greenwich or a similar remote observatory Mean Solar Standard (master) clock would automatically close, sending an electrical impulse to the remote clock (in this case, at Gibraltar). This activated a solenoid within the rear portion of the Gibraltar clock case, releasing an auxiliary pendulum (the pendulum would have been placed on the latch a short while before). On being released, the auxiliary pendulum was allowed to swing freely, behind the primary pendulum. Although the auxiliary pendulum was not impulsed in any way, it would continue to swing without its arc diminishing appreciably for many minutes.

An attendant standing by this clock at the time of release would note whether the clock was fast or slow of the Greenwich signal. A difference in phase between the auxiliary and primary (normal) pendulums of the remote clock at the time of release would indicate error. The attendant would then bring the primary pendulum into synchronisation with the auxiliary pendulum, by means of the electro-magnetic corrector operated by an external switch and power source. When both pendulums swung in exact synchronisation, the clock had been brought to time and the current to the electro-magnets would be switched off. Later the same day (normally one or more hours and twenty seconds after the initial release), the third set of contacts on the remote clock (described above) were automatically closed, sending a return signal to Greenwich to confirm the clock had been brought to time.
Back to Search Results
Buy a print License an image
Share:
Link copied to your clipboard!