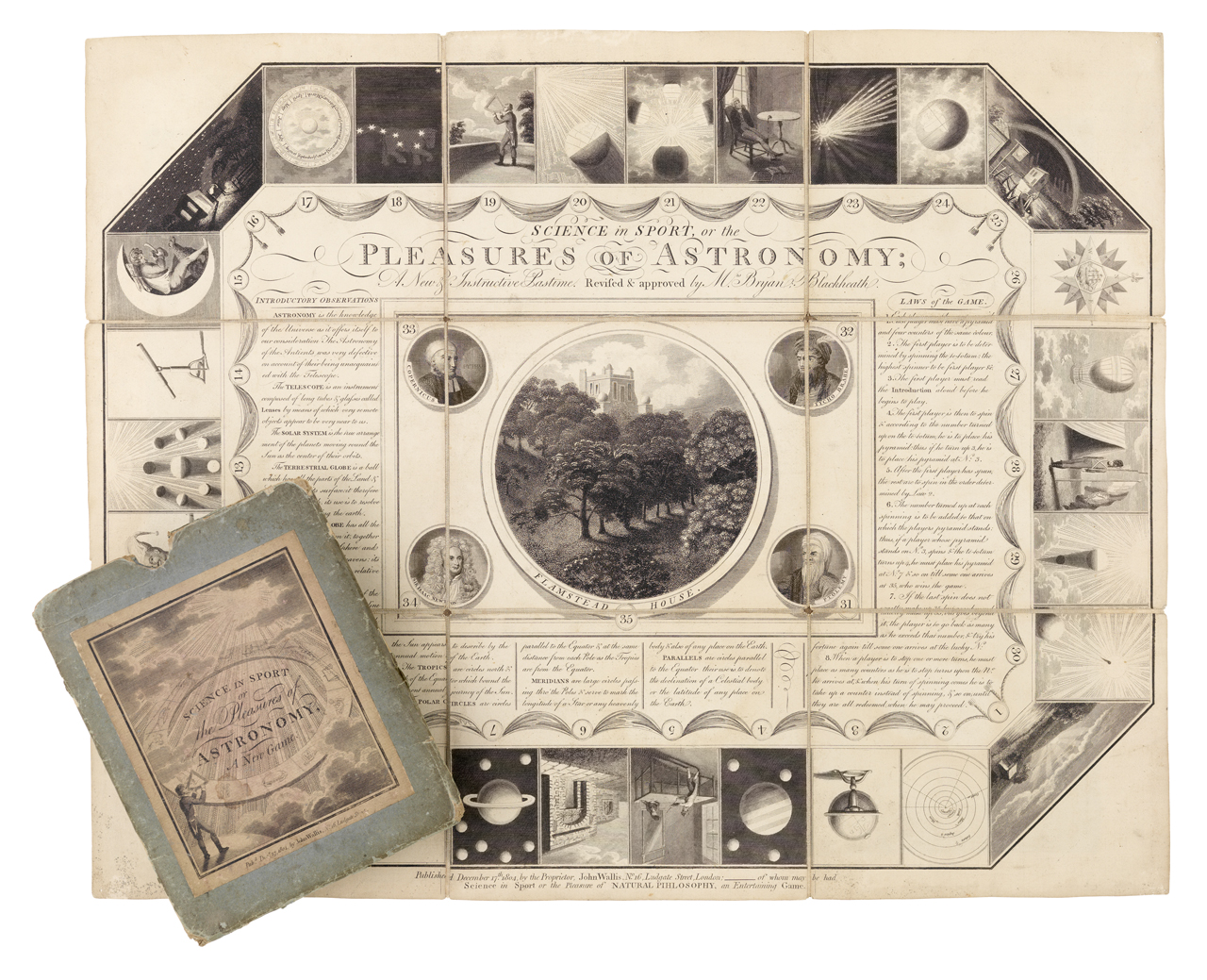 Science in Sport, or the Pleasures of Astronomy. A New Game

An astronomical board game, folded into cardboard slip case, entitled 'Science in Sport, or the Pleasures of Astronomy; A New & Instructive Pastime. Revised & approved by Mrs. Bryan; Blackheath', 'Published, December 17th 1804, by the Proprietor, John Wallis, No. 16, Ludgate Street, London:____ of whom may be had Science in Sport or the Pleasure of NATURAL PHILOSOPHY, an Entertaining Game.'

The game is based on the traditional Game of the Goose, which was adapted to a wide range of themed boards, many produced by John Wallis, one of the leading publishers of board games in the early 19th century. Margaret Bryan (fl. 1795-1816) ran a girl's school in Blackheath and was author of a number of popular works on science (ZBA4475 is her portrait), and Wallis evidently felt that her association with this game would be a testament to its accuracy, as well as highlighting its suitability for girls' education.

The board has 35 numbered 'squares' depicting astronomical objects, instruments and principles as well as astronomers (Ptolemy, Tycho Brahe, Nicholas Copernicus, Isaac Newton) and moral lessons (e.g. a studious and idle boy, the county gaol and an army volunteer). One square shows the man in the moon as an example of ignorance in astronomy. By spinning a 'te-totum', players can travel over the board, the object being to spin numbers up to 35 and reach the final 'square', depicting Flamsteed House: 'Whoever first arrives here is to take the title of Astronomer Royal'. The game involves much rote learning as well as moral lessons en route: within the rules of the game accuracy of knowledge and zeal are rewarded, while ignorance and idleness are punished. The requirements of each square and its consequences were recorded in an accompanying booklet, although this has been lost from this edition.

This copy of the game belonged to William Proctor, the father of the astronomer and writer on science, Richard A. Proctor (1837-1888).
Back to Search Results
Buy a print License an image
Share:
Link copied to your clipboard!