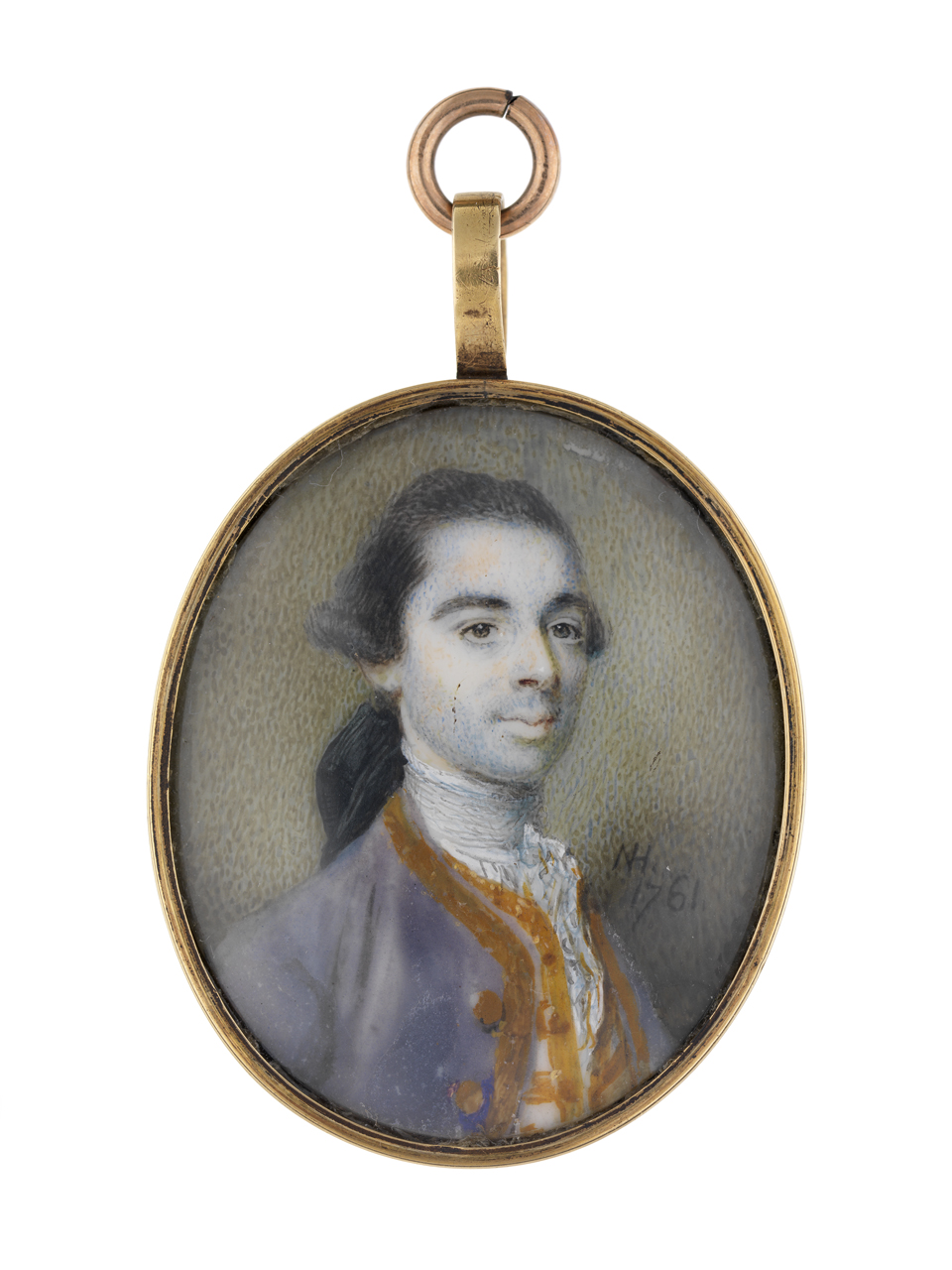 (Updated, February 2017) Oval bust-length miniature in watercolour on ivory, in an oval gilt metal suspension locket, signed with initials and dated 'NH / del 1761'. The slightly convex backplate of the frame is engraved 'Lieut. Charles Besson / R.N.' The sitter is half-turned to his left, in the 1748-67 lieutenant's full dress. He has dark hair tied with a black queue ribbon behind. The braid of the uniform appears to be in body colour (gouache) and the pigments of what must have been a finely coloured example have been rather faded by light exposure.

Charles Besson was commissioned lieutenant on 27 October 1758 but there is so far no further record of active service for him. The latest information on him is when he makes his final appearance in the 'Navy List' for March 1822 as one of the eight Lieutenants of Greenwich Hospital. He had been replaced when the June issue appeared, probably because no longer able to perform the light duties of the post from illness and/or sheer old age, since he did not die until 22 September. Going back, he was at Greenwich when Steel's 'Navy List' (forerunner of the official one) first began to list the Hospital captains and lieutenants in 1794, and was senior lieutenant from at least as early as 1804 when it appears to start listing them fairly reliably in seniority order. According to a note on Besson in an article on the reform of Greenwich Hospital in the 'United Service Magazine' for 1861 (part II, p. 515) he was appointed at the age of 22, having lost a leg aged 21 almost immediately after being commissioned although how is not yet known but probably in some meritorious circumstance early in the Seven Years War. At the time of his death he was the longest-ever serving Hospital lieutenant (63 years) and was aged 85, which places his probable year of birth as 1737 and that of his arrival at Greenwich as 1759. In 1761 he married Elizabeth Nutt , the widow of Captain Justinian Nutt (d. 1757), one of the four captains of Greenwich Hospital from 1754: for portraits of the Nutts of about 1750, see BHC2915 and BHC2916. Besson's will, made in 1811 with several later codicils, shows he was a man who lived comfortably there in terms of his possessions, since Elizabeth (who died in 1797) was herself a woman of some fortune, and one of the codicils leaves bequests to later members of the Nutt family as tokens of his affectionate regard for them. The 1761 date of this miniature suggests it may have been made in connection with the sitter's marriage, possibly for his wife. The 1861 'United Service' magazine piece above further noted that the also one-legged Lieutenant Frederick Bedford, born in 1779 and at Greenwich from 1802, was then approaching Besson's longevity there: he did not match it since he died in 1862, but was still by far the second-longest-serving Hospital lieutenant.

Hone was an Irish-born portrait painter and miniaturist, including in enamel, and also an engraver of his own work. He had a successful practice in London and was one of the two Irish founder members of the Royal Academy in 1768.
Back to Search Results
Buy a print License an image
Share:
Link copied to your clipboard!