John Dee (1527-1609) was a philosopher and scholar whose work during the Tudor period has been overshadowed by his alleged sorcerous and occultist activities. He is best known for having conversations with angels through his scryer Edward Kelley, his interests in astrology, alchemy, calendar reform and suggesting the date for Queen Elizabeth I’s coronation. What John Dee may not be as well-known for is his influence on English navigation and being the first person to coin the term ‘British Empire’.

Through the use of rare and new books from our collection, which you can see on request at the Caird Library and Archive of Royal Museums Greenwich, this post gives you a flavour of the lesser known ideas that John Dee sought to implement in the latter part of the Tudor period. 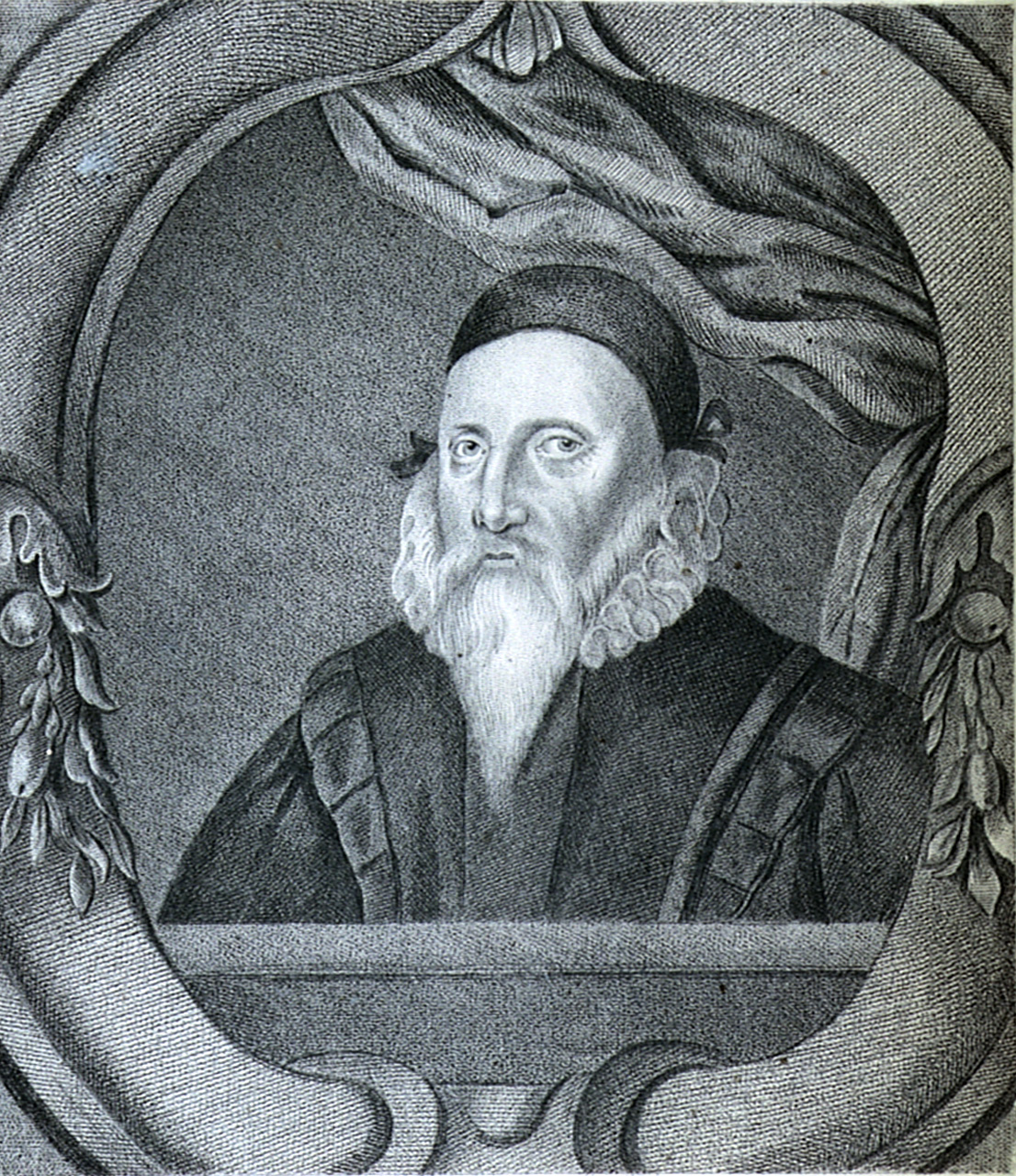 Navigation and mathematics during the Tudor period

Navigational knowledge in England in the mid-16th century was limited compared to other European nations. Most trading from England extended as far as Iceland and the coastal regions of the Low Countries, but very rarely to further places such as the Azores, Mediterranean and the Baltic region. It largely relied on the art of pilotage, which focused on, as historian David Waters argues ‘knowing perfectly by sight all the capes, ports and rivers met with, how they rise up and how they appear from the sea’.

Navigation of the oceans however required an understanding of mathematics. Historian Benjamin Wooley argues  that some circles in Tudor society were suspicious of a subject which analysed the relationship between numbers and the stars, seeing it as a gateway to demonic magic. As a result, many mathematical texts were burned in the Tudor Period. This suspicion of mathematics was connected to a perception that, because we  had everything we needed either at home or within a short journey to coastal areas of Europe, there was no interest in expanding navigation in its broader sense through the use of mathematics.

This attitude starts to change from the mid-16th century onwards. Already a keen astrologer, John Dee’s studies abroad at Louvain University had led him into contact with famed cosmographers such as Gemma Frisius and cartographer Gerardus Mercator, which deepened his mathematical knowledge. Mercator and Dee established such a rapport that Dee brought back two of Mercator’s globes and various astronomical instruments and gave them to Cambridge University to be used by their scholars and fellows. Sadly these instruments no longer exist.

This stimulated more scholars to learn further about navigation and encouraged others to petition the government for more funding and education. Influential courtiers and explorers such as Humphrey Gilbert petitioned for the founding of an ‘Academy in London for education of her Majesty’s wards and others the youth of nobility and gentlemen’. Gilbert believed that this academy, amongst other things, could be used for training future servants of the Crown in arithmetic, geometry, cosmography, cartography and the art of navigation.

Dee, in his capacity as navigational tutor for the traders of the Muscovy Company and in lectures to his students at his house in Mortlake, had already been teaching what Gilbert was asking for since the mid-1560s. He was able to advocate mathematics (and by association navigation) to a larger audience by writing the preface to the first English translation by Henry Billingsley of the Greek mathematician Euclid’s work ‘Elements of Geometry (1570)’. 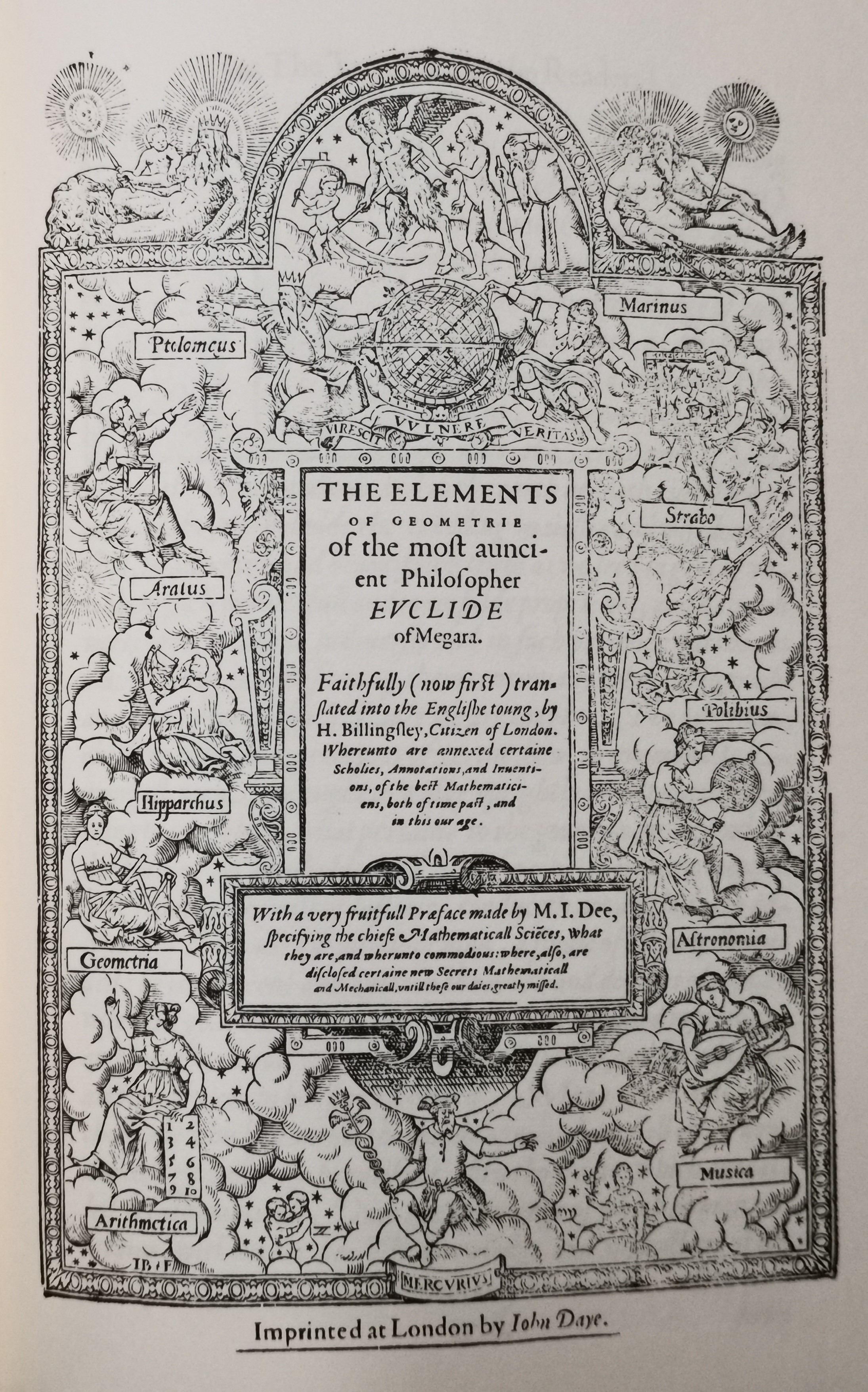 Title page for The mathematical Preface to the elements of geometrie of Euclid of Megara 1570 (RMG ID: PBD0532)

In his Mathematical Preface Dee classifies the mathematical arts and provides definitions for each. He defines navigation as ‘how by the shortest good way, by the aptest direction, and in the shortest time, a sufficient ship… be conducted’. This, along with definitions for geography, hydrography and astronomy, was intended to show that mathematics had many uses in the world such as surveying and making mechanisms - Dee is said to have made a giant mechanical beetle for a play while he was a student at Cambridge, which reputedly amazed the audience.

Dee also used the text to argue that mathematics did not necessarily deserve its wicked reputation.

“How many a common artificer, is there, in these realms of England and Ireland, that dealeth with Number, Rule, & Cumpasse: Who with their owne Skill and experience, already had, will be hable (by these good helps an information) to finde out and deuise, new works, strange Engines, and Instrumentes: for sundry purposes in the Common Wealth? or for private pleasure? And for the better maintaining of their owne estate?”.

Although this preface would fade into obscurity somewhat, it was widely read by many in the 17th century, including natural philosopher John Wilkins who, inspired by Dee’s work, wrote ‘Mathematical Magick’, one of Isaac Newton’s favourite books.

Around the time that the Mathematical Preface was published, the discoveries of commodities such as gold and spices were helping to increase the wealth and influence of continental powers such as Spain and Portugal. Riddled with debt and faced with increasing competition in trade, partially due to the loss of the English trading port of Calais during Queen Mary’s reign, England was becoming more aware of the shortfalls of an island that needed to extend its outlook away from the Continent and towards the virtually untapped new world of North America.

Dee had another opportunity to link navigation with Britain’s imperial ambitions through his book ‘The General and Rare Memorials pertayning to the Perfect Arte of Navigation (1577)’. It is a text that has faded into obscurity, and its influence is hard to measure since most Tudor histories do not comment on it.  It is significant however, because it is one of the first references in print to the idea of a British Empire. Dee wrote four volumes under this name but, unfortunately, only the first survives in a complete form in various libraries and archives, including our own Caird Library.

In this book, Dee presents his arguments for building and financing a large navy. England was one of the few countries with a standing fleet of military ships. This fleet comprised only 34 ships (less than 20% of the size of Spain’s fleet) however, nearly a third of which were not worth maintaining by the time Elizabeth I came to the throne. Dee calls the expansion of this fleet the ‘Master Key’ of the British Empire and lists a wide variety of benefits such as:

Despite the focus on navigation in this book, Dee’s fascination with astrology and symbolism permeates the work. Through various sources, Dee believed part of North America held by the Spanish had already been previously colonised by the English, first by Arthur, King of the Britons in 530 AD and secondly by the Welsh Prince Madoc Owain Gwynedd in 1170 AD. By colonising North America, Dee believed England would be restoring the Empire of Arthur. The symbolism is most prevalent in a hieroglyph that appears on the title page of General Memorials. 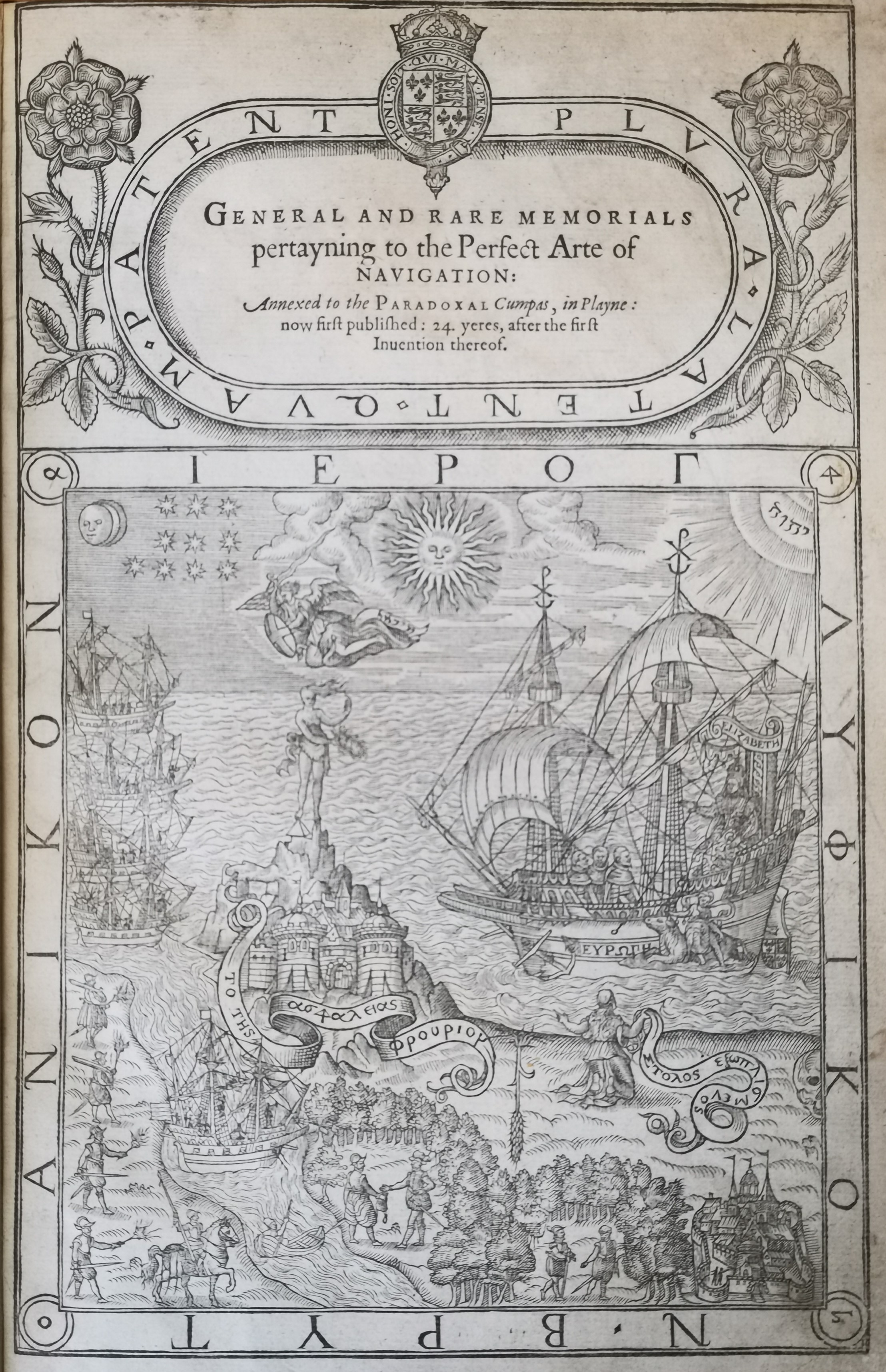 Title page of The General and Rare Memorials pertayning to the Perfect Arte of Navigation (1577) (RMG ID: PBD3580)

It shows Queen Elizabeth at the helm of a ship looking over lands that have been absorbed into the new British Empire. Dee goes even further in this hieroglyph by having the Moon, Sun, stars and a glowing sphere bearing the tetragrammaton, a set of four Hebrew letters representing the name of God. All of these symbols on the page are designed to suggest that Elizabeth’s ambitions had divine blessing.

Elizabeth herself did not endorse Dee’s proposals publicly, fearing Spanish and Portuguese reprisals. Some of the Elizabethan court were also uncomfortable with Dee’s interest in astrology and the occult. The Queen did however privately enable others to explore the Americas, possibly influenced by Dee’s text. Elizabeth’s private encouragement led to numerous expeditions during the latter part of her reign (including Martin Frobisher’s expeditions of the late 1570s which Dee supported financially and as a navigational adviser) and also a colonisation attempt at Roanoke Island in America at the turn of the 17th century. 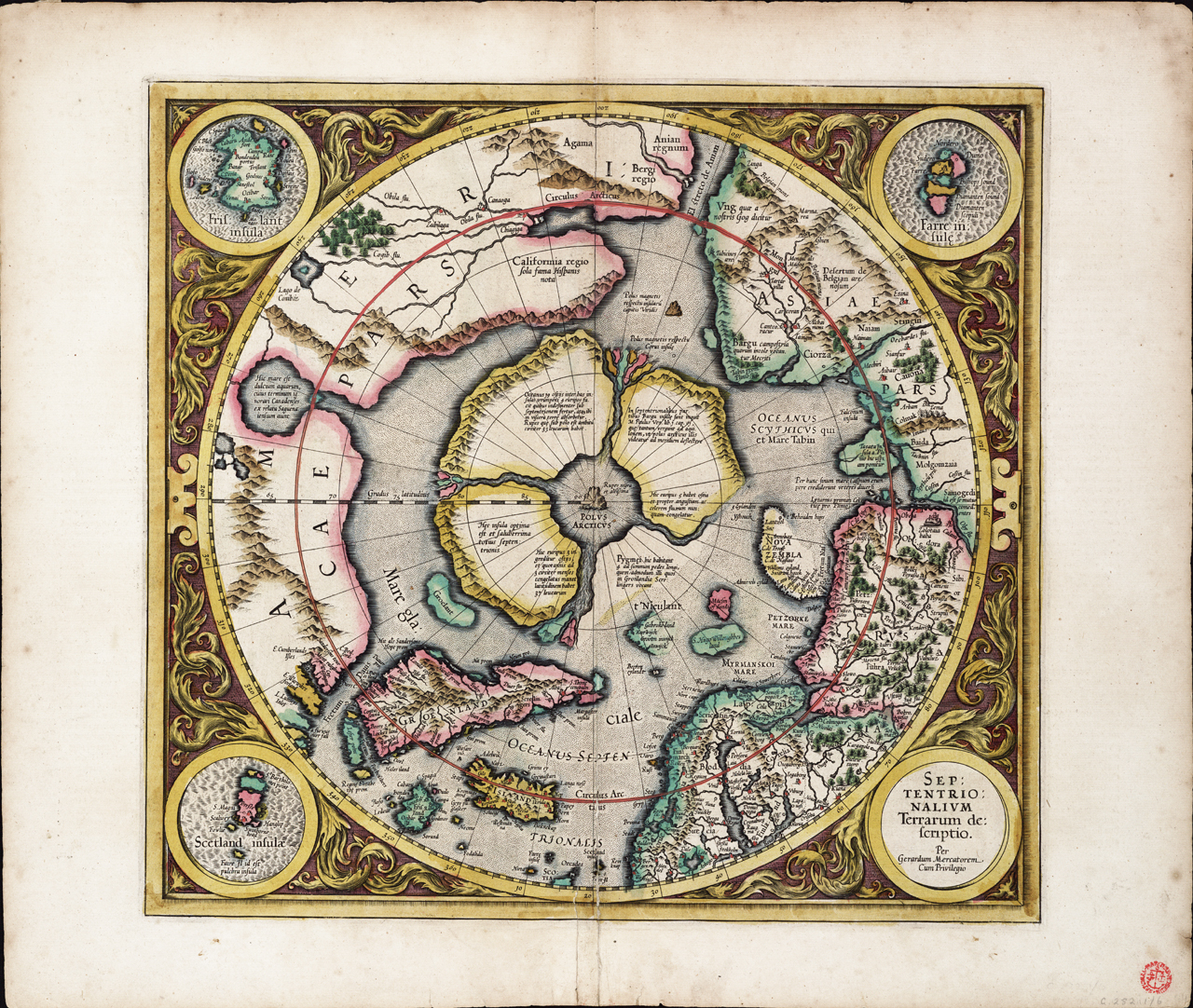 John Dee’s renown as a mathematician and proponent of navigation would be overshadowed by his reputation as a sorcerer and his involvement with occultist activities. Although many of his ideas were not accepted, others did make a contribution in laying the foundations for Britain’s imperial ambitions. The Mathematical Preface helped encourage a new generation of mathematicians in the late 16th century and General Memorials can be seen as an early propaganda piece for the navy and for England’s role in a changing world.

To coincide with this blog post, I shall be presenting these items as part of our annual Caird Library Open Day. See these, and many more on display on Saturday 20 July 2019, where we showcase the hidden treasures of the world’s greatest maritime library.

Waters, David, The Art of Navigation in England in Elizabethan and Early Stuart Times (1978) Trustees of the National Maritime Museum, Greenwich