Skip to main content
You are here:
Home Discover our stories and collections Explore by theme The James Webb Space Telescope vs the Hubble Space Telescope

What are the main differences between Hubble and the new James Webb Space Telescope?

The James Webb Space Telescope is planned to be launched by NASA in Spring 2019. It has often been referred to as the successor to the Hubble Space Telescope, launched in 1990, aiming to “complement and extend” its predecessor’s discoveries. However, NASA say that it is unfair to call the James Webb a direct replacement because of the several key differences between each instrument...

What type of light do the telescopes see?

Light travels in a range of frequencies along the electromagnetic spectrum. Our eyes have evolved to detect the band of the spectrum which is known as ‘visible light’ which is unsurprising given that our atmosphere blocks out many of the other wavelengths. However, there are many other forms of light we cannot see both inside and outside our atmosphere.

Infrared light has a longer wavelength and can pass through objects in space that visible light is blocked by, such as gas and dust. This is why images taken using telescopes which detect infrared frequencies can pick out objects beyond these clouds and appear clearer than those taken using other telescopes. 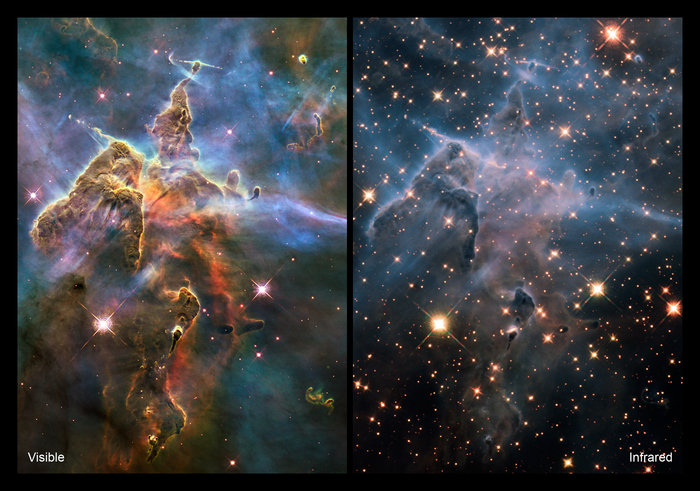 How big are the Hubble and James Webb Space Telescopes?

What are the distances between the telescopes and Earth?

Photographing objects in space poses many challenges. Images we capture of space from Earth-bound telescopes usually show distortion because of the way pockets of hot and cold gas in the Earth’s atmosphere affect light passing through. This is why the stars seem to twinkle in the night sky. Hubble was originally launched into orbit around the Earth in 1990 to avoid this distortion.

Nowadays we have developed technology to avoid this problem. But we will still be sending the James Webb Space Telescope out 1.5 million km from the Earth so that its infrared detectors don’t pick up heat from the Earth. Because it will be so far out, NASA won’t be able to launch any maintenance missions on James Webb like they did with Hubble.

James Webb will be placed at that specific distance because this is the ‘Lagrange point’: where the gravity of the Earth and Sun are equal. This makes it easier to keep James Webb in a stable, predictable orbit around the Sun, which is important for tracking and pointing the telescope.

How far back in time can the James Webb Space Telescope see?

The further away an object is the further back in time we are looking because of the time it takes light to travel. When we look at objects through an advanced telescope we're seeing these objects almost as they were when the light first left them 13.6 billion years ago.

With its ability to view the Universe in longer wavelength infrared light, James Webb will be capable of seeing some of the most distant galaxies in our Universe, further than the visible/ultraviolet light view of Hubble. This is because light from distant objects is stretched out by the expansion of our Universe, and effect known as redshift. As such, while Hubble was able to view “toddler” galaxies, James Webb will begin to peer back to their birth.

Special
What's on at the Peter Harrison Planetarium
Following guidance received from the UK Government to minimise social contact...

Shop
Guide To The Night Sky 2019
A month-by-month guide to exploring the skies above Britain and Ireland....

What has the Hubble Space Telescope discovered?

The history of the telescope