Complete with historic architecture and parkland vistas, it’s easy to see why Greenwich is a popular location for film crews.

The Royal Borough has made appearances in many of the film and television industry’s biggest releases, from superhero blockbusters to period dramas and Ocsar-winning films.

Set off on this self-guided trail around the UNESCO World Heritage Site of Maritime Greenwich to uncover some of the area’s most iconic filming locations.

Head to the Queen’s House, located at the edge of Greenwich Park, for the first stop along the trail. One of the biggest hits of 2020, Netflix’s drama series Bridgerton used the Queen’s House – the home of King James I’s wife, Anne of Denmark – for several scenes in season one.

In episode three, the front façade of Inigo Jones’s classical masterpiece doubles as the exterior of Somerset House and the setting for a grand ball attended by Prince Friedrich of Prussia. Carriages and horses stand outside the entrance, the staircase is bedecked with flowers, and debutantes in bright ballgowns vie for the prince’s attention.

After taking in the exterior of the Queen’s House, wander through the picturesque colonnades on either side of the building. Eagle-eyed fans may recognise this spot as the place where the Duke of Hastings fights with Lord Berbrooke in episode two.

Head inside the Queen's House and walk in royal footsteps – both real and fictional.

Season four of The Crown used the Tulip Stairs among numerous Greenwich landmarks. You can catch a glimpse of the Queen's House iconic spiral staircase in the trailer above, as Princess Diana runs through an eerily deserted palace. 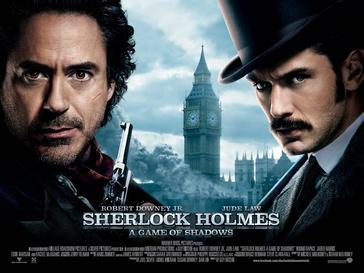 Sherlock Holmes: A Game of Shadows

Head back outside the Queen's House and down the steps into the arched carriageway. Transformed into the dangerous world of Victorian London for Sherlock Holmes: A Game of Shadows, this location was used in the opening fight scene between Sherlock Holmes and four men.

In an adrenaline-fuelled sequence, Holmes is set upon by the group: he is chained to wooden railings, strangled and nearly bludgeoned with a crate. Following a pause in the action, Holmes foresees the men’s next moves and successfully overpowers them.

If any franchise knows how to do battles in style, it’s the Marvel Cinematic Universe. For the next stop along the trail, cross Romney Road and head through the gates into the grounds of the Old Royal Naval College.

In the lead-up to the climactic battle between Thor and the Dark Elves, a portal opens up above the site. Framed by the domes of Sir Christopher Wren’s baroque buildings and the backdrop of the Queen’s House, the superhero Thor engages in combat with Malekith, the ruler of the Dark Elves. Carnage ensues: cars are flipped, windows broken and pillars smashed. What would Wren have made of this fantastical fight scene? 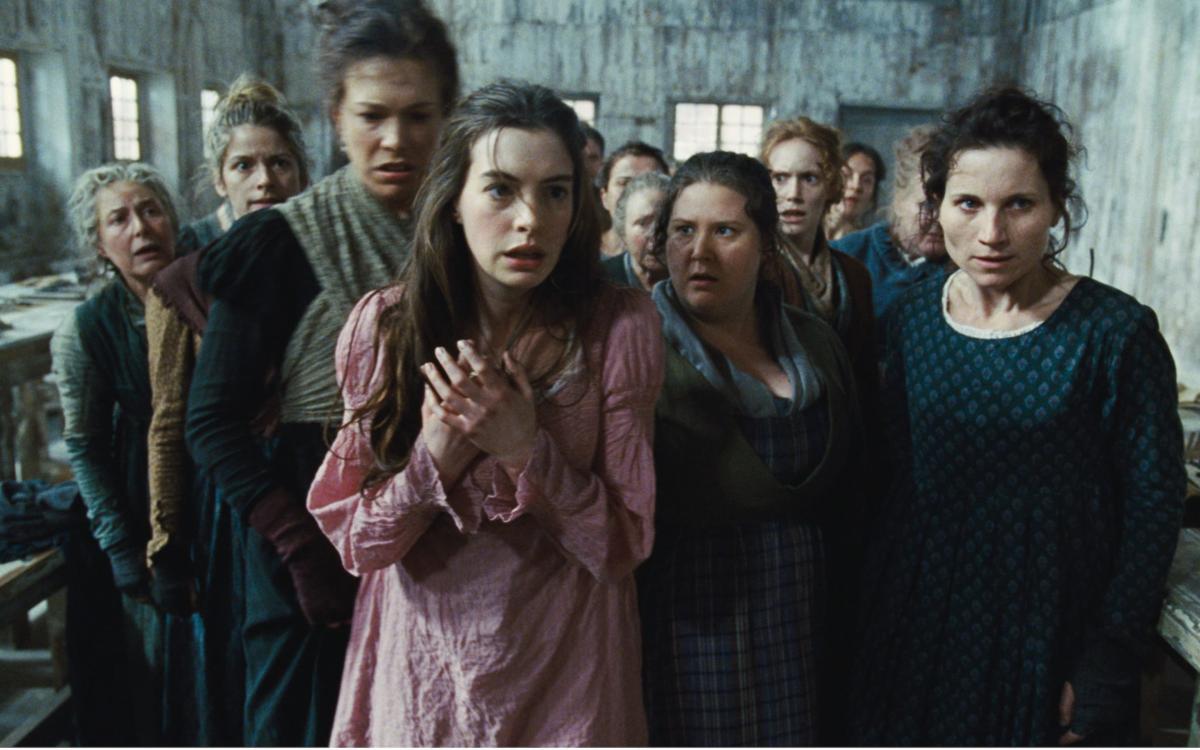 Continue to walk around the grounds of the Old Royal Naval College, which has been transformed on numerous occasions in recent film and TV history. During the film adaptation of West End hit Les Misérables for example, the area morphed into revolutionary Paris.

A towering barricade was constructed out of items including chairs, staircases and carriage wheels. The production also recreated the Elephant of the Bastille – the Parisian monument conceived by Napoleon.

Pirates of the Caribbean: On Stranger Tides

Fans of Pirates of the Caribbean may also recognise a familiar location here from the fourth instalment On Stranger Tides. In the opening scenes, Jack Sparrow is involved in an action-packed chase through the streets of London.

Filmed in the grounds of the Old Royal Naval College, the sequence sees the trickster pirate leaping between moving carriages, in an attempt to escape the guards.

The area has also been featured in several royal television shows and movies. In Netflix's The Crown, the site stood in for the exterior of Buckingham Palace, while in The King’s Speech the area was turned into war-torn London.

For series five of the BBC’s historical drama, Poldark, the Old Royal Naval College doubled as the Westminster area of London. 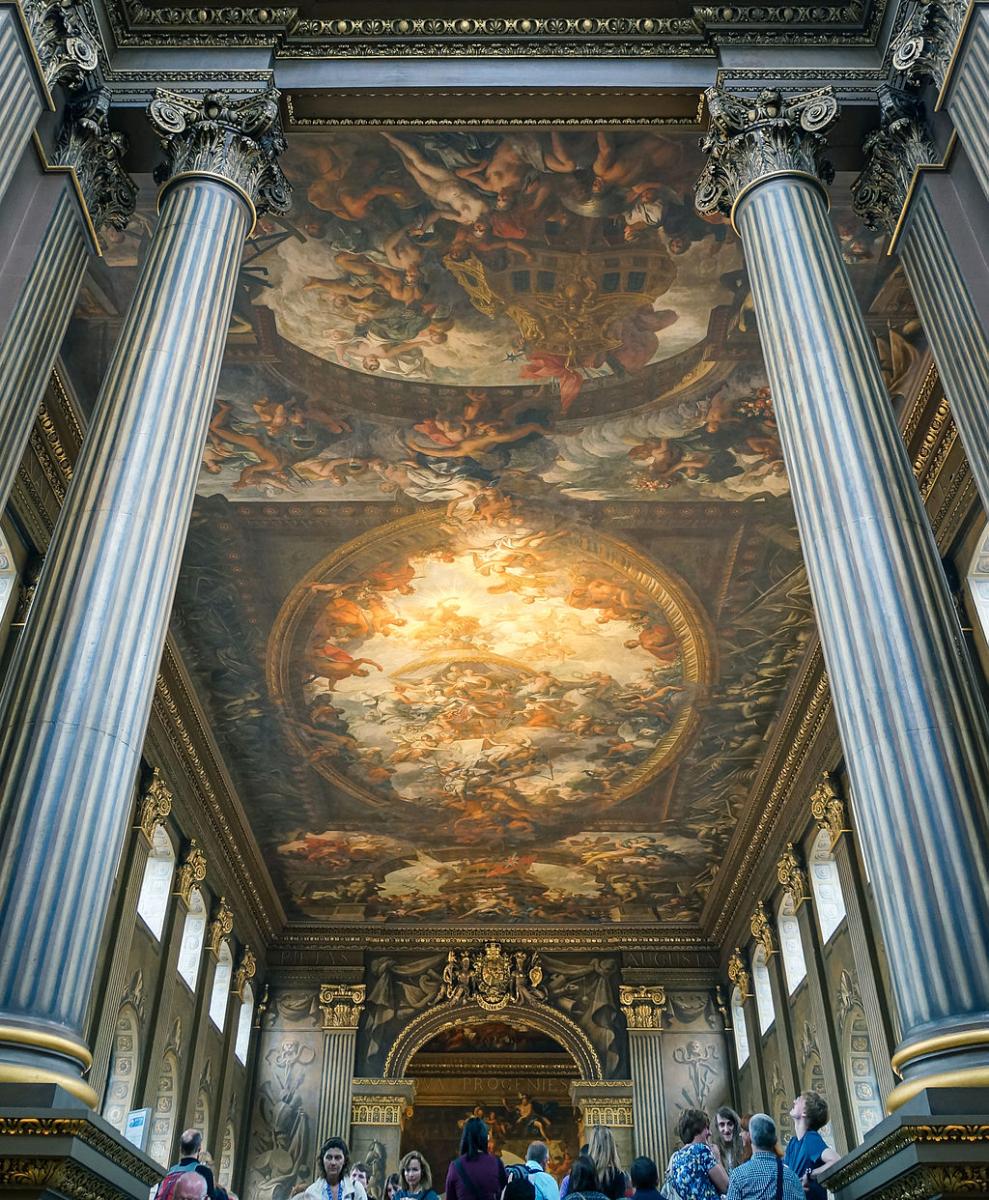 Make your way to the Painted Hall, located within the Old Royal Naval College complex. Known as ‘Britain’s Sistine Chapel,’ it features mural paintings by artist Sir James Thornhill. In Lara Croft: Tomb Raider, this spectacular setting was used for the council of the Illuminati.

Disney lovers may also recognise the Painted Hall from Cinderella, the live- action adaptation of Walt Disney’s animated film. The Hall was used as one of the rooms in the palace, where Prince Kit and his men practise their fencing skills.

Four Weddings and a Funeral

Head out of the Painted Hall and walk across to the Chapel of St Peter and St Paul, also located within the Old Royal Naval College site.

With a history stretching back to the Tudor period, this intimate chapel was used for the fictional St Mary of the Fields, Cripplegate, the location of the second wedding in the romantic comedy Four Weddings and a Funeral. The scene sees the nervous Father Gerald fumble his way through the wedding service of Bernard and Lydia.

Make sure to look up at the Chapel’s ceiling, which features a neo-classical design of squares and octagons, created by 18th century plasterer John Papworth. 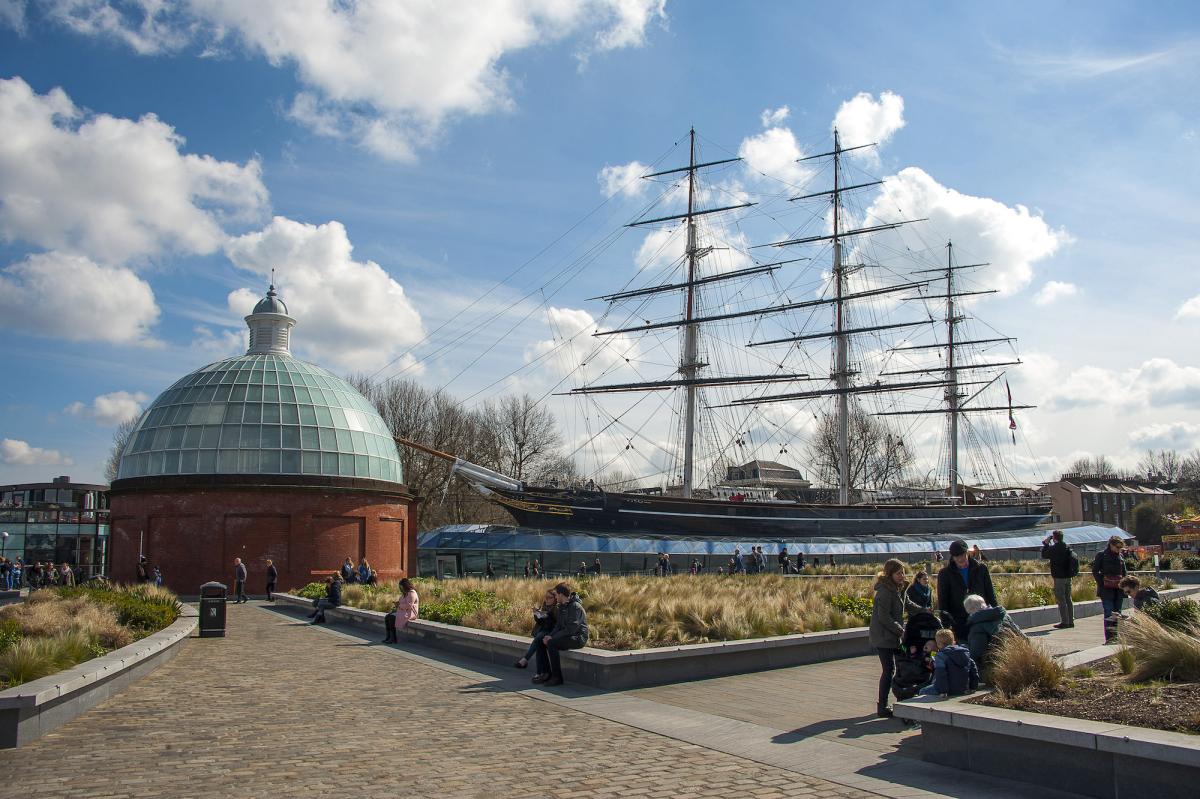 When you’ve finished exploring, why not see more of Greenwich? Whether you want to step aboard Cutty Sark, the historic sailing ship, visit the home of Greenwich Mean Time at the Royal Observatory or uncover stories of exploration at the National Maritime Museum, there’s plenty to discover.