See the "Our Moon" category winners of the Insight Investment Astronomy Photographer of the Year 2017 competition.

Each year this category is inevitably replete with images that hark back to astronaut Buzz Aldrin’s famous description of the Moon’s surface as ‘magnificent desolation’. These vistas with their deep, dark shadows exaggerate the craters, mountains and valleys of the rugged lunar landscape. However, this year, these impressive images in a typical stark grey palette are joined by several vivid, brightly coloured views that give us alternative perspectives.

The Moon is, and always will be, the celestial object that we are most drawn to. It is great to see astrophotographers worldwide continuing to experiment with how they capture this icon of the skies.

In this hyper-saturated picture, a new face of the lunar surface is revealed. On the brownish terra, the crater and its ray system appear as blue-white structures that extend over a thousand miles. The Tycho Crater itself has a bluish shade, which is characteristic of the youngest craters on the Moon.

“What I love about this image is how the photographer’s technical skill and artistic eye have come together to create an arresting and unusual take on one of the most recognizable craters on the Moon. This type of saturation-boosted image can be tricky to do well, and this is one of the best examples of its kind I’ve ever seen.”

Evening in the Ptolemaeus and Rupes Recta Region

Dominating the south central lunar face is the magnificent chain of walled plains: Ptolemaeus, Alphonsus and Arzachel. Walled plains are simply large impact craters whose floors have been filled with lava, obliterating many traces of the original floor and central elevation. In the bottom part of this composite image (made up of two individual pictures) is Ptolemaeus, an ancient crater with no central peak but with multiple smaller craters across its floor surface. Above Ptolemaeus is Alphonsus, which also contains several craterlets on its floor. Additionally, it has a central peak and contains Rimae Alphonsus, a network of narrow rilles, or ancient lava channels, on the left side of its floor. Above Alphonsus, Arzachel makes a superb addition to the Ptolemaeus chain, with terraced walls, a large central elevation, and a floor containing a cleft and several large craterlets. Above and to the right of Arzachel is Rupes Recta (meaning ‘Straight Wall’, a large linear fault) and to its right are the crater Birt and the Rima Birt rille.

“I love the intricate detail revealed in the craters and mountains of this landscape as the sun sinks below the lunar horizon. The creeping onset of darkness lends the image an ominous feel.” 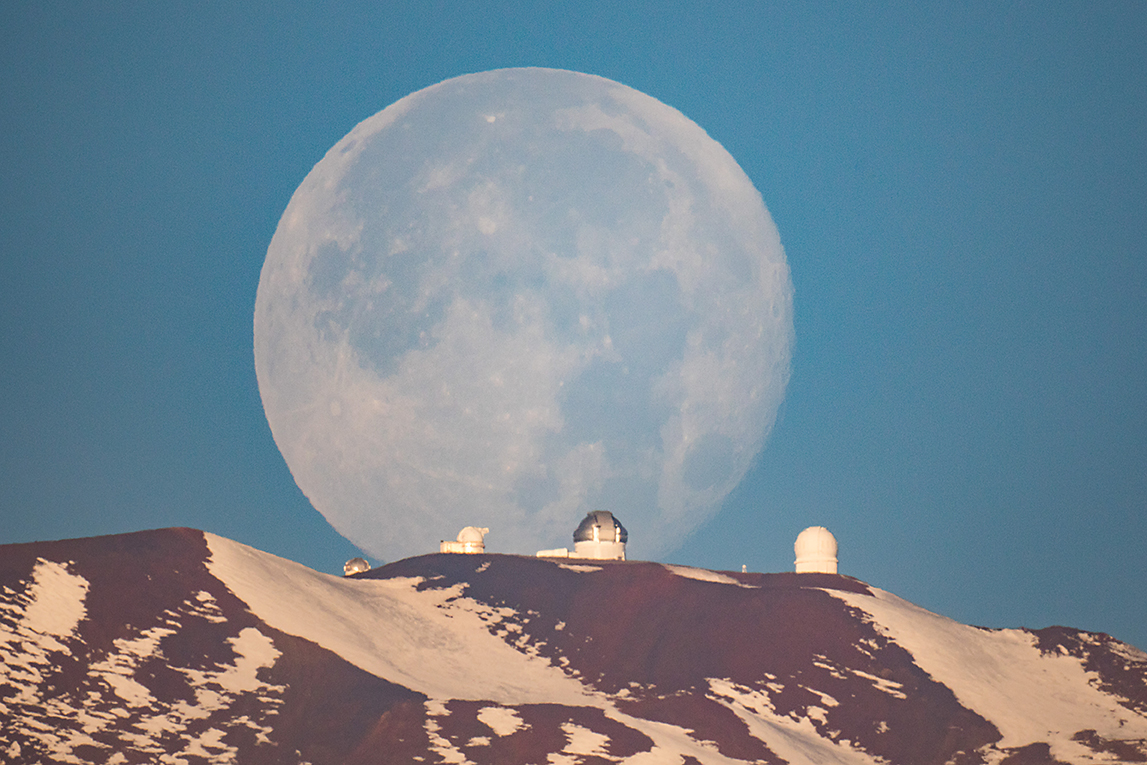 "This is a single exposure. There was no compositing. It was shot 30 miles from the mountain with a 1600 mm equivalent focal length. I don’t Photoshop in moons, they are 100% natural, organic, and gluten-free! I’ve had the idea of shooting a giant Moon behind the telescopes of Mauna Kea for a while. I tested out cameras on some backyard telescopes, but the vignetting and sharpness were really poor, so I bought a 1970s vintage Nikon 1,000 mm f/11 mirror lens off eBay. After several months of waiting for clear skies (it’s nearly always cloudy in Hilo, where this was taken from), I had an opportunity to photograph the Full Moon setting at sunrise. This is a still frame from a timelapse video. The telescopes are, from left to right, the UK Infrared Telescope, the University of Hawaii 2.2 m telescope, Gemini North, and Canada France Hawaii Telescope. Despite being in Hawaii, Mauna Kea is tall enough (4,200m) to accumulate snow during the winter."

“A lot of planning clearly went into this shot to capture the Moon in exactly the right position. Many professional astronomers will recognize the suite of world-class telescopes ranged along the skyline.”

Insight Astronomy Photographer of the Year 2016 Our Moon...