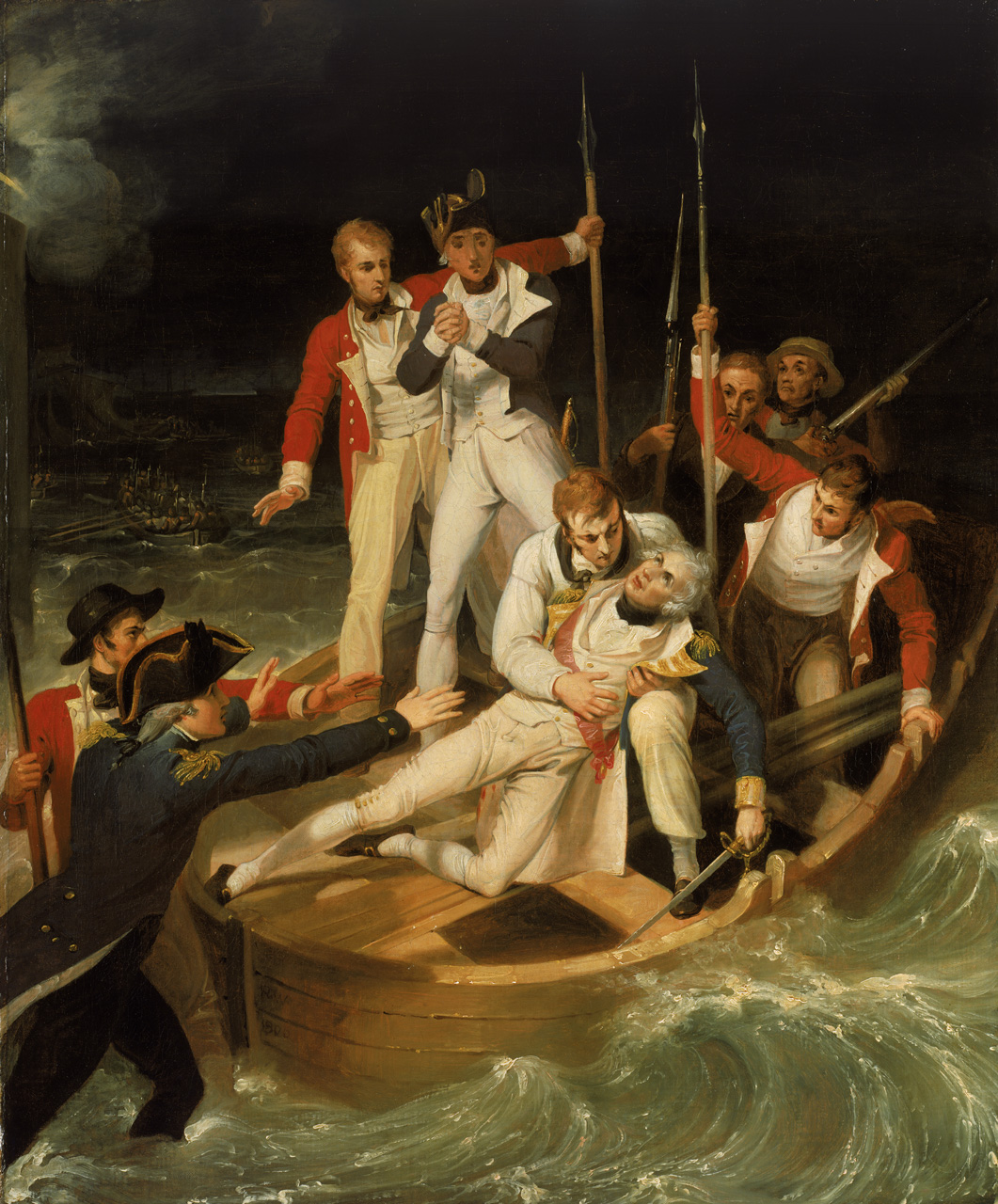 After the Battle of Cape St Vincent, 14 February 1797, Nelson was stationed off Cadiz and was ordered to take possession of the town and harbour of Santa Cruz in Tenerife, where Spanish treasure ships were reported to be lying. He immediately set sail with three ships of the line, three frigates, and a cutter and was joined by a fourth frigate and a bomb vessel en route. After several failed attempts Nelson decided upon a direct assault on Santa Cruz by night, aiming for the central castle of San Cristobal where the Spanish general staff were based. Nelson commanded the attack, leading one of six divisions of boats, the other five being commanded by Captains Troubridge, Miller, Hood, Waller and Thompson. At 10.30 p.m. on 24 July, the British seamen and marines met around the 'Zealous' where they formed into six divisions and were roped together. With muffled oars they began the two-mile row to the mole. However, the initial boat-landings went wrong when many of them were swept off course and the element of surprise was lost. During his attempt to land Nelson was about to disembark when he was hit just above the right elbow by a musket or similar ball fired as grapeshot, which shattered the bone and joint. The arm was amputated aboard the 'Theseus' that night. The attack ground to a halt, the British force landed at the harbour negotiating a truce with the Spanish Governor under which they returned to their ships. The Spanish also offered hospital facilities for the wounded and to sell the squadron provisions.

In the painting, Nelson's barge is shown beached in the surf, in port-bow view. Hit on the point of landing he reeled and staggered back into the boat where he lies, having transferred his sword to his left hand. He is supported by a sailor and there is blood on the sailor's shirt and on the lining of Nelson's coat. Lieutenant Josiah Nisbet, Nelson's stepson, stands behind him and is saving his life by staunching the blood. Behind him and to the left are two other lieutenants. Also in the barge and to the right of the group is a third lieutenant grasping a boarding pike, with two sailors behind him. In the left foreground standing in the shallow water is Captain Thompson, arms outstretched towards Nelson, together with another lieutenant. In the left background is a bow view of another boat approaching the beach. In the right foreground the artist has used the waves to enhance the dramatic impact. Westall has conveyed the staged effect by employing a dramatic language of gesture and expression.

This painting of the incident was made in 1806. It was commissioned by John M'Arthur, as a plate for 'The Life of Admiral Lord Nelson, KB', which he published with James Stanier Clarke in 1809, and which was the first major biography of Nelson. Engraved by J. Neagle in 1809, it formed part of a series of five painted for the book by Westall, all intended to show Nelson's life as a series of heroic acts. With two by West, also used in the same way (BHC0566 and BHC2905), and Lemuel Abbott's best-known portrait of Nelson (BHC2889) all were presented to Greenwich Hospital in 1849 'by Jasper de St Croix, Esq., and several other patriotic individuals'.

The artist came from an English family of painters and illustrators, and was a book illustrator who turned to painting historical subjects. He was apprenticed in 1779 to John Thompson, a heraldic engraver in London. In his spare time he studied drawing at the Royal Academy Schools in 1785, became an ARA in 1792 and an RA in 1794. His last employment was as drawing master to Princess Victoria. Although his output was prolific, unfortunate picture dealings led him to poverty. The painting was exhibited at the Royal Academy in 1807 with the title, 'Admiral Sir Horatio Nelson in the act of Landing on the Mole of Teneriffe, in July 1797, dangerously wounded by a cannon-shot in his right arm, which was afterwards amputated. Upon this occasion, his life was saved by the attention and presence of mind of his son-in-law, now Captain Nesbit [sic]. Owing to the absence of this gentleman [i.e. when Westall was painting it] his portrait is left unfinished'. The painting is signed and dated 'R W 1806'.
Back to Search Results
Buy a print License an image
Share:
Link copied to your clipboard!