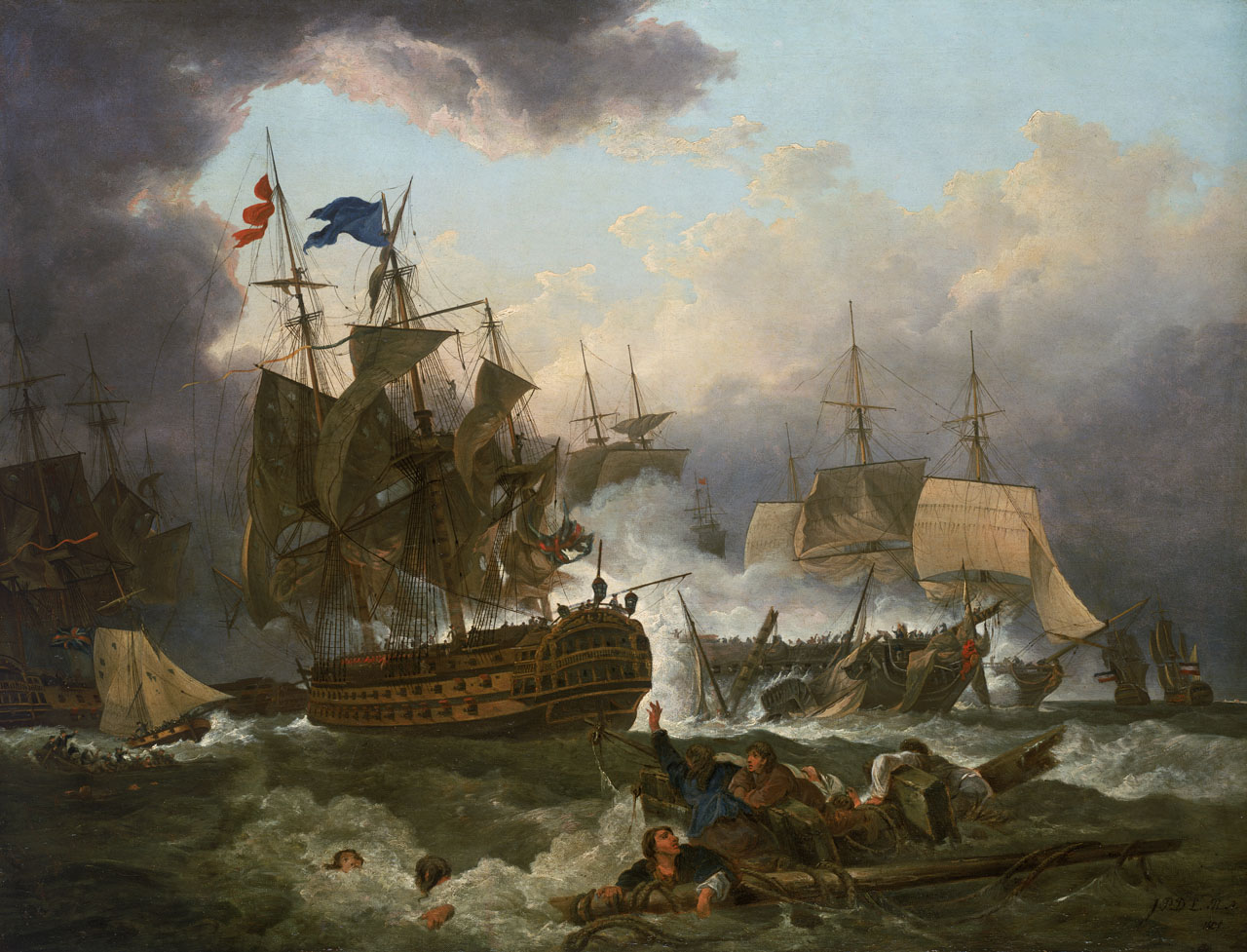 Off the coast of Holland, near Camperdown, on 11 October 1797, the British fleet defeated the Dutch, aligned with the Revolutionary French. Throughout the year the British Admiral Adam Duncan had been stationed watching the Dutch fleet in Den Helder. His difficulty maintaining this vigil was compounded by the events surrounding the Nore Mutiny in May. By early October the situation had sufficiently improved for Duncan to take his squadron back to Yarmouth to re-store and refit. The Dutch fleet took advantage of his absence and came out almost immediately. The British lookout still on station sent the cutter 'Black Joke' to warn Duncan of the Dutch threat. He rapidly put to sea and early in the morning of the 11 October the two fleets were in sight with the Dutch in close order 18 miles off their coast awaiting him. Action began at 12.30 and by 15.30 Duncan was able to send off a cutter with a dispatch to the Admiralty to say that 11 enemy ships had been taken. Duncan showed leadership by taking his flagship into action in difficult waters, although the battle was not tactically impressive. However it inspired his captains whose determination proved decisive against a resolute opponent.

The painting shows the Dutch flagship ‘Vryheid’ at the moment of her surrender.
In the foreground sailors in the water struggle to cling on to broken spars. To the left and beyond Admiral Duncan’s ship ‘Venerable’ is in action. During the battle, part of the ‘Venerable’s’ mast was felled which included the admiral's flag. The lowering of an Admiral's personal flag was always a sign of surrender. Despite intense gunfire, a sailor, Jack Crawford, climbed the mast to nail the colours to the main royal-mast of the ‘Venerable’. In the painting Crawford can clearly be seen in this heroic act. To the right and beyond the dismasted ‘Vryheid’ are the masts and sails of another British ship which is also engaged with the Dutch flagship. In the extreme right background two Dutch ships make their escape. The British cutter ‘Rose’ and an open boat are in the left background to the left of the ‘Venerable’. Beyond the cutter is a very damaged ship. This highly dramatised account is one of several versions of the same subject by the artist. An engraving of the version at the Tate Gallery was made and published by James Fittler in 1801. A key to the picture was also published. It is signed and dated ‘J.P.D.L.R.A. 1801’.
Back to Search Results
Buy a print License an image
Share:
Link copied to your clipboard!