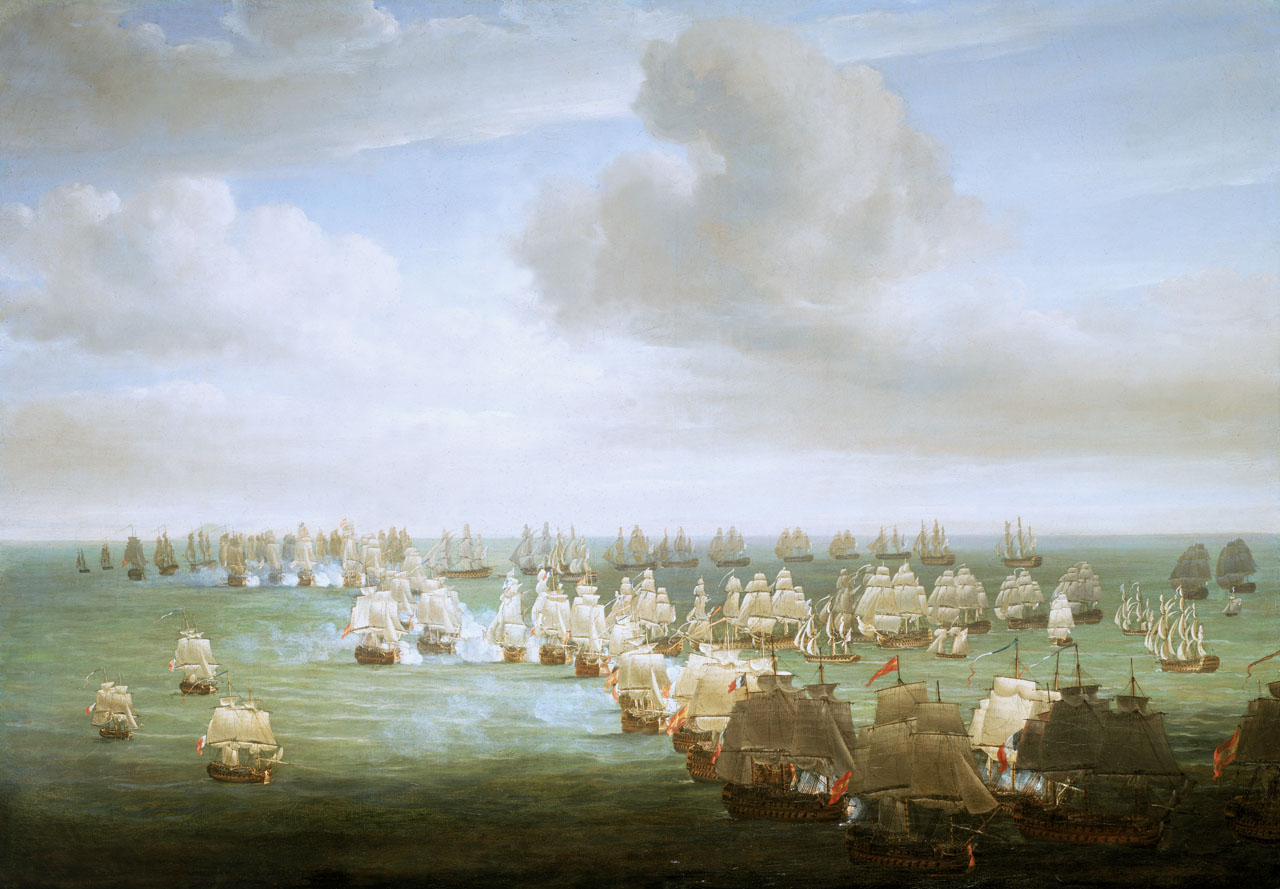 The Battle of Trafalgar, 21 October 1805: Beginning of the Action

An action during the Napoleonic War, 1803-15. On 15 September 1805 Vice-Admiral Lord Nelson re-hoisted his flag in the 'Victory', 100 guns, at Portsmouth and sailed to join Vice-Admiral Cuthbert Collingwood and re-assume command of the Mediterranean fleet off Cadiz on 28 September. On the same day, Vice-Admiral Villeneuve was ordered to sail from Cadiz for the Mediterranean with just his French ships. However, the Spanish were determined to accompany him. On the morning of 21 October the British found the Franco-Spanish Allied fleet, which reversed its course northwards towards Cadiz, forming into a somewhat disordered single column on the port tack in a light wind.

The British fleet was in two parallel lines, the left-hand or windward column being led by Nelson in the 'Victory', the right-hand or leeward one by Collingwood in the 'Royal Sovereign', 100 guns. Both lines intercepted the enemy at an angle from slightly astern of their beam, Collingwood engaging about one-third from the rear of the enemy line and Nelson just ahead of the centre. The action quickly became general and continued for over three hours, by which time 17 Allied ships had struck and one blown up.

Although no British ship was lost, the battle is important because of its conclusive nature and the fact that Nelson was among the dead. While the war continued for nearly ten more years, it was its last fleet action of major strategic import.

This painting is a bird's eye view from the north-east and shows the Franco-Spanish line being broken in two places. The division in the distance was led by Collingwood, and that in the foreground by Nelson in the 'Victory'. In the right foreground are the Allied fleet's van ships, the Spanish 'Neptuno', 80 guns, on the extreme right, half out of the picture then in starboard-bow view; the French 'Scipion', 74 guns, and 'Duguay-Trouin', 74 guns; the Spanish 'San Agustin', 74 guns, the French 'Formidable', 80 guns, and 'Mont Blanc', 74 guns, the Spanish 'El Rayo' 100 guns, and 'San Fransisco de Asis', 74 guns, the French 'Heros', 74 guns, and the Spanish 'Santissima Trinidad', 140 guns. Almost in the centre the 'Victory' rakes Admiral Villeneuve's flagship 'Bucentaure', 80 guns, from astern as she breaks from right to left through the Franco-Spanish line at the head of Nelson's division. Astern of the 'Victory', Nelson's line streams out to the right, in port-bow view. Accompanying it and nearer to the viewer are various British ships, including the frigate 'Euralyus', 36 guns, the schooner 'Pickle', 10 guns, the frigates 'Sirius', 36 guns, 'Naiad', 38 guns, and 'Phoebe', 36 guns, and the cutter 'Entreprenante', 8 guns. The British ship, 'Africa', 64 guns, is shown in port-quarter view, sailing to join the line. Beyond the 'Victory' are the rest of the Allied fleet, some of them in action with the 'Royal Sovereign', together with the leading ships of the British line. In the left foreground are three French cruisers in starboard-bow view; the 'Cornelie', 40 guns, 'Furet', 18 guns and 'Hortense', 40 guns.

The painting is one of a pair (see BHC0549) and one of a series of six paintings created for a two-volume 'Life of Nelson', begun shortly after Nelson's death in 1805 by Clarke and McArthur and published in 1809. They were engraved by James Fittler to be reproduced in the biography with lengthy explanatory texts. Accompanying the engraving is a plan with a key and a description.

The artist placed considerable importance on accuracy, referring to his annotated drawings and sketch plans in the production of his oil paintings. Pocock was born and brought up in Bristol, went to sea at the age of 17 and rose to command several merchant ships. Although he only took up painting as a profession in his early forties, he became extremely successful, receiving commissions from naval commanders anxious to have accurate portrayals of actions and ships. By the age of 80, Pocock had recorded nearly 40 years of maritime history, demonstrating a meticulous understanding of shipping and rigging with close attention to detail.
Back to Search Results
Buy a print License an image
Share:
Link copied to your clipboard!