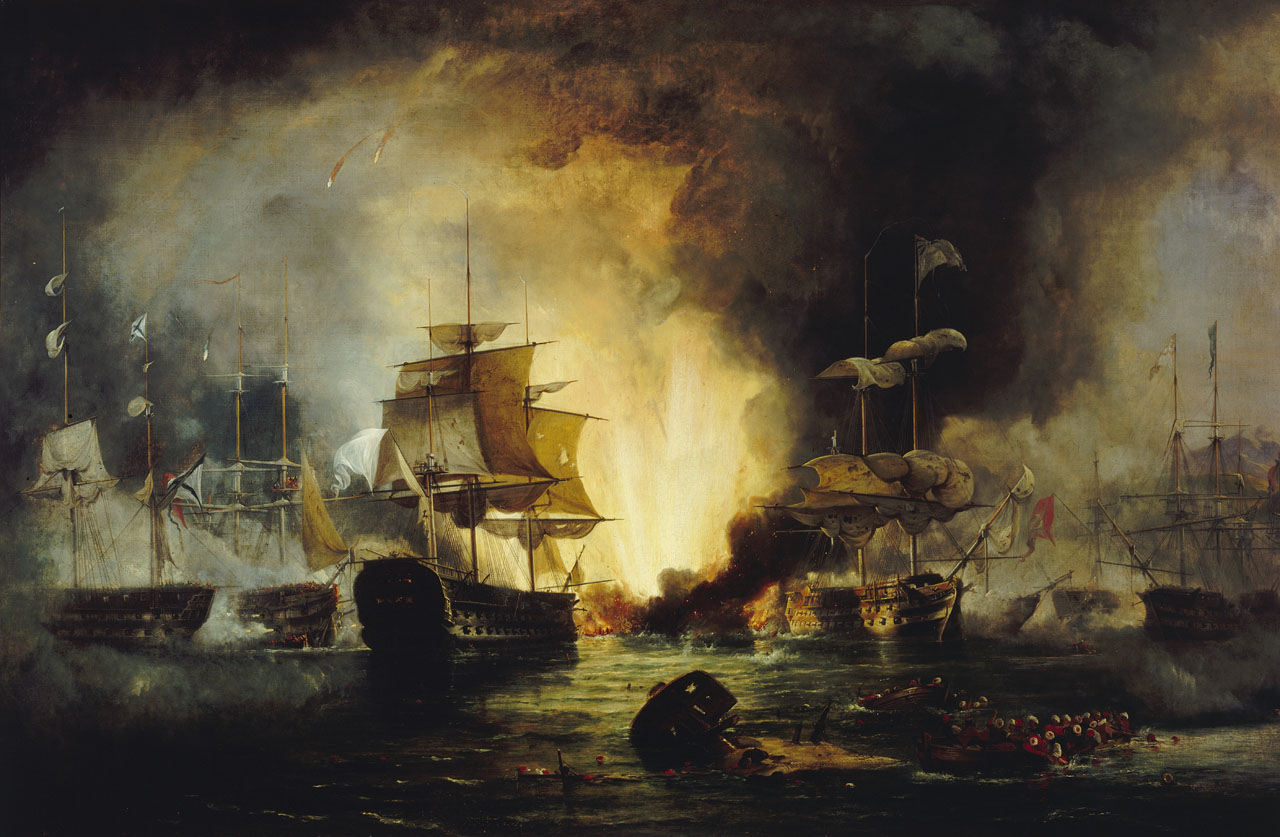 An interpretation of a naval battle during the War of Greek Independence, 1821-32. It took place when French, Russian, and British ships destroyed a Turkish or Ottoman-Egyptian fleet in the bay of Navarino - now known (both bay and town) as Pylos - on the west coast of the Greek Peloponnese.

Consequent to the signing of the Treaty of London in 1827, the signatories Britain, France and Russia were all committed to enforcing peace in the Archipelago and although Greece agreed to an armistice Turkey did not. Vice-Admiral Sir Edward Codrington, the Mediterranean Commander-in-Chief therefore tried to prevent the Turks supplying their troops in Greece. By 13 October he had been joined by the French squadron commanded by Rear-Admiral Henri de Rigny and by the Russian squadron under Rear-Admiral Count Heiden. The Turks then made two attempts to ship troops to Patras and so Codrington moved the Allied fleets into the bay, although the direction of the wind prevented him from doing so until 20 October. When they were in place, with Codrington on board the 'Asia', 82 guns, the objective was to prevent the Turco-Egyptian fleet from leaving. A Turkish ship opened fire, however, which led to the ensuing battle that continued for four hours and resulted in the virtual destruction of the Turkish fleet. The Allies did not lose any ships and this battle marked the last fleet action fought under sail.

In the foreground to the far left of the painting a Turkish 74-gun ship is being engaged to starboard. To the right of this, in starboard-quarter view, the French ship 'Breslau', 84 guns, is shown firing into the bow of the Turkish ship. Beyond her and to the right a huge explosion indicates one of the Turkish frigates blowing up. Just to the right of centre is the British 'Albion', 74 guns, starboard-quarter view, in action to port with a Turkish double-banked frigate, only the starboard bow of which can be seen through the gunsmoke. Also in the smoke, just to the right, is the port bow of a Turkish 74-gun ship engaging the British 'Genoa', 74 guns, in port-bow view. Past her stern the starboard view of the flagship of the Turkish admiral, Capitan Bey, is barely visible and is engaged to starboard by Codrington's flagship, 'Asia', in starboard-quarter view. The 'Asia' is also engaged to port with the Egyptian flagship of Mocharem Bey, barely visible through the smoke. Slightly nearer is the smaller French 'Alcyone', 10 guns, and the British 'Dartmouth', 42 guns, both in starboard-quarter view, with a glimpse of the British 'Sirene', 60 guns, beyond. On the extreme right, half out of the picture, is a stern view of the French 'Trident', 74 guns.

It is probable that this was the painting exhibited at the Royal Academy in 1829 and it is signed and dated 1828 in the lower right corner. Reinagle, the son of Richard Ramsay Reinagle RA, did several paintings of Navarino exhibited from 1829 to 1831, since he had accompanied Codrington's squadron through the Mediterranean and was an eye-witness to the battle. His early death terminated a promising career as a marine painter. See also Thomas Luny, BHC0622.
Back to Search Results
Buy a print License an image
Share:
Link copied to your clipboard!